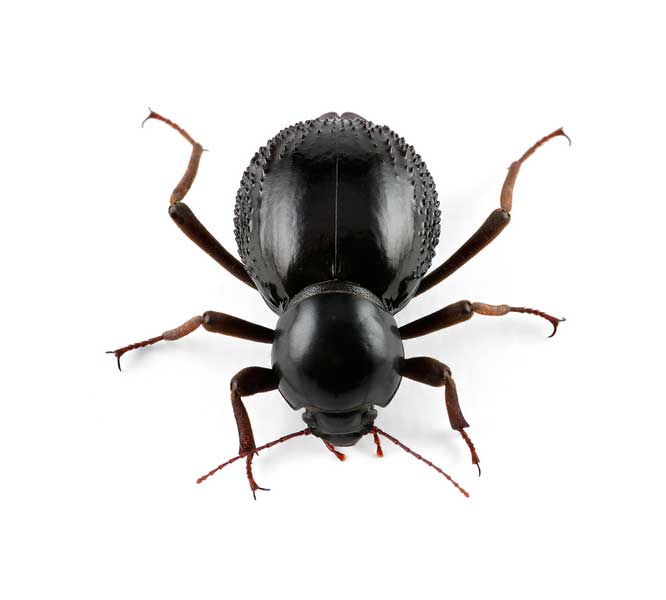 Beetles, the flying insects, commonly found on almost every continent, can be described as an invertebrate with hard and strong exoskeleton and rigid fore-wings. Like, every other insect, the body of a beetle is also segmented into three portions, the head, the abdomen and the thorax. Other than that, these insects also have six legs, and powerful jaws with A chewing organ. Most of the species are found in black or brown color, though there are some species that also have brightly colored body.

Beetles belong to the Coleoptera order, which has the most number of species compared to any of the remaining orders. Around 4, 00,000 species of beetles have been identified, and every year new species are being discovered. Hence, the identification of all the species is quite difficult, because each species have diverse characteristic and attributes. But, some of these species can be classified into two groups, namely, large beetles and small beetles. The click beetles are more elongated, flattened and brown in color. They attain a size of around 1/4 – ¾ of an inch. They are quite popular for a click mechanism ability they exhibit, which leads to snap their head back and thus propel themselves into the air. During this process, a “click” sound is created that helps to scare the predators. There are many types of ground beetles, hence each one differs in features from the other. Still, most of the species are found in metallic or black color. They also have a strong and hard wing cover, termed as elytra. The species like large Carabine has the Elytra fused with them, which disables them to fly. These large beetles grow about 2mm to 35mm in length. This long horned beetle is large in size, and has a cylindrical shape. The larvae of this beetle attain a length of around 80 mm, and the adult grows up to a maximum of 16cm. This gigantic species are mainly found in a black or reddish brown shade. A few species also display a gray or white band over their body. This species was named so, due to the distinctive and long antenna having 11 segments. The wings and thorax cover of some species have stout and small spines. The larvae, also known as round headed borers have a more elongated and cylindrical body shape, with large mandibles.

The Mealworms are actually large beetles that have a body size of 12-25 mm. The adults have a dark brown body, while the larvae are seen with dark yellow body, banded with brown color. The pupa form is more interesting with a white or cream body that has a pointed tail and large head. The adult form of this species grows about 5/8-1 inch long. Most of the species in this group are grayish black or brown in color. The cover of the wings, displays distinctive white, small lines, and the back portion of the head is beautifully segmented into two shiny areas. The long antennae, may be longer than the size of the beetle, and is situated in this shiny segment behind the head. The larvae form of this beetle is cream in color, and features large round heads. It possesses three eyes on all sides of its head, and also has dark mandibles. Weevils are a large group of beetles displaying a wide range of body shapes and colors. Many types of weevils have an oval-shaped or slender body. Each species show different features; hence the length of this beetle ranges from 3-10 mm. Most of them are black or brown in hue, and can be seen covered with shiny hair or scales. The most unique feature is the shape of its head. The adult possesses elongated and large head that develops into a snout. In some species the snout is as big as the beetle”s body. The most common species in the beetle family are the Black Carpet beetles. These insects are small in size even in their adult form that reaches up to mere 1/4th of an inch. The larvae also have the same length seen in adults. The only difference is that the larvae possesses thick tuft of lengthy bristles over their body. As the name suggests, their body has a black shade. This typical type of beetle is found on the windows inside the house. The Lady beetle is commonly referred to as those from theCoccinellidaefamily. The size of this small beetle ranges between 0.8 and 18 mm. As there are numerous species counting to around 5,000 that exhibits wide range of features, the color of their body also changes from one type to another. They can be commonly seen in orange, yellow, scarlet and other bright colors, along with black colored small spots on the covers of their wings. They have black colored legs, antennae and head with a colorful body. Rarely, few species like Vibidia Duodecimguttata display a brown body with 12 white spots. The Elm Leaf Beetle is biologically termed as Xanthogaleruca Luteola, and is a pest species. The adult beetle is 1/4th of an inch in size, and has an olive green color with longitudinal, black stripes on the back. The eggs laid by the females are often yellow in color, which turns into a grayish color before hatching. Immediately after hatching, the larvae has a black body, and resembles a caterpillar in structure, but later, after it starts feeding, the black color is transformed into green or yellowish shade. When the larvae reach the third Instar stage, they attain a length of 0.85cm. At this stage, the larvae also exhibit a thick row of dark-shaded tubercles that look like two black colored strips on their side portion. In the pupa stage, the beetle transforms into yellow or orange color. The Larder Beetle is a small type of insect that reaches a length of approximately 7-9 mm (0.34 inches), and has a dark brown colored body. It also exhibits six dark shaded spots on the yellow colored band. The legs and the under portions of the body are densely covered with yellow shaded hairs. The larvae form of this beetle attains a length of approximately half an inch. It features two spines in a curved form, located on the last segment of the body. Similar to the adult beetle, the larvae are also covered with hairs. These beetles are tiny in sizes that grow up to 1/8-1/3 of an inch. Almost all species out of the 6000 are dark brown or black in color. Their body is cylindrical and hard-shelled. This group of beetles displays a wide range of features in terms of structure and shape. The larvae form of this beetle is an off-white insect with dark brown colored head.