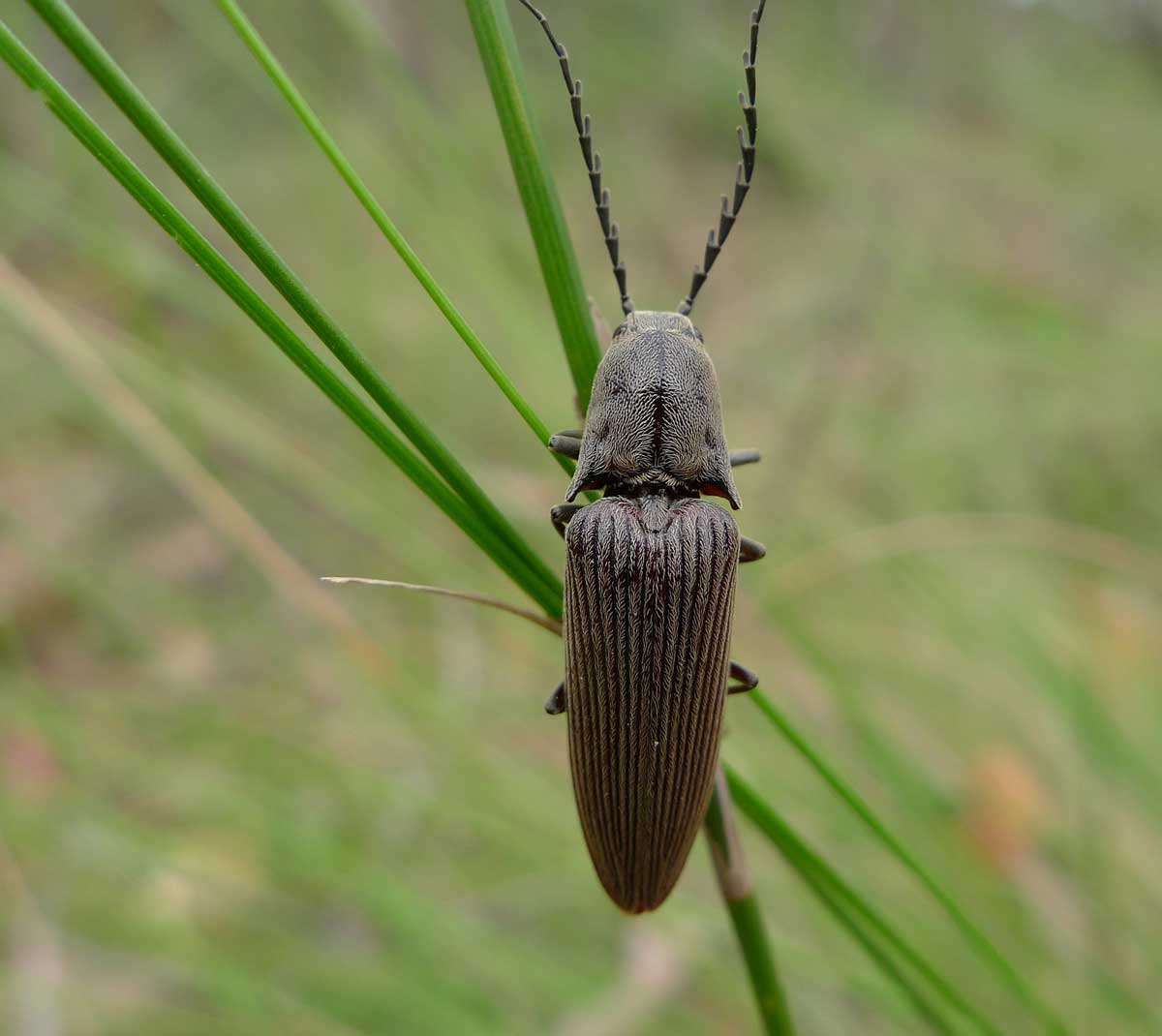 The invertebrates belonging to the Elateridae family are termed as “Click Beetles”, or sometimes “Typical Click Beetles” to differentiate them from the other related beetles from the Eucnemidae and Cerophytidae families. The other commonly used terms to refer this beetle are Snapping Beetles, Elaters, Skipjacks or Spring Beetles. Around 9300 identified species are seen worldwide, and more than 965 known species are present in North America.

The structure of Click beetles is large, and reaches only up to 2 centimeters in length. They are mainly seen with a brown or black body. It is less attractive due to its dull pattern and color. The adult click beetle is typically Phytophagous (feeding on plants) and nocturnal, but is not considered of any economic or environmental importance. Though it enters the house during hot climates at night, this beetle is not considered as a serious pest. But the larvae form, also known as wire-worm is a dangerous agricultural pest. It is a Saprophagous that feeds and lives on dead plant and animals. Some other types feed on other insect larvae. A few species of Elateridae from the genus Pyrophorus have bioluminescent organs in adults as well as in larvae. The larva is more elongated, slender, cylindrical and flattened in appearance. The exoskeleton is hard, just like the meal worms. The expected lifespan of this creature is around 2 to 5 years. The hinged thorax of the click beetles helps them to flip back into position on its legs, even if it is on its back.

This beetle can be found throughout the world, especially in the areas having warm climate conditions. They are more attracted towards dense vegetation and dry tropical forest areas. Hence, this beetle is widespread in all the areas of Costa Rica, especially in the Guanacaste Province situated in the North West. They are also commonly found near the deciduous woods and regions covered with hardwood trees like Oak, Apple, Cherry. This beetle is highly attracted to the lights, which is why they an be seen inside the house when it is hot.

The unique structure of the click beetle”s body, the hinged joint situated between the thorax and the head helps it to arch back and snap the portion of the hinge. This clicking mechanism helps it to propel it up in the air up to a height of 6 inches. This technique is more commonly used to protect itself from the predators. The click sound created while propelling scares the approaching predators and they prevent them from attacking these beetles. Other than that, when it is approached by a predator, it pretends to be dead by lying down, until the predator leaves, thinking that it is a piece of wood.

Basically the click beetles are nocturnal in nature. The adult form feed on nectars and pollen of the flowers. The larvae beetle is quite a serious pest as it feeds on the roots of corn, vegetable and flower plants. It also thrives near the stumps of Cherry, Oak or Apple tree to feed on the larvae of the other wood-boring insects.

Click beetles perform many different activities before and during the mating period. They vibrate or shake the organ on which they stand to mate. They mostly indulge in the mating process during the summer climate. The female lays a dozen to hundreds of eggs in the soil.

The species of click beetles inhabits the soil, and passes through 4 stages in its whole life cycle. The female click beetle lays eggs that are deposited at the plant bottom and cover up them up with soil for protection from the predators. It takes few weeks to hatch. The egg emerges to form the wireworms, the larval form that has a cylindrical wiry hard body. Some species live for more than 1 year in this stage. From this stage, the beetle metamorphoses into a pupa. Most of the beetles overwinter as a pupa. Different species take different periods to pupate or transform into adults. The larvae or the adult form overwinter in deep soil, at lest 9 -24 inches deep. During the spring, as the temperature of the soil reaches around 50-55 degree Fahrenheit, the larvae or the adult moves towards the surface of the soil. The pupa form looks similar to that of an adult beetle, but beetles at this stage are usually inactive, and prefer to rest. After a few days or weeks, an adult beetle emerges from the pupa form, and spends the further few days within the cell in the burrows made in the soil, until the fall or summer of their last year is over (The larval life can extend up to 4 years). They come out of the soil only after the following spring. The female adult beetle emerges out of the soil to attract the male beetles for mating. They again burrow into the soil to deposit eggs. They keep on repeating this for laying many eggs.

An adult click beetle has a unique click mechanism that has a lot of benefits, out of which, scaring the predators is the most significant. They startle the predators with the powerful click sound. Many species of this family try to hide during the daytime to prevent the predators from attacking them, and are usually seen active at night. Some of the common predators attacking this beetle are bats, birds, lizards, frogs and the praying Mantis.

Thought the adult does not cause much damage, the larvae form cause destruction to the plantations. The shiny and narrow wingless insect known as wire-worm is the larvae form of this click beetle. They spend most part of their life in logs and rotted stumps. They primarily consume the roots of vegetables, flowers and other crops like grains, corn, potatoes, grasses, beans, carrots, beets, onions, lettuce, turnips and other seeds producing plants. This may also lead to hindrance in germination of these seeds. Even if the seeds germinate, the plants may grow weak, thin out and eventually die. Hence, farmers consider them to be serious pests that can cause a very large damage.

To prevent these beetles from invading your premise, start cleaning your yard. Remove every odd thing that does not belong to the yard like tree logs, fire logs, stumps and other debris, as it may be used by these larvae as a refuge. Close the windows and doors before you switch on the lights. Some experiments prove that using yellow lights are also beneficial. You can also seal all the air holes and other gaps in your home to avoid their entry through such spaces. If all these methods do not work, then you can go for a pesticide or a chemical to prevent these insects. Just dust the residual chemical granule all around your house, which will kill not only the adult but also the larvae.