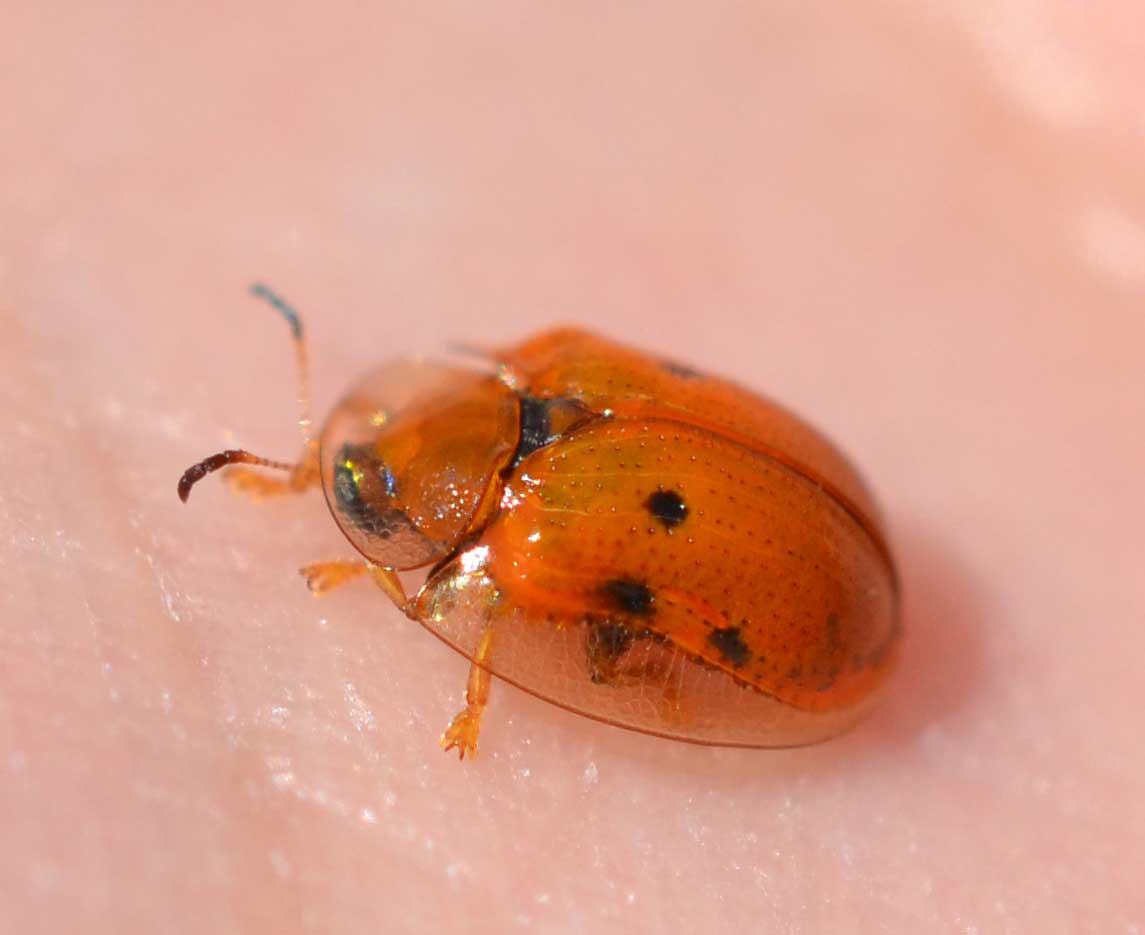 The golden tortoise beetle, scientific name Charidotella Sexpunctata is a type of beetle from the leaf beetle family Chrysonmelidae that is indigenous to America.
This beetle has a strong association with the plant family Convolvulaceae, which includes Morning Glories, Sweet Potato and Bindweeds. The larvae and these mature beetles eat leaves for their staple food.
The golden tortoise beetles lay a collection of around 20 white and flat eggs on the backs of the leaves or on the stems. Within 5 to 10 days, the brownish red or yellowish, spiny larvae come out of the egg. The larvae build up frass (the excrement of insect larvae) and already shed skins on a configuration named anal fork; this is positioned above its body in the form of a fecal shield, as a camouflage from its predators. Normally, the golden tortoise beetles are effective when the insect predators are small and do not go for the big ones, like the Hemipterans(Insects0 or Cicada, Aphid,or Leafhopper..Two to 3 weeks hence , it turns into a spiny pupa covered with brown frass, and later, after 1 or 2 weeks , it becomes an adult.

The length of the golden tortoise beetle is 5 to 7 mm. It varies in color from orange to gold. And mostly metallic, gaining the nickname, “Goldbug”. The outer margin enlarges, in the absence of pigments, appearing almost transparent. According to the season, its color changes. Besides, when it is threatened, changes its color by the fluid flow amidst the layers of its cuticle. When it is worried, it changes from shiny gold to dull brown.

There is limited knowhow of the golden tortoise beetles, possibly a reflection of its meager economic significance. In the States towards the North, every year, only one generation exists. In New Jersey, the first beetles appear in May or June. They initially feed on weeds and immediately lay their eggs. A new generation of mature beetles appears in July. Prior to going into diapauses (A state of dormancy), the newly appeared adults feed for a short time till the coming spring appears. It takes 40 days for development from the eggs to adult stage.

The larvae, as well as the adult Golden tortoise beetles feed on leaves. They use a particular method to damage the leaves; making a number of tiny holes, from medium size to irregular shaped holes. The larvae and the adult inhabit the bottom surface; however, they eat the whole foliage. They are not yet considered as a real pest.

The white colored eggs stick to the bottom of the leaves or stems. The eggs are flat and oval in shape and have a length almost 1 mm. They hatch with 5 to 10 days. They deposit around 20 eggs in a cluster
The adult beetles are distinguishable by their margins of Elytra and the Prothorax enlarged, sufficiently enough to hide its appendages and head. There are no pigments seen when the margins are expanded, they appear almost transparent. The beetles eat anything. In case the desired plants are unsuitable for them, the beetles go into the weeds growing all about the garden, the usual ones being, Horse Nettle, Thistle, Bindweed and Burdock that are available around the places.

There is a possibility for the golden tortoise beetles turning useful, since they migrate to weeds in the absence of anything to eat. By creating an unwelcome approach to the useful plants, The Golden Tortoise Beetles hardly become a pest because they make the weeds in the garden as their favorite food.