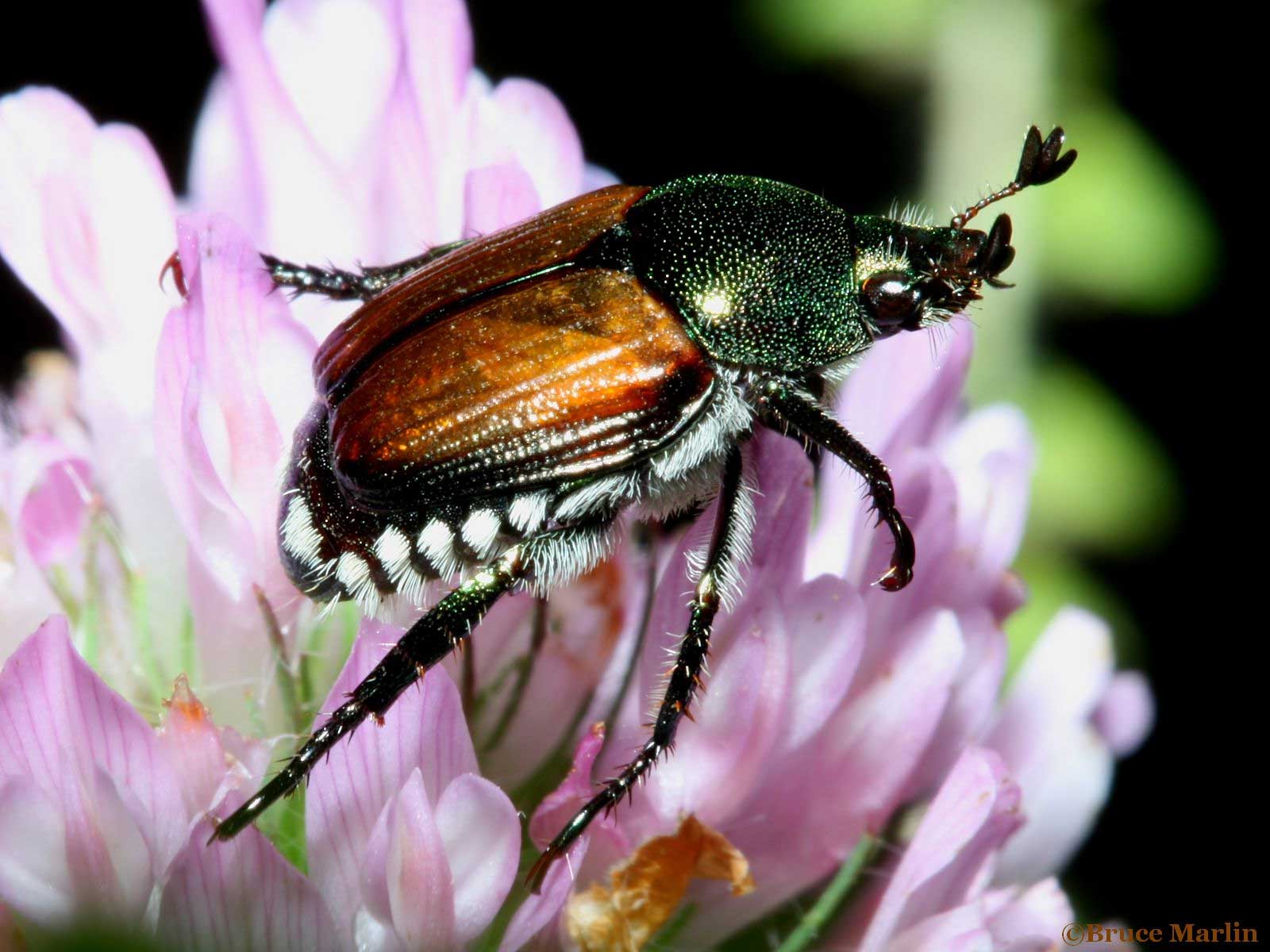 Popillia Japoica Newman, commonly referred as the Japanese beetle is a destructive pest, widespread on the landscape, ornamental plants and turf in the areas of the United States. It is also considered as pests that destroy the fruit, filed crops and garden plants, and host of a range of above 300 species of plants. This adult beetle primarily feeds on the foliage, fruit and flowers of the plants. They harm the leaves and skeletonize it by leaving only the veins. The larvae form of this beetle is commonly referred as white grubs that primarily feed on grass roots. This feeding habit destroys the turf present in the lawn, golf courses and parks.

Japanese Beetles are considered serious pests. Read about how to get rid of Japanese beetles. The adult Japanese beetle is quite attractive, and attains a body size of 8-11 mm in length and a width of 5 -7mm. The body color of this beetle is metallic green, and the wings are coppery brown or bronze in color. It also possesses a five white hair patch on both the side of the abdomen. Another pair is also found near the last segment of the abdomen, which is the main distinguishing feature between the Japanese beetle and the other beetles. The eggs are spherical, slightly cylindrical or ellipsoidal that has around 1.5mm diameter. It looks transparent or sometimes milky white. The larva is also creamy white to transparent in appearance, but its head is yellowish brown in color. The larval form is also found with dark and strong mandibles. The pupa attains a length of 14mm and a width of 7mm. Its color is between pale cream and metallic green, which depends on the age.

Most of the Japanese beetles found in different range of habitats is seen with only one generation in a year, except the few in the colder climate areas, where they may take two years to complete their life cycle. Though the male beetle emerges before the female, eventually the sex ratio of this beetle population is 1:1. Most female adults lay their eggs in the nearby vegetation, or in the soil burrow that has a depth of 2-4 inches. A total of 40-60 eggs are deposited by the female beetle. The places preferred by them to lay eggs are in the lawns, gardens, golf courses or even in agricultural fields. The eggs hatch in between 10 and 14 days. The first beetle Instar eats the nearby organic matters and rootlets for around 2-3 weeks, and then molts into the second Instar. It takes another 3-4 weeks to molt, and the third Instar emerges. This beetle overwinters in this third Instar form. When the temperature falls below 10 degree C, it reaches to a depth of 5-15 cm in the soil. As the spring begins, this grub emerges to the soil surface near the roots of the plant to continue the feeding process. This continues for 4-6 weeks, after which they get ready to pupate. The pupal period continues for about 1-3 weeks, after which, the adult beetle emerges.

The mating process in Japanese beetle occurs as soon as the adult beetle emerges. The virgin female beetle releases strong sex pheromones which have the ability to attract many male beetles. When the attracted male beetles see the female unmated beetle, they gather around in a group, which is called beetle “balls”. But mating in such situations rarely occurs.