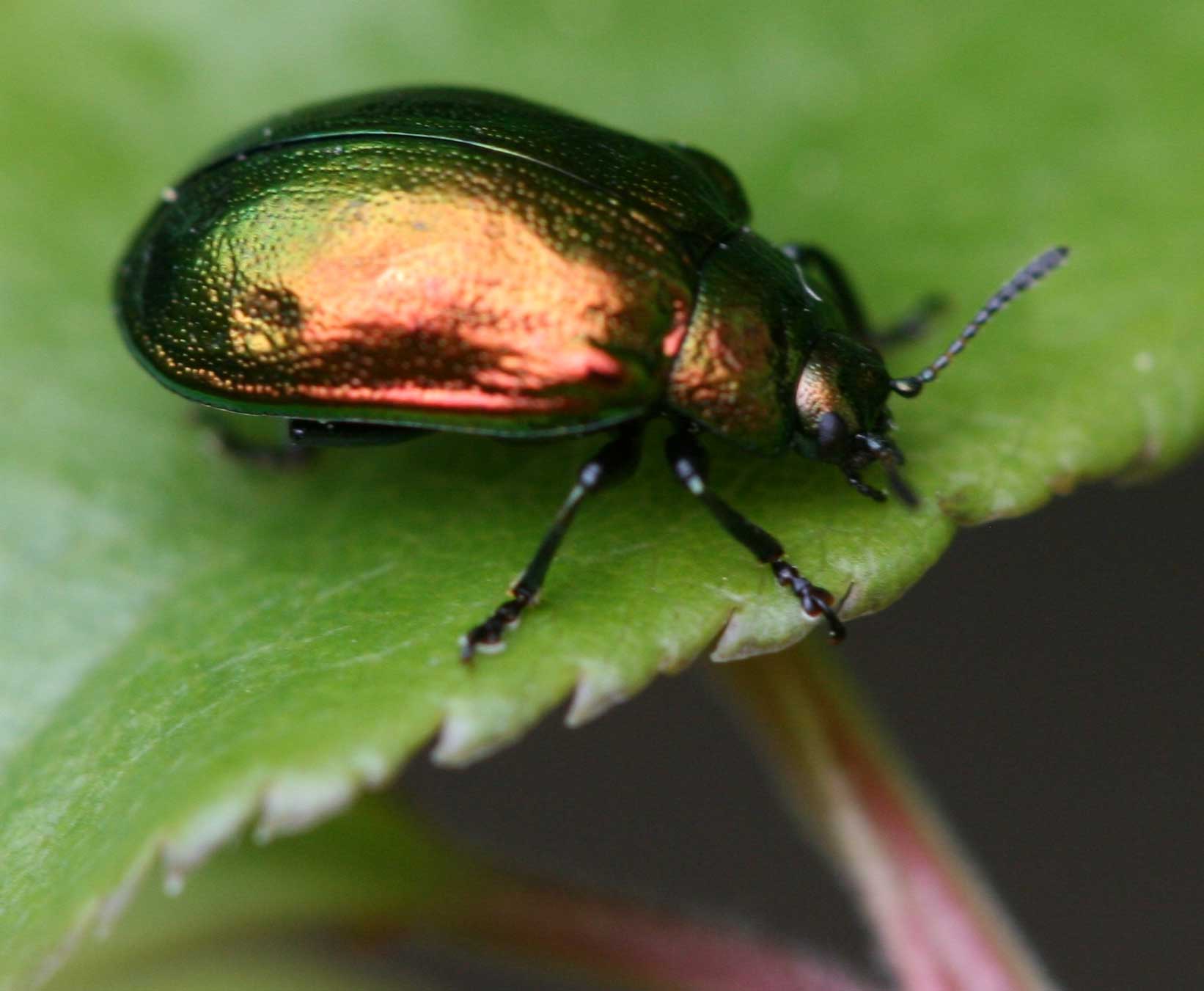 The Chrysomelidae family is a group of beetles, that are commonly referred as Leaf Beetles. This family comprises of more than 35,000 species, classified into over 2,500 genera. Hence, it is considered as one of the most common and largest beetle group, from which many species can be encountered very commonly.

The adult leaf beetle attains a length of 5 -15 mm, and has a brightly colored body. Different species have different features and body shapes. Some are oval shaped, whereas some have elongated and more flattened shape with a dark head. They possess antennae that are half of their body length. The most amazing feature of this insect is that it can easily hide its antennae and legs inside their cover of the wings, especially when it is seated on a leaf. These beetles are related to the Longicorn Beetle species, and both possess a very similar body shape.

The leaf beetle species predominantly feed on Acacia and Eucalyptus leaves. The larvae and the adult leaf beetle feed on plant material, and store the chemicals gained from the plants in their body. Thus, they are poisonous to those who eat them. This also makes their body color become brighter.

Leaf beetles are considered as a common pest group that attacks numerous type of shrubs and trees, found in the Minnesota landscape. There are many types in this group, but the most commonly seen are the Elm Leaf Beetle, Cottonwood Beetle and Imported Willow Leaf Beetle. The larvae of all these beetles look very similar, and the damage caused to the host plants are also same, but there is a difference in the life histories of these beetles. Please see below: Identification
The adult Elm leaf beetle grows from 1/4- 3/8 of an inch. It has an oval shaped body with an olive-green or yellow shade, along with dark longitudinal stripes that extends near the wing cover length. Behind the beetle”s head, there are visible three black patches. The larval form attains a length of ½ an inch, when completely mature, and exhibits a dull yellow body, designed with black lines. The Elm leaf beetle eggs are yellow to orange in shade and are produced in clusters. Just before hatching, these eggs turn purple-black in color.

Life History
The adult beetle overwinters in secure locations, like under the bark of loose tree or inside their homes. As soon as the buds of the Elm tree starts to expand during the spring, these beetles approach those buds to begin the feeding process, and lay eggs on the underside of the leaf. After the larva emerges out of the egg, it starts feeding on the leaf, giving it a transparent appearance by leaving only the central veins. Such feeding manner is termed as “window feeding”. The destruction of the leaves increases to a greater extent, as their feeding increases to the lower and the upper side of the leaves, when the larva matures. Heavy infestation may give a complete brown appearance to those affected trees, and also lead to early dropping of leaves. But, the adult beetles comparatively cause less damage to the plants, as it only creates holes in the leaves, which are not very hazardous. Within 2 to 3 weeks, the larvae matures and stop feeding, after which, they migrate into the soil from the feeding sites to pupate. The adult beetle emerges within a period of 1 to 2 weeks, after which, soon a second generation is produced. Identification
The adult Willow beetle attains a length of 1/8″ to1/4″, and has a shiny greenish blue to black colored body. The shape is more oval and long. The larva of this beetle is 1/4″ in length and has a black shade, whereas the eggs are pale, shiny yellow that are deposited in an irregular group.

Life History
This beetle overwinters in the form of an adult near any secured area like the trunk of a tree. They usually exist during the spring, when the host buds expand and starts to produce notches and holes on the leaves. Later the egg laying process begins, and within a few days, the eggs hatch to form a young larva. This larva also feeds on the leaves, skeletonizing it by chewing the lower and upper surface of the leaf. This feeding increases in rate, as it matures. Within 3 to 4 weeks, the larvae transform into a pupa, which ultimately emerges into an adult Imported Willow leaf beetle. Identification
The adult leaf beetle attains a length of 5/16th of an inch and has a black thorax and head. The thorax is seen with yellow margins, and the wing covers have a yellow shade with many black lines. The young larvae are black in color with 2 white patches on both sides. When the larva matures, it reaches a length of half an inch. The eggs of this species are deposited in clusters, and have a lemon-yellow shade.

Life Cycle
Even this beetle overwinters in the form of an adult in protected and secured locations like, inside the debris or loose bark. As soon as the leaves of the host plant expand in the beginning of the spring, these beetles migrate from the overwintering location to feed and lay eggs. The eggs hatch after 1 to 2 weeks, and young larvae emerge from it. This young larva feeds on the underside of the leaf, and as it matures, it feed on the underside as well as the upper side of the leaf, giving it an appearance of a skeleton. From the larval stage, it transforms into a pupae within 2 weeks on the leaf surface. Later, again after 2 weeks, the adult beetle emerges out of the pupa form.

In normal circumstances, the damage caused by the leaf beetles does not harm the health of the plants/trees. But, there are some species that can completely stress the shrubs or trees and even kill them. This commonly affects the recently transplanted or very young trees. Other stressed trees due to the factors like diseases, insects or environmental can also succumb. Heavy defoliation is the other after effects of beetle infestation that can also cause a healthy tree to weaken within a stretch of a few years, and ultimately die.
The other nuisance caused by the Elm leaf beetle is invading the houses for shelter during the harsh weather. Though they do not bite, sting or reproduce indoors, they can spread in all the rooms of the house.

Use conventional pesticides like carbaryl (Sevin), acephate (Orthene) and many others that can effectively control the Leaf beetle population. These sprays should be used on the foliage to kill the larvae, which are very difficult to terminate, if matured. The other effective methods are “Trunk banding” and planting repellent plants to prevent these beetles in your property.