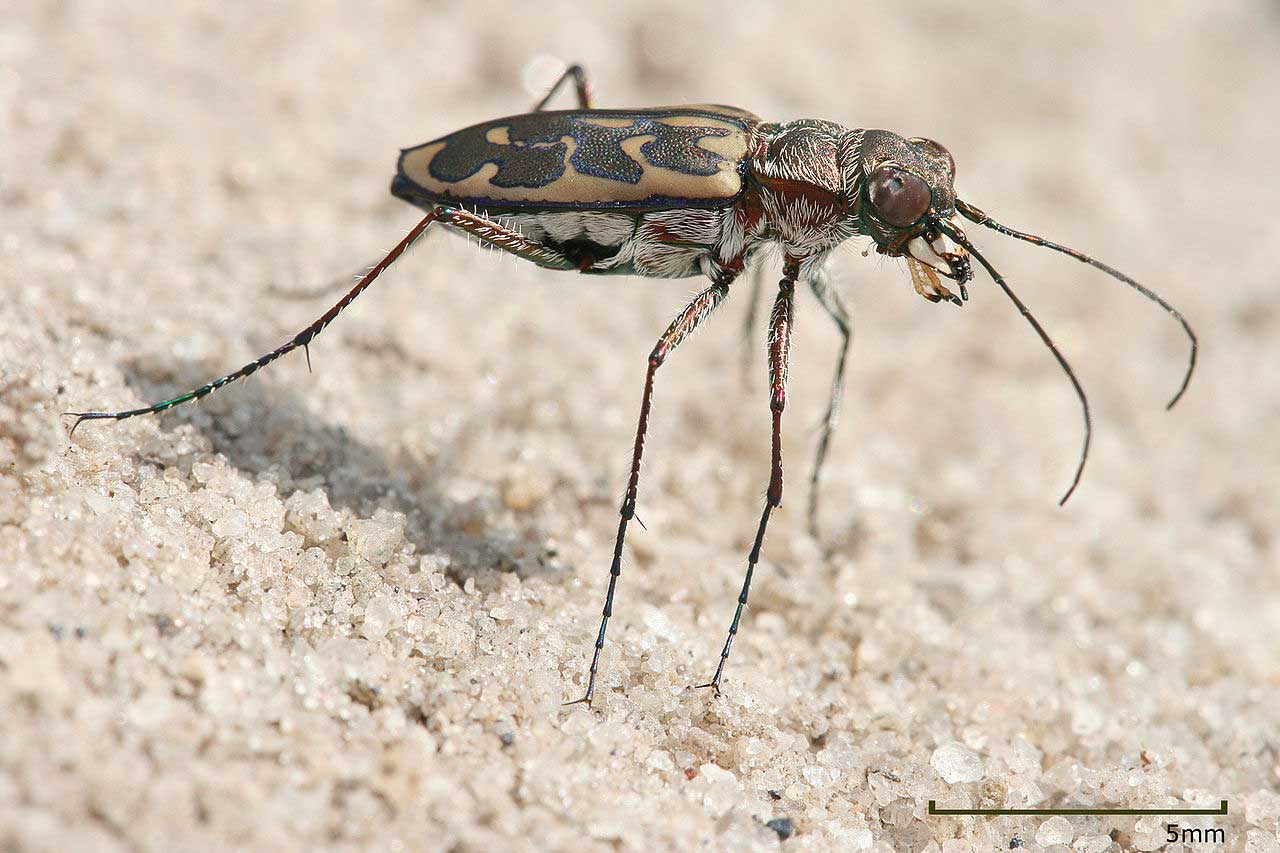 Traditionally, the Tiger Beetles were considered to be the members of the Cicindelidae family, but the new theories suggest that these beetles actually fall into the group of Carabidae family of ground beetles. These beetles are quite renowned for their aggressive habit of predation and their running speed. One of the tiger beetle species of this group has the fastest speed of approximately 9km/ hour.

The Tiger Beetles are usually seen with large and bulged eyes, curved and long mandibles and long, slender legs. It can be easily recognized by its green colored body with bronze tints over it. Both larvae and adult beetles are basically predators in nature. Many species are found in black colored body, whereas the species of both Tetracha and Cicindela are seen in the bright red shade. The Tiger beetle larvae have peculiar features like large head and humpbacked grubs.

The Manticora genus of the Cicindelinae subfamily is the biggest in size. Tiger Beetle is distributed well in all the continents. They are predominantly found in the South Africa”s dry region. The genus Cicindela comprise of species with a cosmopolitan distribution. The Tiger beetle is found in the sandy habitats like river sandbars, mudflats, rocky outcroppings, dunes, ocean beaches and paths along the woodland.

The larvae form of the tiger beetle is usually seen inhabiting in the cylindrical burrows, which is at least one meter deep. To catch the prey, this insect flips backwards and captures the invertebrates that wander around the ground. This insect is well-known for their aggressive predatory habitsand the speed of running to catch the prey. They are fast on their wings while they see the prey.

The Tiger Beetles emerge from the eggs. Eggs are deposited in the burrow created by the ovipositor of the female beetles in the soil. The female generally conceals the site of the ovipositor (organ used by some animals for the laying of eggs) to avoid the predators attack. The newly-emerged larvae find out the way from the burrow to the surface of the soil by enlarging the hole. This is done by slacking the soil with the help of its mandibles, thorax and head. The larvae undergo three stages, and at each stage, it enlarges the size of the burrow. Around 18 inches deep burrow is created by this insect. At this larvae stage inside the burrow, it can live without food, and can also thrive in temporary flooding condition. It does not leave the burrow, but waits outside the entrance to catch the small arthropods. The third and final stage of the larvae creates a pupal cell inside the burrow. The entrance of the burrow is plugged with soil before the pupation process. In this stage, the transformation from the larvae to adult takes place. The period of pupation lasts for more than three weeks. After emerging from the pupa form, the adult beetle stays idle for at least three days. After that period, the adult beetle emerges out of the burrow with hardened exoskeleton.