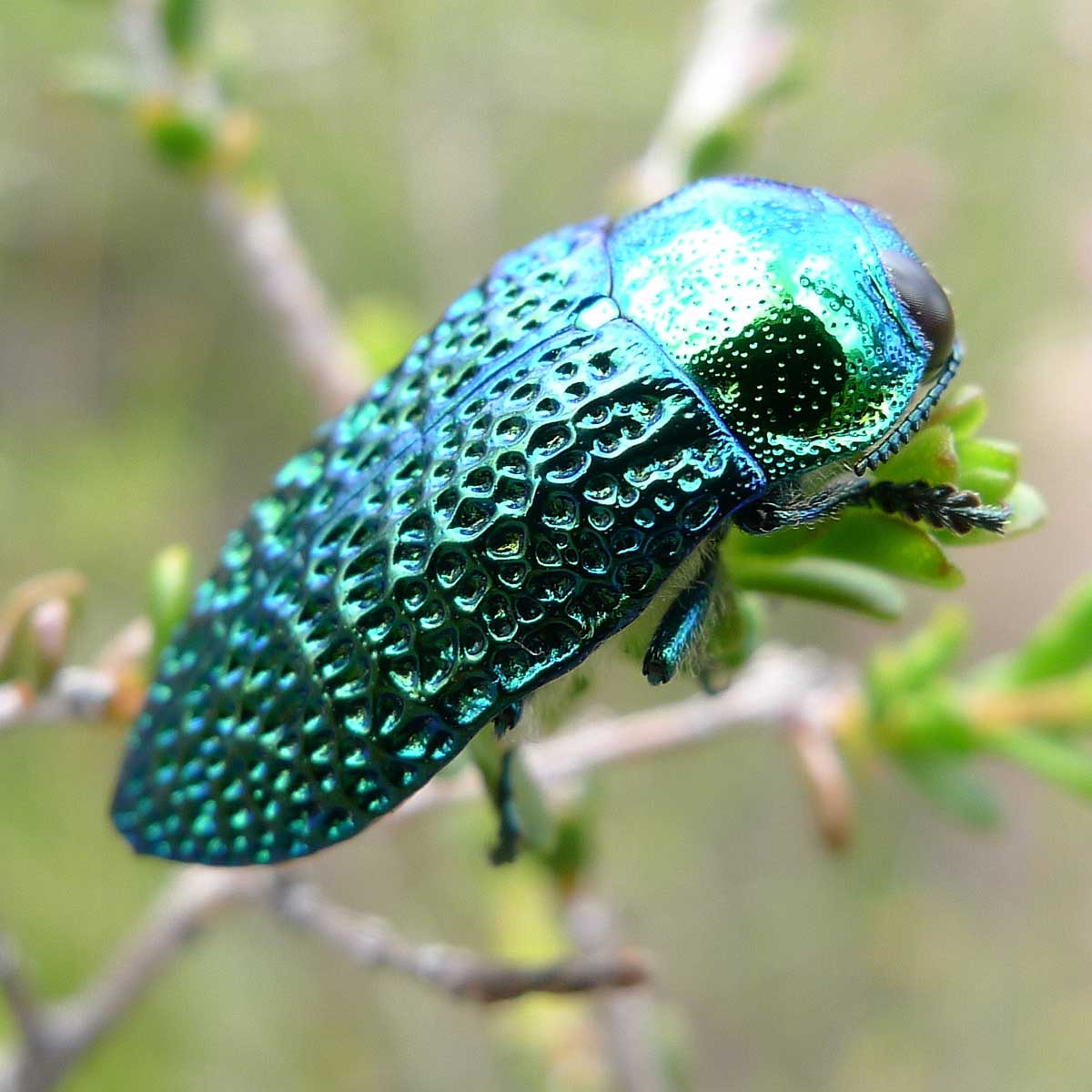 The Buprestidae family of beetles possesses a shiny, sparkling color because of which it is called metallic wood boring beetles or jewel beetles. This family of beetles comprises of the largest group of beetles consisting of 15.000 varieties, of the 450 genes. Apart from this, approximately 100 types of fossils were described.

The bigger the beetle, the more famously it is colored. The jewel beetles fetch a high price from those who collect insects. The elytra of certain varieties of Buprestidae were customized in beetle wing Jewelry. In certain countries like Thailand, India and Japan, it is used for decorative purposes,

The shape of the Jewel beetle is normally elongated or cylindrical and up to a length of 3 to 80 mm (0.12 to 3.15 in.), even if most of them do not exceed 20 mm. (0.79in.). The large varieties belong to Chrysaspis, Cataxantha, Megaloxamtha and Euchroma. In the confusing patterns, we often see an assortment of brilliant colors. The iridescence seen among beetles is not because of the pigments present in the exoskeleton system, but it is because of their structural colors, where, the microscopic textures present in their cuticle distinctively reflect certain frequencies of the light in a special direction. This is the very same effect obtained when many colors are reflected by a compact disc.

The larvae that hatch from the majority of species come out through shrub roots or trees, leaving behind tunnels, flat in shape. Their plump bodies too are flat in shape, having large prothorax. They are transformed into the pupa stage, while still under the surface of the wood and appear into the ambiance as adult beetles.

The life span of the jewel beetles is very short. The majority of them survive for hardly a few days or weeks in their adult stage. There are a few that do not survive for even a day. Jewel beetles begin their life in the form of larval grubs, normally within trees, beneath the bark. The juvenile beetles manage to survive in the trees” wood till they are transformed by metamorphism into adult jewel beetles. Once they are adults, they bore the wood and fly out searching for their mate. This happens, normally during the spring and the summer seasons. Further, they mate, lay eggs and die.

The larvae finds its way through burrowing the woods and roots, from beneath the bark to the cambium layers; otherwise they occur as leaf and stem miners of the woods or herbaceous plants, in which grass is also included. The majority of the varieties that bore wood, destroy trees or branches that are weak and dead on healthy trees. Just a few bore into healthy green trees. Certain varieties generate galls on roses, alder, ironwood, blue beech, and hazelnut; some survive on herbaceous plants and pine cones.

The diet of these jewel beetles varies according to the species they belong to, As for the species that live in soil, the majority of them eat rotten plants and decayed wood. Thus, feeding them is not an issue, just supplying them with rotten wood and leaf litter is sufficient. They do not prefer green wood and fresh leaves. Leaf litter and decayed wood are available in any woodland areas and in the forests. It is possible for you to gather them with a spade or with your hands together with a little sand. Ascertain that soil containing conifer or pine trees is not taken. This is because the needles in these trees are not digestible by the beetle larvae. Add the decaying stuff to the soil in which the larvae are kept. The larvae normally eat the material kept on top of the soil; however, it is preferred to mix the material evenly in the soil. A little cat food added to the soil, boosts its growth. Confirm that the soil is sufficiently moist so that the beetle larvae are able to eat them.

Some varieties of jewel bugs attract mates by using sterna exocrine glands or Chemical secretions from their dorsal abdominal. In some genus, such as the Tectocoris, Odontoscelis, Psocosto and Lrochrotus, the males have typical unicellular glands, situated in the abdomen called Androconia (AmateurEntomologists’ Society– scent scales on the wings of adult male insects). When they are ruptured, they release sex pheromones, through an ectodermic gland opening via the oviduct. They are used as storage space for the sperms that are deposited by the males. The spermatheca contains glands that nourish the spermatozoa till they are capable to discharge fertilized eggs.

The male jewel bugs belonging to the Hotea genera have an extraordinary large, healthy and spiky Sclerotized Genitalia. This is used for the practice of mating called traumatic insemination; this is an outcome of the sexual conflict. The male Hotea Bugs rip through the female reproductive duct in order to deposit the sperms, imposing enough damage to the female in the sexual activity.

The larvae drills through logs, roots, leaves and stems of different species of plants extending from grasses to trees. Those who bore wood normally favors the dead or dying branches of perhaps healthy trees, whereas certain varieties assault green wood; Certain varieties are dangerous pests having the capacity of destroying trees leading to serious economic destruction, like the invasive Emerald Ash Borer. Certain varieties have affinity to the forests that are recently burned, for laying their eggs. They are capable of sensing smoke of pine wood from a distance of 50 miles and are also efficient to see infrared light, assisting them to enter in while they approach the forest fire.

Ten varieties of flat headed borers belonging to the Buprestidae family feed on fir and spruce, however the majority is found in dead or dying trees, or adjacent to live or damaged trees. The damage is grave only if a regular supply of breeding stuff is obtainable. The biography of these borers and that of the round headed ones are similar; however, a few reach adverse situations where their life cycle exceeds the limit. Fully developed larvae, as long as 25 mm, have a basic flat design, where the back portion of the body is broader than the remaining part. The bronzed adults are normally visible only where proper substance is available, and in sunny locations.