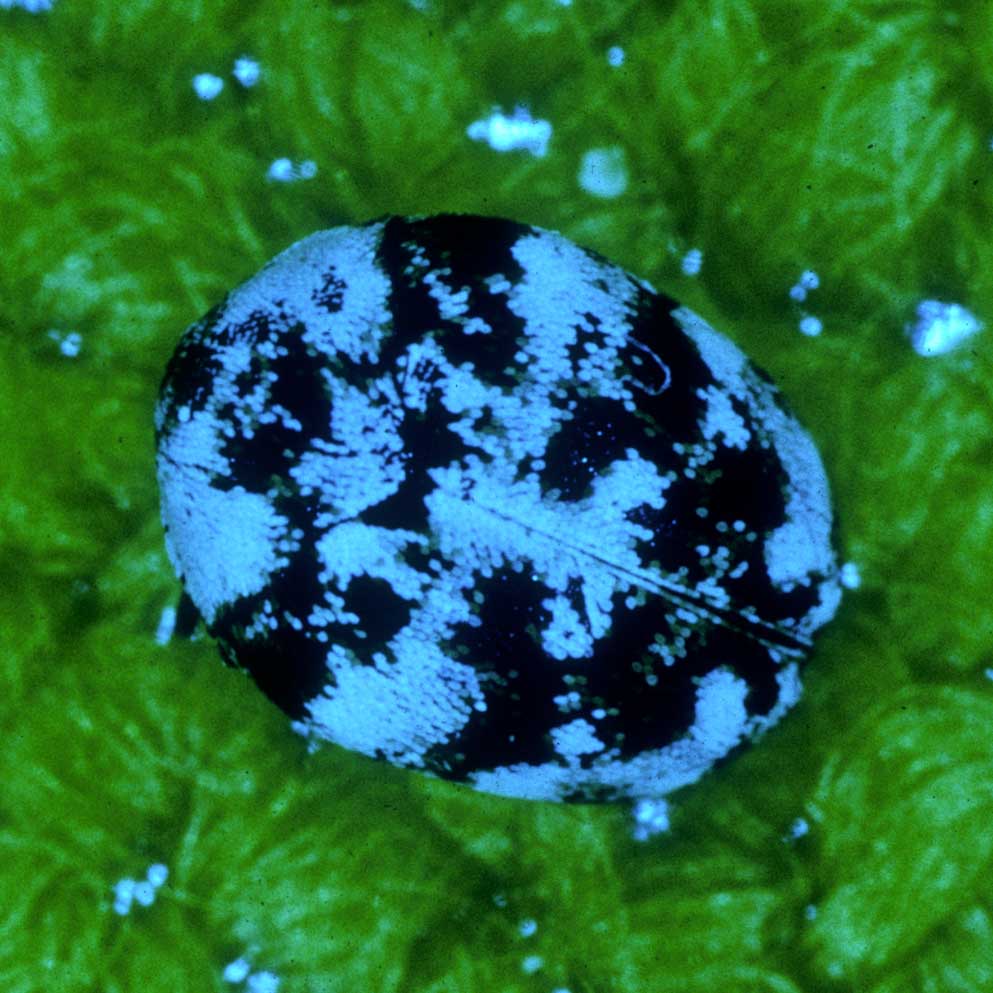 Anthrenus verbasci, also known as varied carpet beetles, attain a size of around 3mm in length. It belongs to the Dermestidae family, and its larval form is commonly found in houses and other areas. Though the larval form is not known to cause any harm, this species is considered as a harmful pest in the museums of natural history, as it has the ability to cause damage to the biological specimens. The larvae mainly eat natural fibers, and hence can cause damage to furniture, carpets, insect collections and clothing, whereas the adult form is known for feeding on pollen grazers.

The adult carpet beetles are seen in varied sizes that range between 1.7 and 3.5 mm. It has almost a spherical or rounded body shape with antennae that has 11 segments. Pronotum and elytra have a peculiar and irregular design of brown, white and yellow patches, which are formed due to the different colors of the scales. White scales form a three wavy transversal bright band on the elytra”s and the pronotum”s lateral margin. Anthrenus Scrophulariae that are locally referred to as the common carpet beetle is a blackish colored small beetle that can be seen in all parts of the world. This beetle mainly infests the products made from the animal waste like wool, carpets, textiles and other specimens of the museum.
The adult form of carpet beetle is an oval shaped insect that grows between 2.5 and 3.8mm long. It has a black head that is covered by prothorax. The elytra and thorax have a black shade with peculiar scale designs. The thorax has white scales all over it, other than the big mid-line. A unique pattern of red or orange scales are seen near the mid-line, along with several patches of scales in white shade. As they get older, most of the scales may fall, and the pattern of the color and design may look distinct. Larvae of the Black Carpet Beetle – Photo by: CSIRO

Attagenus unicolor attains four different stages of life by experiencing complete metamorphosis process. These four stages are namely, egg of the black carpet beetle, larval form, pupae and an adult beetle. In each stage, this beetle looks distinct, and requires different periods of time to transform from one stage to another. The Furniture carpet beetle, biologically termed Anthrenus Flavipes, is considered as a common but harmful pest that damages upholstered furniture. Similar to the other carpet beetle species, it has the ability to consume keratin, the vital protein content in an animal, feather and hair. The Furniture, Carpet Beetle also goes through the metamorphosis process to transform into four different stages of life, namely, the egg laid by the female beetle, the larval form, the pupa and then the adult beetle.

Adult carpet beetles are 3 to 5 mm long. These beetles are one of the most common insects which are found in Colorado homes. Eggs of the beetles are white in color and are ¼ to ½ mm long. These eggs have Spinelike projections, which are visible at one end. And they are well-known for their oval shape. These eggs are very tiny and hard to see. Adult beetles are shiny black colored with brown legs and the body is elongate, carrot-shaped and narrow. At the end of the abdomen they have a long brush of bristles and short golden hairs on the body. Adult beetles have 2 sets of wings. These beetles cannot see very well, so they communicate by using sounds, Pheromones and vibrations. These beetles can adapt to every environment. They like to live where they have food to eat. Many species of animals eat carpet beetle larva outside and the many species of ants also eat these beetles. They are well known for the irritating nature of their hairs. These beetles are attracted by odors and scents. Carpet beetles chew through fibers and leave the upper fibers to come loose.

Carpet beetles undergo complete metamorphosis. In length, the life cycle of these beetles ranges from two months to many years. The life cycle of these beetles starts when the adult female beetles lays their eggs. They can lay their eggs indoors and also infest the mice, nest of birds and other insects also. At a time, female beetle can lay 100 eggs. Within 7 to 35 days, the eggs will hatch into the larva. The larval stage is the destructive stage of these beetles. Adult carpet beetles are fliers, so they can move from one place to another. Larva can survive without food for many weeks. Larva can take over a year to develop into adults. The duration of the pupal stage varies. And in the spring or summer season, Adult beetles emerge. Within 9 months to 2 years, young beetles develop into the adults. Climate and food also affect the development of the beetle.

Carpet beetles, mostly feed on animal based products such as wool, silk, fur, leather and hairs of animals. As a result, these beetles infest the carpets, comforters, coat, furniture, pillows, blankets and clothing. They also attack on synthetic fabrics, and they can also feed on them when these fabrics are grubby with oil, perspiration and food. Adult carpet beetles eat nectar and pollen of plants. And the larva can feed on seed, animal food and other kitchen products. Both larvae and adult beetles like to eat in dark areas. Pet hairs are the most common food source of these beetles.

Carpet beetles lay eggs once in a year. These beetles reproduce quickly in heated buildings. During the summer and spring season, these beetles mate outdoors. The female lay their eggs in dark places. The eggs are laid in a down, under baseboards, in floor cracks or in dark protected places. Undistributed areas of warehouse, museums and homes are favorite locations to these beetles. Once the eggs hatch, the insects spend most of their time in the larval stage. The carpet beetle larva remains in shelter, feeding for six months to a year on surrounding materials.

Carpet beetles are important pest in rugs and wool carpets. They feed on plant materials such as grains, books, pet food and spices. As a pest, they damage the household articles and feed in them. They are also considered as museum pests because they are troublesome to the museum. These beetles can cause irreparable damage to the carpets and other products. Their infestations are recognized by their presence, because they gather around lights and windows.