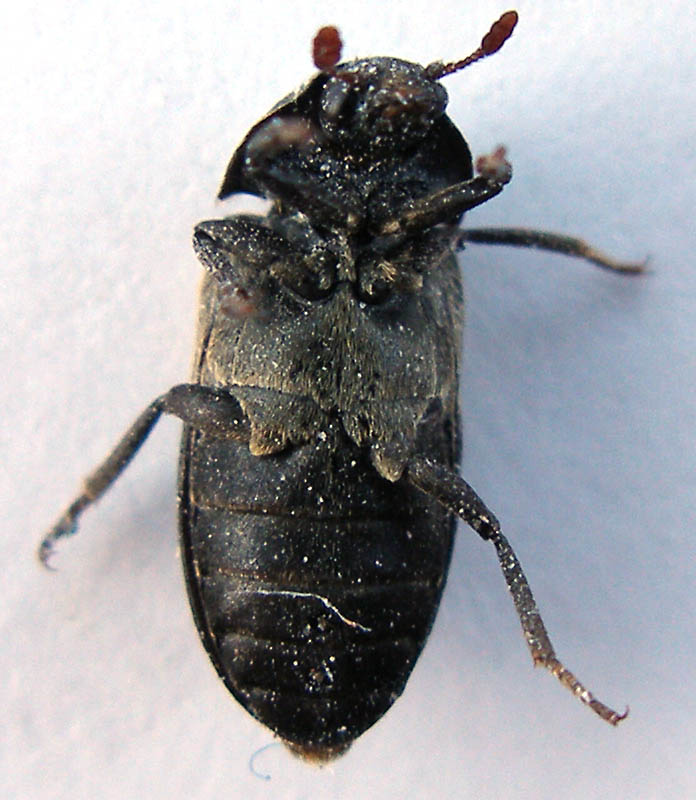 Dermestes lardarius, generally called larder beetle is a variety of beetles seen in the Patearctic, which includes Europe and also the Near East. In Europe, they are familiar in places like Australia, Albania, Bosnia, Belgium and also in Bulgaria, Herzegovina, the Czech Republic, Croatia, Estonia, mainland Denmark, Finland, the Faroe Island, Iceland, Germany, Latvia, Kaliningrad, Lithuania, Liechtenstein, mainland Norway, Luxembourg, Russia, Poland, Slovakia, Sardinia, Sweden, Slovenia, Ukrania, the Netherland and Yugoslavia. Other than in the polar regions, the Dermestes Lardarius Is a normal pest all over the world in homes. Taxidermists use them for skeleton cleansing, However, in general, they are used as fodder in Hexapoda hobby. It is understood that these beetles consume Keratin, a hard material seen in nails and bones of animals. Since these larder beetles are closely related to the carpet beetle, they are the usual pantry pests found in homes seen in the USA Anatomy and Canada.

The color of the matured larder beetle is deep brown, of size almost 1/3 inch long. The bottom half of the wing covers are thickly enveloped with crude faded yellow hairs. Normally in the yellow band there are 6 dark spots. There are thin yellow hairs that cover below the body and underneath the legs.

The color of the larva is pale brown and the larvae are nearly 1.2 inches long. It is distinguished by its 2 curved spines on the ending segment of the body. The larva is also thickly covered with hairs like its adults.

The fully developed female larder beetle searches for plenty of food stuff over which it lays its eggs. Under normal conditions, these eggs hatch within 2 days. The larva gets its food in its vicinity, because the female lays its eggs where plenty of food is available. The larvae eat profusely, until they are prepared to populate and grow into an adult. They are gluttons; they are able to chew most of the items. Based on the quality of the food, humidity and temperature, the feeding prolongs from 1 to 8 months.

When the larva if well fed, it vacates the source of food in search for a safe place to pupate, perhaps where there is a crevice or a crack, either on a tree or back of some sliding place. The larva beetle causes heavy damage to structural members or homes while in search of a safe place for harborage. It takes 1 to 2 weeks for the pupa to grow into an adult beetle. In case the climate is cold or certain other reasons, may lead to a delay in this process. After successfully emerging into an adult, it avoids light.

In case the larder beetle failed to invade a house, they while away their time during the winter by hiding beneath a piece of bark, until the temperature turns milder, then they mate and the female visits the flowers to have a feed of the pollen, rich in proteins. In the beginning of summer, the larder beetle starts invading houses. The female larder beetle lays eggs on the meat or on the source of their food. In case they fail to find something, they lay the eggs on pantry or in places adjacent to the larder where there are cracks. Our food is infested with this particular hairy brownish larvae. Further, they bury themselves within it or vacate from the food source in search of a place where there is a chance of better protection, while metamorphism takes place. At the time when they are there, they transform into stationary nymphs and further into winged adults.

The diet of the Dermestes beetles comprises of a large variety of products based on animal proteins, they are dangerous pests in museums and where silk worm is produced. Their normal diet consists of hides, leather goods, dried fish, skins, bacon, pet food and feathers. Hence household infection is at times characteristic of the presence of rodent or bird carcasses, accumulation of dead insects or old nests of bees. There are chances of Demestes feeding on a plant product with a protein content; however, this food is not of their choice. According to Hinton, of 1945, the presence of larder beetles in warehouses and granaries, in which dried fruits, cacao, etc., are stored, the beetles are perhaps excavating and eating the bodies of many insects. The fully developed Dermestes larvae, too, bores inside the hard materials like tobacco, wood, plaster, cork, etc., in order to pupate. Occasionally the hide beetles are made use of in museums for cleaning the skulls and bones.

Spring and summer is the time when the female larder beetle lays eggs. The larvae from the hatched eggs, dig holes into the food products. Within two or three months the larva develops into the pupa and further into the adult stage. On changing into an adult, the larva discards the burrow and food, and constructs a tiny chamber, enters it, and seals it from within in preparation for transformation into an adult.

It is possible for us to face a large population of these larder beetles, particularly in places where there is no hygiene at all. Highly contaminated poultry manure when thrown onto fields leads to the infection of the adjacent properties. Perhaps the hairs extricated from the lava causes irritation to the skin or leads to conjunctivitis to those who are exposed to the insects. Even though the part played by this larder beetle in spreading diseases is very minor, they behave as a mechanical vector, A vector that simply conveys pathogens to a susceptible individual and is not essential to the development of the organism) to anthrax. The content of proteins in the diet needed for the labeetles consume the carcasses, feathers, droppings, split food and other insects. The preference for food varies according to their species. Hide Beetles prefer are skin and hides, whereas the Larder Beetles show a preference for cheese, meat and the like. When the larva reveals chambers by digging to pupate, they cause immense damage. They normally keep a distance from the foodstuff where they are created, so as to keep it away from other larvae which eat it when they are dormant. This migration enhances cross-contamination between packaging, goods, etc. The products that are prone to damage are plywood, soft sapwood, polystyrene insulation, cork and fiber glass wadding. These infestations are noticed as round holes of nearly 4mm in diameter, the burrows of which are likely to stretch up to 300mm. Highly infected products end up in the weakening of the wooden pillar structures, catwalks, etc. The other damages done are in plastic water pipes and electric cables that are enclosed in plastic. . They even excavate tin, lead and plaster, however, not aluminum and zinc.