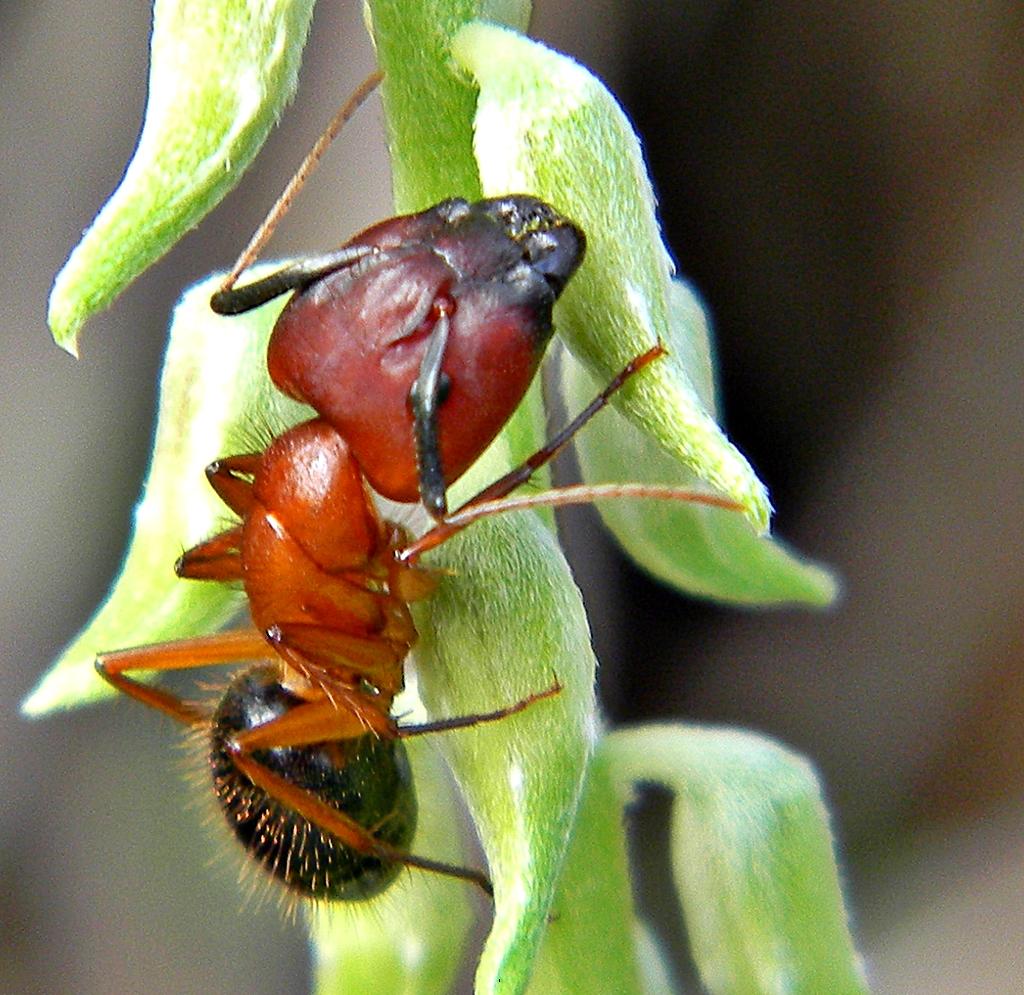 The ants that rely on dead insects for food, live in a moist places in their nests and do not eat wood,  are called as carpenter ants. Unlike termites, carpenter ants use wood to build their nests. Carpenter ants (Camponotus Spp) are aboriginals of the forested areas across the world. They are quite large (0.3 to 1.0 inches or 0.76 to 2.4 cm).  In the  United States, the black colored carpenter ants (Camponotus Pennylvanicus),  infest the houses as well as wooden buildings and structures. They cause huge destruction of the infrastructure and create inconvenience everywhere. Many genres belong to the genus Camponotus. Anatomy

In the United States, the carpenter ants are found in black color and are  quite a familiar species. They are categorized as the largest ants measuring  3.4 to 13mm long.

The termites and the carpenter ants are completely different. The latter has dull colored bodies, defined waists, and bowed (bent) antennae. Certainly the hind wings are shorter than the front wing, if they are present.

As the carpenter ants are quite delicate for a humid environment, they create house eggs with 12-15% humidity. The initial nests made by them are called primary nests and the one they  after the construction of these nests, are called satellite nest. They are created only when they are completely  endowed and are cultured properly. The primary nests include eggs, the distinct hatched eggs, workers and queens whereas the satellite nests consist of older larvae, pupae, and some winged individuals. The places that are dry are mostly used by these ants to make their nests. As the areas chosen have less humidity, the eggs are safe. You can normally expect to see carpenter ants,  where there is moisture. Areas like decks, porches, windows, parts of the house above and below them are infested by them. The carpenter ants are present outside and inside too,  mostly found in carved out wood and corroded spaces. For their activities  and for moving from section to section inside as pathways,   they create galleries in the wood.

These carpenter ants keep their nests and pathways smooth and shiny. They dust the nests systematically, and do not allow the  galleries to be damp and muddy like that of the termites.

The carpenter ants trace out honeydew as a source of nutritious food from the aphid colonies in the course of their prolific underground tunneling, extract and feed on it.   They also do the tunneling in trees and build a parent colony and further build satellite colonies around it.

These ants rely on the carcass of the insects,  substances accruing from other insects, some plant secretions and honeydew derived from the aphids. These carpenter ants are known to enhance the survival of the aphids  when they associate with them. They may approach a particular aphid species or any of them. The attack by these carpenter ants on the insects happens mostly at night. They attack, gather and ingest dead insects. They hardly gather live insects. When they notice a dead body of an insect, the fluids in its carcass are taken to the nest.  At times, they also collect for their nests, the inner tissues of the carcass of these ants. They leave behind most of the rest of the shell. These ants foray individually,  in minority groups or major groups. A number of times they do it on their own. Some areas may overlap the territories of adjacent colonies, but they never help each other in their search for food. Their food comprises of proteins and carbohydrates.

There is a method of taking the food. Information on food availability, its location and the shortest way to the food from the nest are communicated to the nest by these ants by a process of biochemical pheromones.  As a large number of worker ants follow, this trail takes on the connotation (meaning) of a foraging trail. The whole process ends when the food is finished. These trails may be over the ground or underground.

If other insects show interest in the food, the carpenter ants then establish mechanisms to increase their attack on that food. These carpenter ants are not threatening, but they have established methods to increase their draw from a food source, especially when they have competitors for it, considering an approach in groups for better effect, They also sometimes decide to form a colony near the food source and make regular forages to discourage other intruders. Most other ants are not organized like the carpenter ants.  These ants mostly visit areas having a resource dense food so as to minimize the availability for other foragers. They have a  proper planning on foraging for food that accounts for accidental competitors.

Carpenter ants do not rely on woods for their food. They just use it to make their nests by constructing tunnels. The carpenter ants cannot consume cellulose. Unlike termites, wood is not  their food, but they remove the waste and  create diminutive piles away from their nests.

The eggs that are laid by the queen ants may survive up to 25 years. They lay a clutch of around 9 to 16 eggs. It takes 6 to 12 weeks for these eggs to finish their life cycle.

How to Get Rid of Carpenter Ants

The carpenter ants are mostly red or black colored bodies which  can extend up to  ¾ inch to ½ inch. They are dark in color. They have a combination of wings and bent antennas.

Here is some trusted advice on how to kill carpenter ants

Boric acid- To get rid of the carpenter ants you will need a combination of boric acid, I tsp of sugar, peanut butter or honey and 4 ounces of water. A mixture of this should be placed where the ants come often. The sweetness of this mixture will bring them closer to it, but it is definitely harmful to them.

Vinegar- Mix  vinegar and water 50/50 and I tbsp of eucalyptus or peppermint oil (mixture of cinnamon, garlic powder or pepper also can be used). This mixture is a good repellent and you can use it also to kill these ants. You can also spray this mixture on the paths created by them. This solution is quite acidic to the ants. They always make efforts to avoid  it.