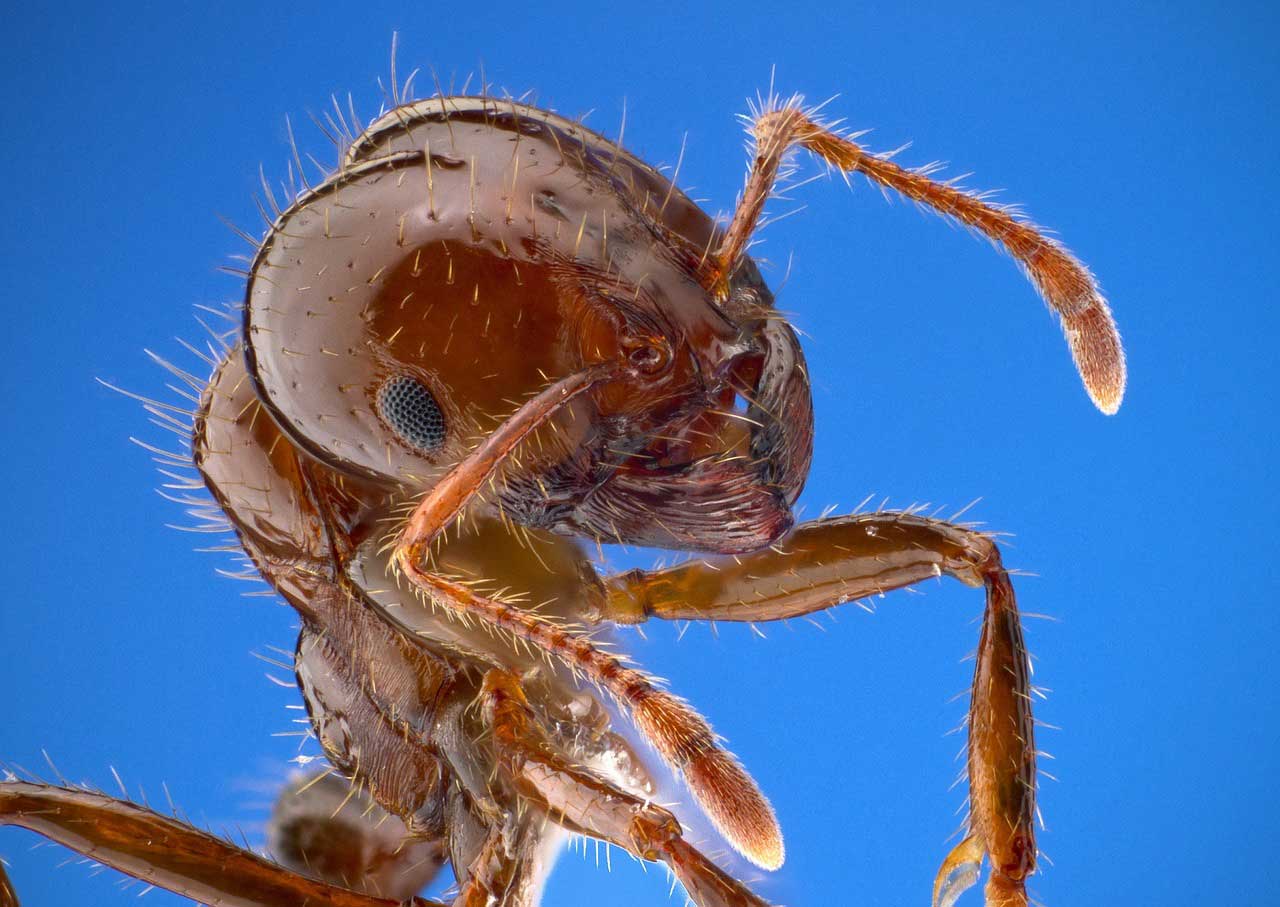 Have you ever seen or being stung by any solenopsis? Wait before you say no, because you may better know their common name, the “fire ants”! Well, you are not mistaken if you have heard “ginger ants” as another name for it. Solenopsis is a genus which includes a wide variety of stinging ants that inject their enemies with a chemical called piperidine. There are about 200 species of solenopsis worldwide. Most of them are distinguished with a light brown color, hence the name “red ants”.

Usually red ants refer to the red imported fire ants called solenopsis Invicta which came from Argentina to US through the Mobile Port in Alabama. They are well known for their defending character. If anyone wants to invade their nests, they better be ready to get stung and of corse,  to get hurt!

Fire ants use their mandibles to insert their sting and inject venom into the enemies’ body, but it  is not found to have a lasting effect. This sting can cause a raised white pustule that can manifest for several days. Fire ants also have the unique ability to repeatedly sting without getting barbed unlike honeybees. Anatomy

Anatomy of fire ants is not different from other mature insects. They are featured with three sections,  namely the head, the thorax and the abdomen with three pairs of legs and a pair of antennae. The difference in these parts categorizes them into different species. For example, fire ants of US can be distinguished from others by their copper brown head and body with a darker abdomen. And yet another type of fire ants called solenopsis Spp,  have a different set of special body features,  mainly,  a two nodes pedicel, an exposed propodeum and a 10 segmented antennae along with a 2 segmented club. We also said it is clear that fire ants are more aggressive than most other native species. This has kept many of their enemies away from their local habitat,  which is typically large mounds built in open areas. They are also good hunters and many kinds of small species fall into their food menu like young plants, seeds, crickets and some other small animals.

Fire ants are also different in their method of hunting and killing. Many of their counter parts usually bite before spraying the wound with acid.. But the fire ants  first bite  to grip. They then inject solenopsin, a special alkaloid venom by stinging. This creates a very painful sensation similar to that when burned by fire and this can be even deadly to sensitive people.

Fire ants also have the special ability to survive extreme weather conditions. They do not even hibernate,  but still can survive very low temperature as low as -9ºC.

Habitats of fire ants also exhibit variety and uniqueness according to the environment in which they are. Usually fire ants nest in cool soil near to moist areas like river banks, ponds, shores, watered lawns and highway shoulders (emergency stopping lanes on highways). These nests are not usually visible as they will be concealed by timber, logs, rocks or bricks. But you can see dome shaped mounds of about 40cm height and 1.5m deep without cover in open areas like parks, fields, lawns etc.

In the case of fire ants seen in southern US and other areas that do not freeze in winter, they build dirt nests in the form of mounds in open areas.

Whatever be the form of their nests, they live as colonies in small groups of queens or a single queen as the head. This ensures the ever expanding nature of the colony as any one queen will always be alive. Only one queen is enough for the colony to expand to thousands of ants. Some colonies are seen with multiple queens per nest, which are known as polygynous colonies.

The approximately 200 species under Solenopsis genus can be grouped as mainly four native species that are:

Apart from these native species there is another exotic group called the imported black fire ants,  which are known to have arrived in the US by 1918. Unlike common fire ants,  these are less aggressive. These are still seen in some parts of Texas, Alabama and Mississippi even though in limited number. Like other  ants, their colony also has mainly three categories of ants,  namely the queens, the soldiers and the workers. Queens are the largest in any colony, reproduction being their only function. Thus queens serve as the reproduction units and they can live as many as 6-7 years and can produce about 3,500 eggs per day which is really a great number! This means a queen produces about 9 million eggs in her lifetime!!

As for the soldier ants, they are the strongest and most powerful ants with strong mandibles. The worker ants are always at work as they are in charge of regular tasks like caring for the eggs, larvae, pupae, cleaning the nest, foraging for food etc.

We already know how much a fire ant bite can hurt anyone. So if anyone is really unlucky to get stung by a fire ant, following tips can turn really useful.
Some of the home remedies against fire ant bites are: A main point to be noted is that,  whatever remedy you take,  make sure the person is not allergic to that particular material. And if the sting is yet uncontrollable, the victim should be immediately shifted to hospital.