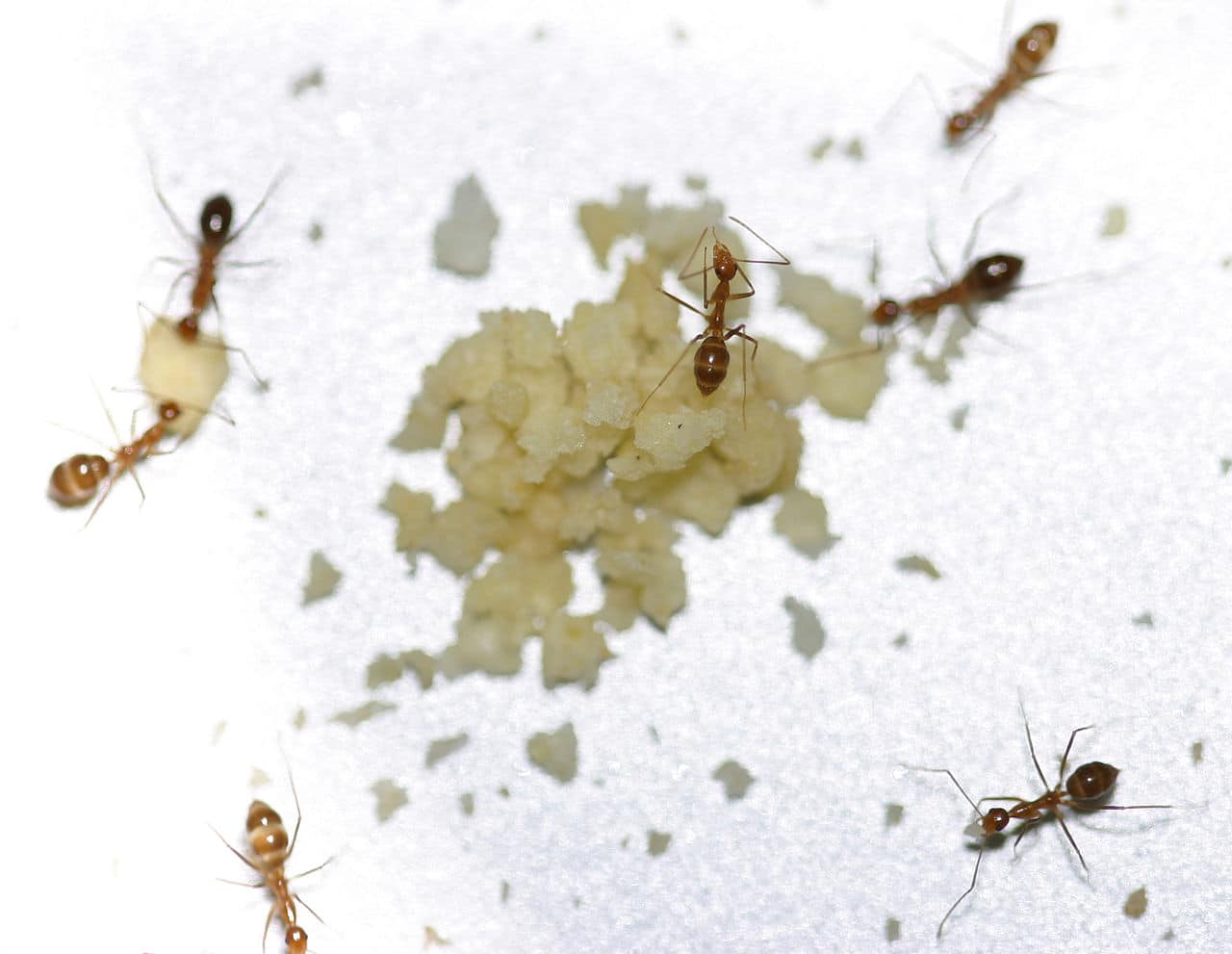 The Rasberry crazy ant which is also called Nylanderia Fulvais or tawny crazy ant, has origins in  South America. These ants have quick and erratic movements similar to the longhorn crazy ant,  also called as Paratrechina Longicornis. Their movements, and especially the change of direction, while disturbed,  are characteristic features  of these crazy ants.  Therefore Rasberry crazy ant species are also known as “Crazy ants”. In 2002, Texas’s scientist Tom Rasberry noticed that these ants were multiplying in number. The scientist found it hard to recognize the species of these ants on the basis of taxonomy of class. But Later he recognized them Nylanderia Fulva, and since then this ant genus got its name labeled after the scientist’s name as “Rasberry crazy ant”

In the year 2014, it was found that this ant species produce and wraps itself in formic acid. This formic acid works as an antidote agent against the fire ant’s toxin. This has been seen for the first time where one insect species neutralize the poison of other ant species. Their colonies have many queens. Queens contribute both to the survival of the worker ant their extermination.

These ants are hard to control. They are not killed by any ordinary pesticides or bait. Their Colonies consist of multiple ant queens, which makes complete extermination of Crazy ants hard to achieve as compared to other species.

Crazy ants are pan tropical tramp quickly disperse their activities. This ant species count as one among the common house ant pests and they apparently adapt inside the interior of cavities in  home and buildings.

Some authorities use the term “longhorned crazy ant” for Paratrechina longicornis  to avoid confusion with similar ant species that  are also known as “crazy ants.” Some others also use the name  “black crazy ant.”

This ant species are highly morphologically distinctive. This is among few Paratrechina, which are not constantly misidentified. The worker ant of this species are 2.3 – 3 mm, which is comparatively small. The color of petiole, head, Gaster and thorax may vary from black to brown. The body has a light bluish iridescence over it. Their body is erect, long, well scattered, and has Setae which can vary from whitish to a grayish color, long and coarse,

Crazy ants have a long 12 segment  club less antennae. The basal or  scape segment is very long and its apex surpasses the posterior border of the head by 150% of its scape length The shape of the eyes is elliptic, strongly  convex,  and located close to the head’s posterior border

Worker ant of this species is monomorphic. They have a single node between the gaster and the propodeum. Legs are extremely long, while the petiole has a broad base. The petiole has a wedge Shape, bent forward. You can find a minor body orifice or acedipore, covered with hairs. The purpose of acedipore is to apply venom during predation and in defense. They do not have stings. But when they bite, they bend their abdomen forward and inject its venom inside the intruder’s body.

These ants are very much adaptive. They can live in any habitat either dry or moist. However, they cannot adapt to intensely chilly climates, due to which  they crawl either into cracks in the building or houses for their nest. They usually establish their nests inside the plants and trees, pockets, rotten wood, beneath rocks or trash, soil or inside the buildings. Nests of these ants can be easily located by chasing the worker  ants. The size of crazy ant colonies is small and they consist of approximately 1,500 to 2,500 ants.

This species of crazy ants are a domestic pest. They have a strong ability to survive with extreme and strange habitats  including shipping. Since they are compatible with human beings, their range of existence has no limits. They have been seen from north to south, some of the areas are in Sweden, New Zealand, Estonia and many more.

Crazy ants are not limited to the US. You can find them in every part of the world. They are most common within tropical cities of the world. It was believed that they had either African or Asian origin, Melanesia or Southeast Asia to be more precise.

This species of ant are extremely versatile and usually build their nest a little away from their foraging area. They establish their nests in the vicinity of trees and plants, inside the rotten wood, under rock and trash, in the soil and in the debris and residue of building standing for a long time.

All Worker ants of Crazy ant genus are omnivorous. They eat dead and live insects, kitchen food material, fruits, honeydew from insects and seeds. These ants expand vigorously around the places like convenience stores, sidewalk cafes, and gasoline stations. These ants change their diet preferences with the seasons. During winter they rely on a rich  protein rich diet,  while in winter they avoid sugar and honey. During spring season they eat honeydew. They get honey drew from aphids, To carry a large prey, these ants create a very concerted group. Each colony of crazy ants  generally consists of 8-40 queens. Budding occurs when a few workers and a fertile queen break up from their major colony and build  their own new individual colony. The process of separation  from the main colony and creating new colony is called budding.

When you see these ants rambling back and forth from their established  nest outside  or when you see them  indoors, foraging  for water and food, are clear symptoms of ant infestation. In the wild, research has identified infestations ranging even up to a square mile.

Pest control of crazy ants starts with a detailed inspection. Prevention or proactive measures include exclusion and sanitation that prevent crazy ants entering your house,  and removal of  their food origin. For effective advice related to controlling and preventing crazy ants,  contact a professional pest management team. These are professional with  special skills, who know their job. They can provide you the right solution for managing both outdoor and indoor pests. You can take protective measures from your side by eliminating condition and sites that offer cover for the ants to nest.