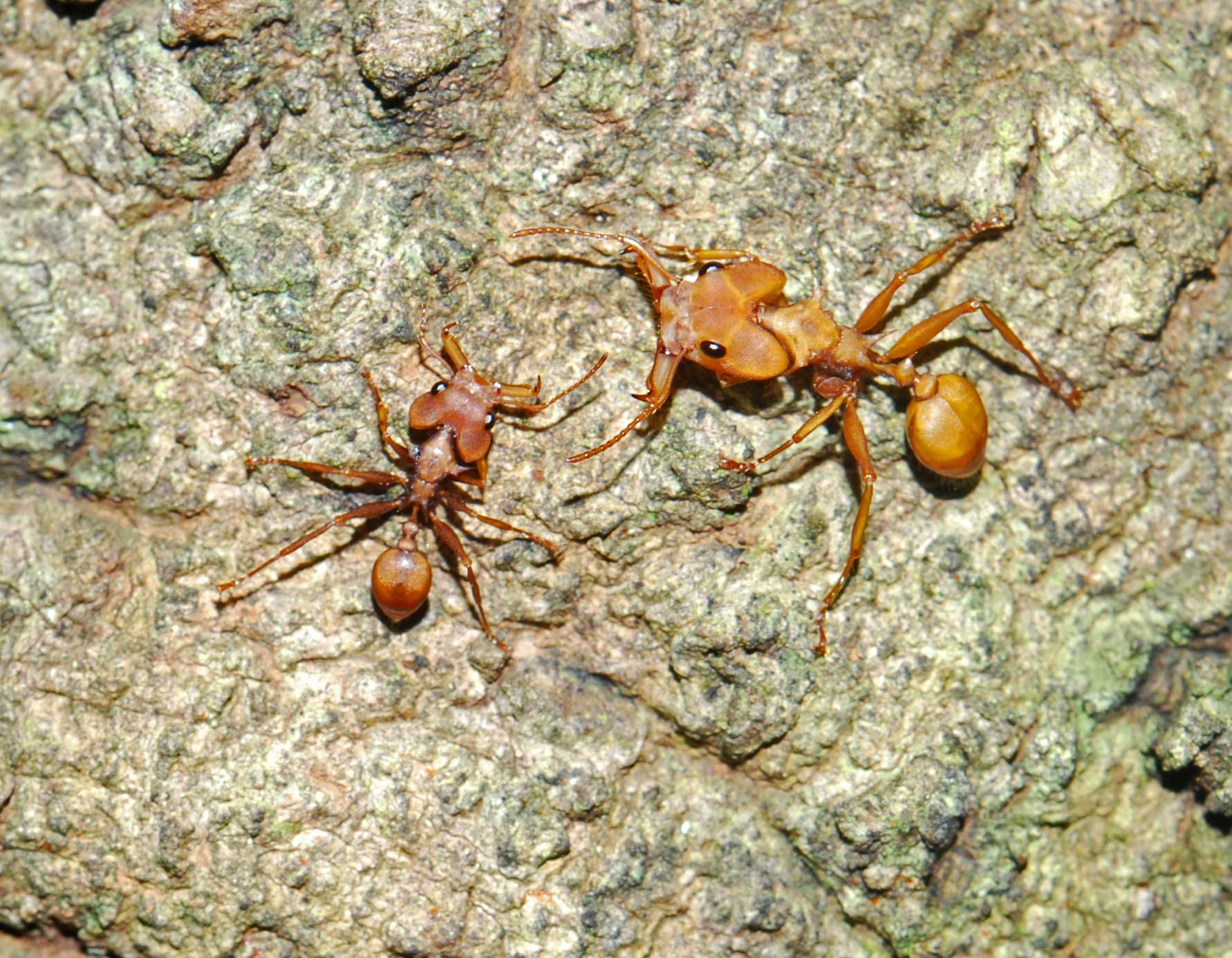 Odontomachus, otherwise known as trap-jaw ants, belong to the carnivorous variety of ants, and you find them  in the subtropical and tropical regions all over the world. The general name for this variety of ants is trap-jaw ants in Odontomachus species. They have a pair of big and straight mandibles that can open as wide as 180 degrees. There is an internal mechanism that locks the jaws in position. When the sensory hairs located on the interior of the mandible are touched, they sense the prey or object and abruptly shut on them. The ant got its name from these strong and fast mandibles. The prey is either maimed or killed by the mandibles, permitting the ants to take it back to their nest. It is possible for the Odontomachus to once again snap and lock its jaw in case a single bite is insufficient,  or for cutting  bigger size prey into bits. Besides, they are able to perform slow and smooth movements of their mandibles for building nests and nurturing the larvae.

These varieties of Trap-jaw ants are vigorous hunters and their stings are poisonous. Their jaws are strong enough to launch  them in the air. Research conducted recently indicates  that they are moving into new territory in the southeastern United States. Habitat and Distribution of Odontomachus in General

This variety of Odontomachus is seen in South to Central America, tropical regions of Asia, Africa and Australia. When we go back to 1956, there are records of Odontomachus Haematodus reported  in Alabama. Of late, it is confirmed officially by researchers’ that this variety has moved across the coast of the Gulf, up to Pensacola in Florida. Earlier it was assumed  that “Odontomachus Ruginodus” was established in the Orlando region, but you now see it in over a hundred miles to the north of Orlando, in Florida, and Gainesville. Despite this, Odontomachus is seen only in the shrub habitats of Central Florida’s very old sand ridges that are on the verge of extinction.

The whereabouts of one among the famous Trap-Jaw Ants belonging to the Odontomachus group is given below: Odontomachus Bauri is a variety of Ponerinae Ants called Trap-Jaw ants. The trap-jaw has mandibles with a spring-loaded catch mechanism.

This mechanism enables the ant to store energy prior to releasing or striking its mandibles swiftly. O. Bauri is famous for its strong mandibles that  open to an angle of 180 degrees, and that too in 10 ms of stimulation, closing  in a short interval of 0.5 ms, facilitating them to trap their prey. With these mandibles, it is possible for the ant to either squeeze the prey to death or paralyze them.

The mandibles of the O. Bauri provide the ant with an amazing additional advantage in addition to its already existing gross killing power. The mandibles develop sufficient force to help these ants to cover commendable distances.

These ants are capable of launching themselves horizontally to a distance of almost 16 inches(a distance of nearly 20 times its body length), achieving unimaginable heights of  upto nearly 4 inches. In actual terms, when you compare in human terms, it is the equivalent of a man of five and a half feet jumping a distance of nearly 135 feet in the air at a height of about 45 feet.  This facility stands them in good stead especially when they want to escape from predators, when they just strike their mandibles on the ground, and off they catapult into the air. Howecer, an interesting factor is its inability to control its trajectory.

O. Bauri  and Anochetus are of the same genus belonging to a single family called Formicidae. You can see them in the  southern regions of Costa Rica,  all over the tropical regions of the continent of South America, the Galapagos Islands and West Indies (other than Bahamas and Cuba).

The main characteristic of the O. Bauri is its deep brown color. In addition, it is striated at the face close to the margin of the Vertex. The length of its head is 2.09 to 3.12 mm (0.082 to 0.123 in). On its primary   Gastral Tergum, you will find partially erect  and comparatively symmetrical hairs. In the side view, the petiole node is dome-shaped.

The O. Bauri particularly build their nests  in humid and soft grounds where they are shielded from the direct effect of sunlight,  and also in locations that natural phenomena like the wind and the rain do not affect. You  can find their nests below trunks of fallen trees, branches and rocks, in residues of vegetation and containers of plants.

The structure of O. Bauri’s nest is polydomous,  comprising of many nests in a solitary colony. This phenomenon was ascertained when it was observed by researchers that there was unity among several adjacent nests, but  the aggression was rife in those nests that were at a distance of over 10 m (33 ft) from each other. In addition, it was noticed that most of the time, Trap-Jaw Ants shared food with neighboring nests.

The nests of the O. Bauri are generally small, approximately accommodating 200 ants. The areas for foraging are specific between every nest family. It is understood that O. Bauri  stick to their own areas  during foraging, to avoid the hassles of entering the foraging areas  of its neighbor. In the kingdom of animals, O. Bauri are the quickest in hanging on to, killing and feeding on other insects. When one among the four triggered hairs gets stimulated, the appendage will react to the situation in 10 ms, its speed being  126 to 230 km/h. (78 to 143mph) and its jaw opens and closes at a speed of 130 microseconds on  an average, that is 2300 times faster than an eye-blink? The greatest force that it applies to its jaws is about 300 times its body weight. It was also noticed that the ants used their jaws to either throw themselves backwards in order to escape or as a catapult to throw out intruders.

The biology attached to this astonishing capability is that on the stimulation of a single trigger hair, all the four motor neurons start functioning. These big motor neurons are totally concealed in a glial case, comprising of a gathering of peculiar cells, which gives nourishment and support to the neurons. A glial casing is of prime importance for delivering signals at a high speed, since it allows a smooth flow of signals, not necessitating the signals travelling from neuron to neuron.

The O.bauri’s mandibles are retained in its place by means of a latch, named clypeus. On release of the latch, the whole energy that is stored is instantaneously discharged closing the mandibles, quite similar to the crossbow after firing.

The trigger muscles that we see in the O.bauri  are even seen in the fastest of the  synchronous muscles in the cicades. It appears that the muscles are shaped  so as to contract fast. This accounts for the length of the sarcomere, which is the primary unit of the structure of the muscle.

The Trap Haw Ant prefers for its food, other insects like grasshoppers as well as human leftovers of sweet foods lying in the open. An  interesting fact about these ants is that, when it exercises its super fast mandibles to strike its prey, the jaw strikes the victim and cripples it, but the ant cannot fully control its roll and lands across and away from from the prey, necessitating it to return to finish its job.

The O. Bauri species of ants are a very aggressive lot. The moment as intruder invades their habitat, several workers execute the act of jumping to escape and  in case one of them happens to fall on the intruder, then the workers start to sting the intruder. However, unlike the variety of ants that belong to the Solenopsis where all the worker ants sting the intruder, here only some of the worker ants join the biting extravaganza. Their sting creates an allergy, but it is not very harmful to the human being.

O. Bauri uses  antennation to identify the other worker ants from various habitats. This takes place when a pair of ants face each other by the touch of their antennae on the other ant’s head or antennae.  They have four various manners in which they behave when encountered with another ant. They can resort to  assaulting by stinging, fundamentally become vigilant, get alarmed or attack using their mandibles.