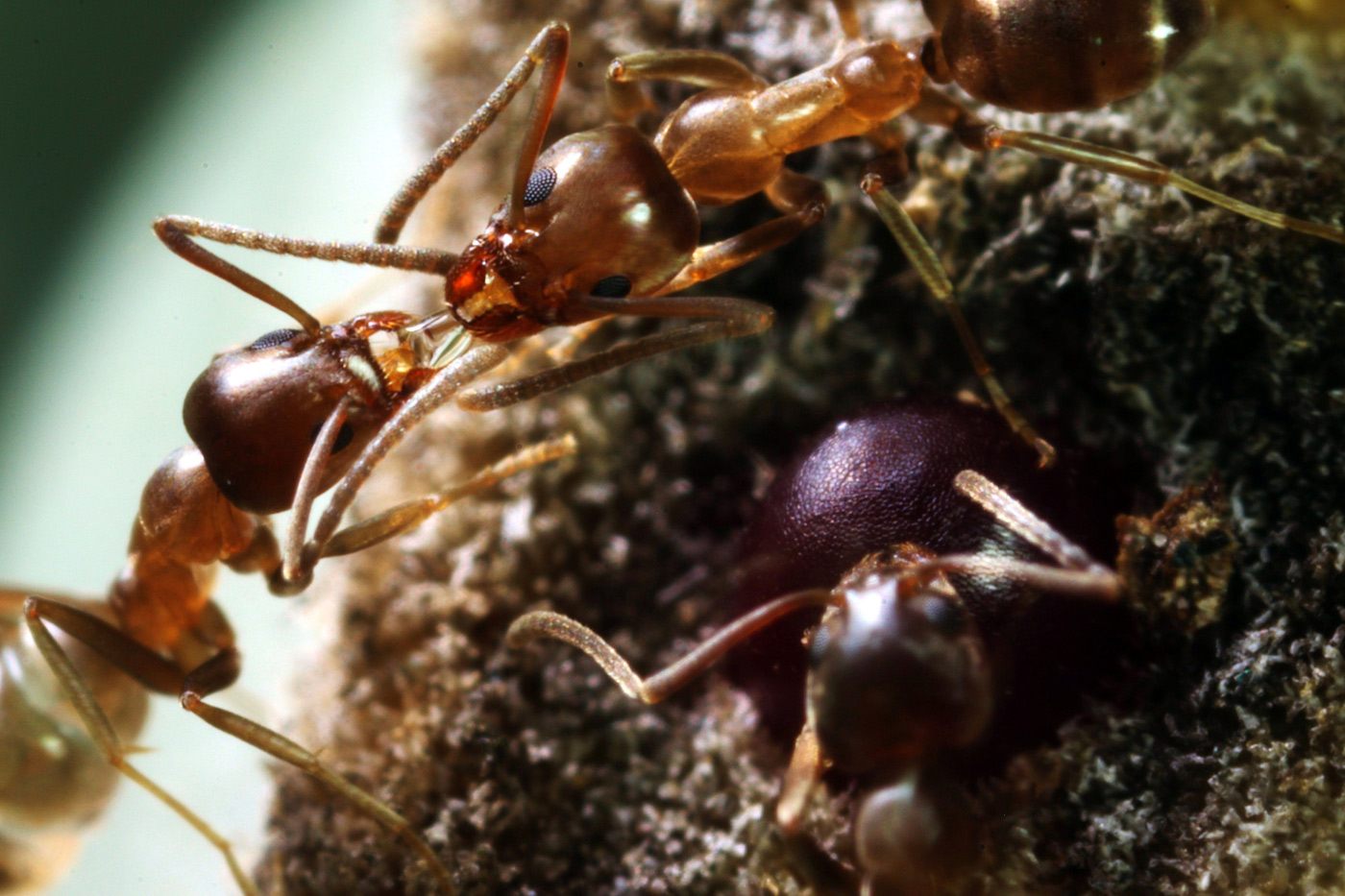 You find the Argentine ants, Linepithema Humile (formerly known as Iridomyrmex Humilis), living mainly in northern Argentina, Paraguay, Uruguay and southern Brazil. This invasive species was introduced to several Mediterranean countries by human beings.The same applied also to countries like New Zealand, South Africa, Easter Island, Hawaii, Japan, Europe and Australia, Argentine ants are not seen as a native species in the United States, and many believe that they came to the US on ships bringing coffee from from Argertina or Brazil through the New Orleans Port sometime before 1891.

Here, all the workers are female, about one sixteenth inch long and monomorphic (similar in size) The queens are longer by twice or more, and these Argentine Ants display a light / dark color. These ants have a petiole (the segment in between the abdomen and the thorax) and this is segmented, though, depending on the species, there can be one or two segments. When viewed from the side, the thorax may appear rough. These ants have no stingers, but are known to bite, if threatened.

The colonies of Argentine Ants are, normally, very large, each one housing several queens and thousands of workers, in the ratio of queens, 10% and worker ants, 90%. The queen’s only job is not only to continually lay 1000’s of eggs in a season, but also to rake care of the young, including feeding and grooming them. You can see that males are produced only when a colony attains maturity and they die shortly after mating. The reproductive winged male and female ants, unlike other ant species all over the world, do not fly out in swarms to mate, but stay and mate inside the colonies after attaining maturity in April/May. This process acts as a deterrent against the harsh winter as well as predators like lizards. Birds, frogs and larger insects. New colonies are formed by one or more mated females migrating from the parent colony with a group of workers. Queens are unable to raise a brood alone. In winter especially, several colonies may combine to form a larger colony in a favorite nesting site, then and divide again in spring or summer.

“Trailing” is a characteristic feature of the Argentine Ants who traverse in excess of 200 feet along with their group consisting of thousands of ants, to the food source from their nest. With a love for sweets, they usually hunt for insects that produce honeydew, but will change their diet patterns depending on the season, including a wide variety of sweets, dairy products, meat, wastes, fats, vegetable oils and the like. Many of the worker ants do not eat much, and tend to waste a lot of food. This waste must be cleared from the nests to keep up the hygiene and prevent germ infestation.

For outdoor habitats, the Argentine ant always prefers a moist environment that includes areas under debris, like mulch, slabs, slabs, rotten woods, refuse piles, bird nests, bee hives and the like, and also in nests formed over or under the soil. Sometimes they inhabit in areas under the houses and may come into the houses if their nests get disturbed.

Indoors, these ants will sneak into every available crevice, including refrigerators, stoves, clothing, beds, shelves and the like. Fond of moisture they may even enter the pipes, dishwashers and other moist places. Argentine ants have the reputation of being incorrigible house pests among the ant species. Argentine ant control therefore becomes a priority. Only a thorough and yearly control process can help you to achieve complete eradication. Please see below, some of the actions you can take to alleviate your suffering against their persistent invasion.

For treating Argentine Ants, baiting indoors is really the best method. Place the baits at the entry points of the ants, and ensure that the ants feed on the bait. Take care not to spray the areas where you have kept the bait, and leave it for some time until it takes the bait and carries it back to the colony and infects the other ants, including queens as well. You can easily buy the bait at grocery stores.

However, if the ant infestation is beyond your control, call in the pest control specialists who will do a good job of total eradication for you.