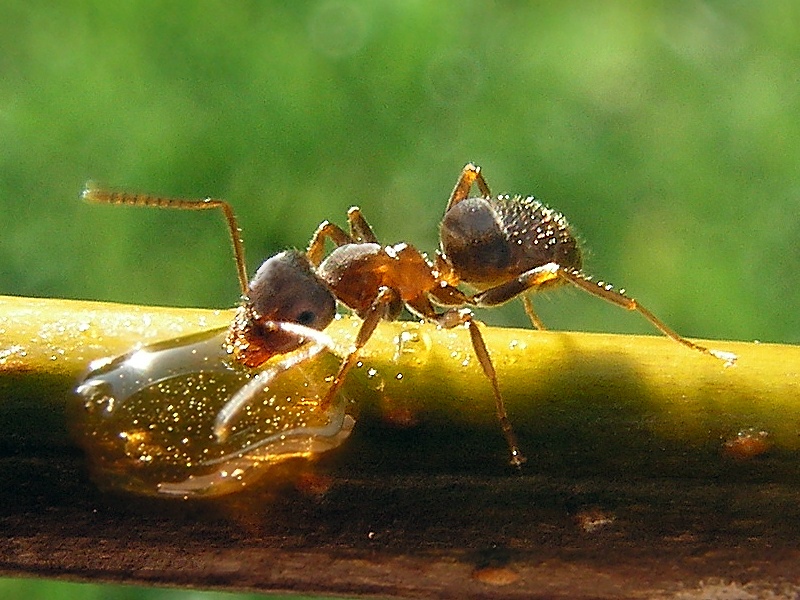 The black garden ant whose scientific name is Lasius Niger is otherwise called in general, as  black ant, this is a Formicine ant, belonging to the sub-genus Lasius. We find them throughout Europe and in certain parts of Asia and North America. The European variety was divided into two types; L. Platythorax dwells in the forest regions, whereas the L. Niger type dwells in exposed areas. This ant is monogamous which means they have only one queen in a colony. Anatomy

In spite of the fact that these garden  ants are named as black ants, it is also possible that they port a  dark brown color and most of them grow to a  length of 3 to 5 mm, Still,  the queen can attain a length of 16mm. This Garden ant is lively and it moves with speed. On seeing human beings, they try to escape. Once the queen discards its wings, it moves quickly on the lookout for a damp site. Further, it digs a tunnel. On completion of the tunnel, the queen, then seals the entrance and settles at the bottom. Later she digs out a tiny compartment. This becomes the beginning compartment for the fresh colony. Normally the queen starts laying eggs, following the completion of the chamber. The eggs hatch after a period of 8 to 10 weeks. The Lasius Niger queen abstains from food, till the eggs hatch and the larva reaches maturity. They depend on the proteins they get from the wing muscles that are powdered and digested. In certain cases, a Lasius Niger queen consumes her own eggs for survival.

As its name implies, black garden ants  love to live in the gardens: We often see them below the stones, payments and bricks. Besides; they construct nests in houses where the wood is rotten. It is learnt that the black garden ants build their nest in basement crevices and then  enter the houses. In a colony of a black garden ant,  you can find  approximately 5.000 ants, and sometimes, this figure can cross the  15,000 mark.

Black garden ants usually survey  their environment extensively  in the early months of summer, both for the purpose of accumulating the food for the queen and her juveniles and also for preparing for  the nest’s summer flight.

Black garden ants   like  sweetened foods like ripe fruits, In addition, they consume honeydew prepared by aphids. They also draw honeydew from consuming insects such as white flies, mealy bugs and plant hoppers.

For Black garden ants, Planthoppers, is the right  honeydew source. The Black garden ants conduct  vigorous explorations for any food products, particularly sweet or greasy products indoors. . In addition,  it consumes dead or live insects. This Black garden ant is not only a day and night forager,  but also a scavenger.

Mating of the ants takes place in flight. Hence “flying ants” are under- developed queens and males. Nuptial flight/mating of the Lasius Niger normally takes place during June to September for all species. In North America. Normally,  flights take place during the autumn season, But in Europe mating normally occurs in the summer,  when it is hot, during July and August.  On a flight thousands of winged females and males meet together.