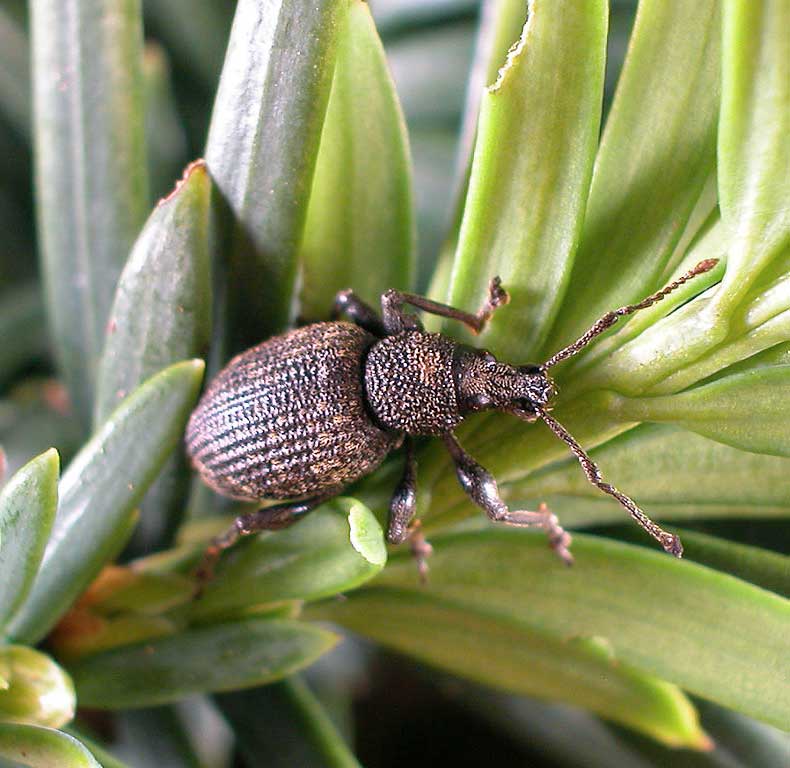 Otiorhynchus Sulcatus is the biological name of the commonly referred Black Vine Weevil. It is considered as a pest beetle, because it damages many garden plant species. Being a native of Europe, this beetle was first seen in 1910 in Connecticut. The larvae and the adult form both prefer Rhododendron, Japanese Holly and Euonymus. This beetle larva also eats the hemlock roots.

The adult form of vine weevil is large, and attains a size of ¾ of an inch. It has a slate-gray or black colored body without wings. They possess a broad but short snout, elbowed antennae and hair patches on the wings. It mainly eats at night, destroying plants by chewing the leaves that leaves it with small notches on the edges. In the day time, they mainly hide in the garden debris, soil cracks and mulch.
The larvae form is the most dangerous pest. It attains a length of half and inch, and has a C-shaped body of white shade with a brown head.

Adult weevil needs to feed on foliage for around 21 to 28days before producing eggs. Each weevil may lay more around 500 eggs in a stretch of 14 to 21 days. It lays eggs near the base part of the host plant, situated in the soil. The eggs take around 10 to 14 days to hatch, from which a small larvae form emerges. These larvae feed on the plant roots till the temperature of the climate decrease, after which, they prefer moving deep inside the soil. Generally, this weevil has only one generation, especially in Pennsylvania.

Mostly the Black vine weevils overwinter in the soil as larvae. Mature larvae that grow up to 10-15mm in length, transform into resting pupa in the soil itself during the beginning of the spring. The adult weevil emerges out of the pupa form at the end of the May or June. In North America, only female vine weevils are commonly found. In the daytime, these weevils prefer to hide from the predators.

The Otiorhynchus Sulcatus species or the black vine weevil is found in a large population near the areas of the Northern United States. It is also spread throughout the Ohio state.
They are known for attacking shrubs, trees, plants and various other herbs. Adults mainly feed on the stems and leaves, whereas the larvae feed on the roots of the plants. This feeding habit cause dangerous effect on the plants, rather than the trees.

Female adult black wine weevil is produced in the early summer, and will feed on the foliage before the process of reproduction. Till now no adult male has been discovered, hence it is believed that this species reproduce without undergoing the mating process, and the eggs are produced without fertilization. The adult weevil may lay between 200 to 500 eggs in its life.

Following is the list of the genus of the host plants, preferred by the black vine weevil:

The Black vine beetle in the larval stage is the most destructive pest. Damage caused by these weevils on the plant roots is so very destructive that it may cause the plant to die. They mainly feed on these plant roots, thereby weakening the roots. In the beginning, the larvae form mainly feed on the tender small roots of the garden plants, but later, in the early spring, they primarily feed on the large root bark or stem bark, completely girdling the plant. This causes the leaves to turn yellow, and stunt the growth of the plant. The plants grown in nurseries are most prone to this weevil, and identifying the infestation is difficult, as they are grown in containers. The plants that are infested in the landscape, often succumb to infestation, and eventually die. The over moist soil during the fall or high population can force this insect to crawl towards the soil, where they mainly eat the stems, thereby girdling (Wiki- complete removal of a strip of bark) the plant completely and eventually causing death.
The adult weevil damages only the foliage by creating the marginal notch on the foliage. It creates notches of crescent-shape that look similar to the notches created by the other species of insects. This seldom affects the health of the plant, enough to cause serious damage. Most affected are the broad-leaved plants like rhododendrons, and some narrow evergreen leaf like yews. Other host plants that are affected by the larvae and adult black vine are the ones found in Poyhouses, Greenhouses, and Houseplant, mainly due to the favorable temperature.

Control the infestation caused by the adult black vine weevil effectively is done by applying a registered or good quality insecticide on the foliage of the host plant during the period of late May and through June. It should be used according to the instructions available on the label of the insecticide. The proper application of this insecticide on the adult black vine weevil can be done by placing a 6 by 6 inch board over the mulch that is under the host plant. Place the pieces of burlap loosely around the host plant”s base as a substitute for the 6 inch board. Around afternoon or prior to the evening, turn over the pieces of burlap or the board slowly. Now, you can see the adult weevil on the surface of any one of the monitoring surfaces. As the adult feed for 21 to 28 days on the foliage of the host plant prior to laying eggs, the application of the insecticide on the foliage should be done after three weeks from the first observation of the adult weevil on the observing surface. Although adults do not come out initially, a second application of insecticides on the foliage according to the instructions on the label should be made after a three week gap from the first application. Spraying insecticide in the evening time may help to control better, as the adults actively feed on the host plant at night or some hours after the sun set.
The larval stage can be targeted by applying the registered insecticide on the container grown plants, as the soil drenches from July till the mid October. For this method the use of nematodes is the most beneficial. While treating these organisms, do not forget to use water as instructed on the label.

It is a known fact that pesticides are highly poisonous. Read properly and follow according to the instructions available on the label of the insecticide, and also check all the safety measures before using it. Handle it carefully, and keep away from pets, children and livestock. The insecticide should be kept in its original container, or it may create some confusion, which can be very dangerous. Also, do not forget to dispose the insecticide container safely.