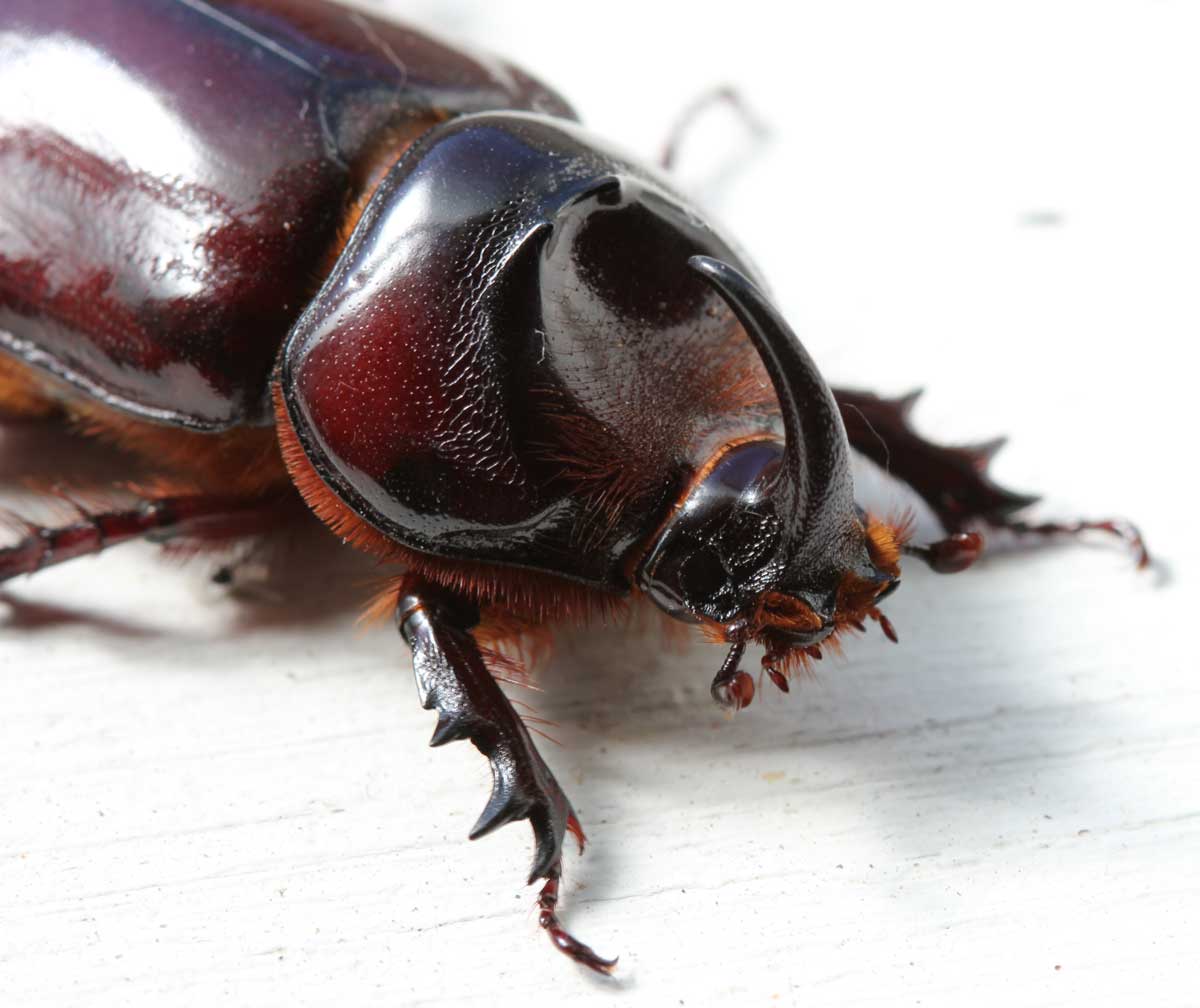 The Rhinoceros beetles are also referred as Unicorn Beetles, Horn Beetles and Hercules Beetles. About 300 species of rhinoceros beetles are known. They are well known for their large sizes and unique shapes. They are among the largest beetles in the world. And they can lift up to 850 times of their own weight. Rhinoceros Beetle is a suitable name for them because they have horns on their heads like the Rhinoceros. They live in South American and Malaysian rainforests. They are also found in the United States. In the tropical north, Rhino Beetles can be found at any time of the year. But, in Brisbane they are found only in the summer season.

The rhinoceros beetle reaches a length of about 60 millimeters. They have two horns, one horn on the top of the head and the other projecting onward from the thorax. At the end, each horn is slightly forked. They are not harmful to humans as they cannot bite or sting. During mating season, the horns of beetles are used in fighting and digging. These beetles have the capacity to fly but due to their heavy horns and size they do not fly far. The blood of these beetles is not used for transporting oxygen. Their tracheal system takes in oxygen from the system of tubes which are placed around the body and connected to the delicate fibers.

The rhinoceros beetles began their life cycle with the female starting to burrow. Their life consists of four stages i.e. the egg, the larva, the pupa and the adult. During the warmer seasons, the eggs are deposited by the female rhino beetle into the soil. After a month in the larval stage, the eggs hatch. The larval stage is so long and in some species it can take many years. Before entering the stage of pupa, the larvae grow and molt twice. The pupa stage takes only a few weeks. Once, these beetles grow into adults, they remain in the ground till the spring season. To attract the males, the female beetle starts releasing pheromones. To lay the eggs the female digs into the soil and the life cycle starts again.

Rhinoceros beetles” larval stage can be several years long. The larvae feed on rotten woods or the compost in which they live. And the adults feed on plant sap, fruit and nectar. They do not eat very much.

The female rhinoceros beetle can lay 50- 100 eggs at a time. They reproduce sexually and there are different female and male beetles. Mostly, they reproduce during the rainy season. To attract female beetles, some species clash with one another. When they mate, the male beetle become aggressive and starts to get very tough. The female beetles lay their eggs in the ground.

Rhinoceros beetles are herbivore insects. As a pest, the rhinoceros beetles were detected on 23 December 2013. They are serious invasive pests. Rhino beetles damage the coconut and other palms. They enter into the center of the crown and injure young and growing tissues of the tree and also feed on the sap. It is very harmful for the palm trees and it can reduce the production of coconut and can also kill the palms.