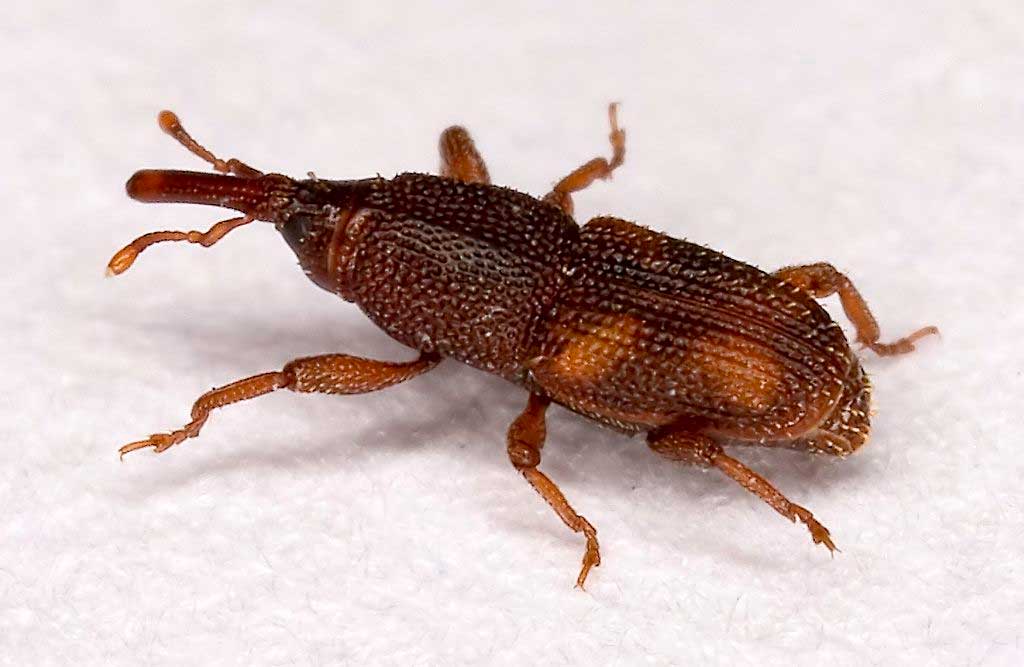 The rice weevil, scientifically named Sitophilus Oryzae is a severe pest found in stored granary products. It is harmful to many crops like rice, wheat and maize.

The fully grown rice beetle is deep brown in color, having 4 clear patches colored reddish, fading to yellow on its elytra and of length 2.5 to 4 mm. In the outward appearance, it resembles the maize weevil, whose scientific name is Sitophilus Zeamais; in order to identify the two species, a dissection is needed. The larvae are legless grubs, white in color and grow inside the kernel. Just by sieve sampling or by Berlese funnel (Wiki- apparatus used to extract living organisms, particularly arthropods, from samples ofsoil) sampling, it is not possible to distinguish them.

Adult rice weevils diet consists of flour or whole seeds. Larvae grow in broken pieces of seeds or in seeds or in cereal materials sufficiently big to contain the larvae, however, it will not grow in flour that is not compacted. By feeding, they get heated and the grains that are infested, are mostly damp from the moisture of the insects, while they respire.

The rice weevil is found all over the world and across Canada, but favors subtropical or tropical surroundings, however, they live in temperate regions where they get protection.

Every female rice weevil lays up to 4 eggs daily and all through her life; a female is capable of laying as much as 300 eggs. The female punctures the seeds or kernels for laying its egg in it, then, it seals the enclosure with a gelatinous secretion. The larvae eat the kernel inside out, and only the empty husk remains.

When the temperature is cold, the cycle of development of the rice weevil is likely to extend over 32 days. But, at an average, a larva comes out in 3 days time, and grows further into the pupa in a span of 18 days. 6 days later, the fully grown rice weevil emerges out of the husk. They survive as long as 6 months.

Although rice weevils are not known to cause direct harm to humans, their destructive feeding habits can lead to grain loss. Contrary to their name, rice weevils feed on a variety of grains, including barley, wheat, corn, oats, rye and sorghum. They may even infest processed cereal foods such as macaroni.

Rice weevils start their life as a small caterpillar-like larva, which hatches in some type of food like a wheat grain, seed or nut. Eggs will hatch within a couple of days of being laid and start feeding immediately. Feeding will occur for 1-3 weeks and then the larva will spin a cocoon in which they will pupate to an adult. Pupation takes about 1 week at which time adults will emerge. Rice weevils present more of a nuisance than some other pantry pests because the adults feed just as much as their larvae, preferring a wider range of diet. Since they fly well and are small, rice weevils can move throughout homes easily finding all kinds of things to eat. Adult females will start laying eggs within 3 days of emerging from their pupa cocoons. Most will lay 300-600 eggs during their 3-6 month life span. Since rice weevils can proliferate egg laying adults, you can find a formidable population in less than one month, and they can be a difficult foe in and around the home. If you suspect you have rice weevil activity, there are several things you must do to knock out current activity and insure new populations won”t quickly emerge.

First, empty all cabinets, shelves and closets where they have been seen or thought to exist. Any food stuff which has them active must be discarded in sealed plastic bags. This will help contain them until the garbage is picked up. If you are not sure if something has activity, store it in a plastic bag and check it every week. If there are any Rice Weevils in it, they will try to get out within a few weeks. If some are found, throw it away immediately. Since this pest is temperature tolerant, don”t waste your time trying to freeze adults, eggs or larva.