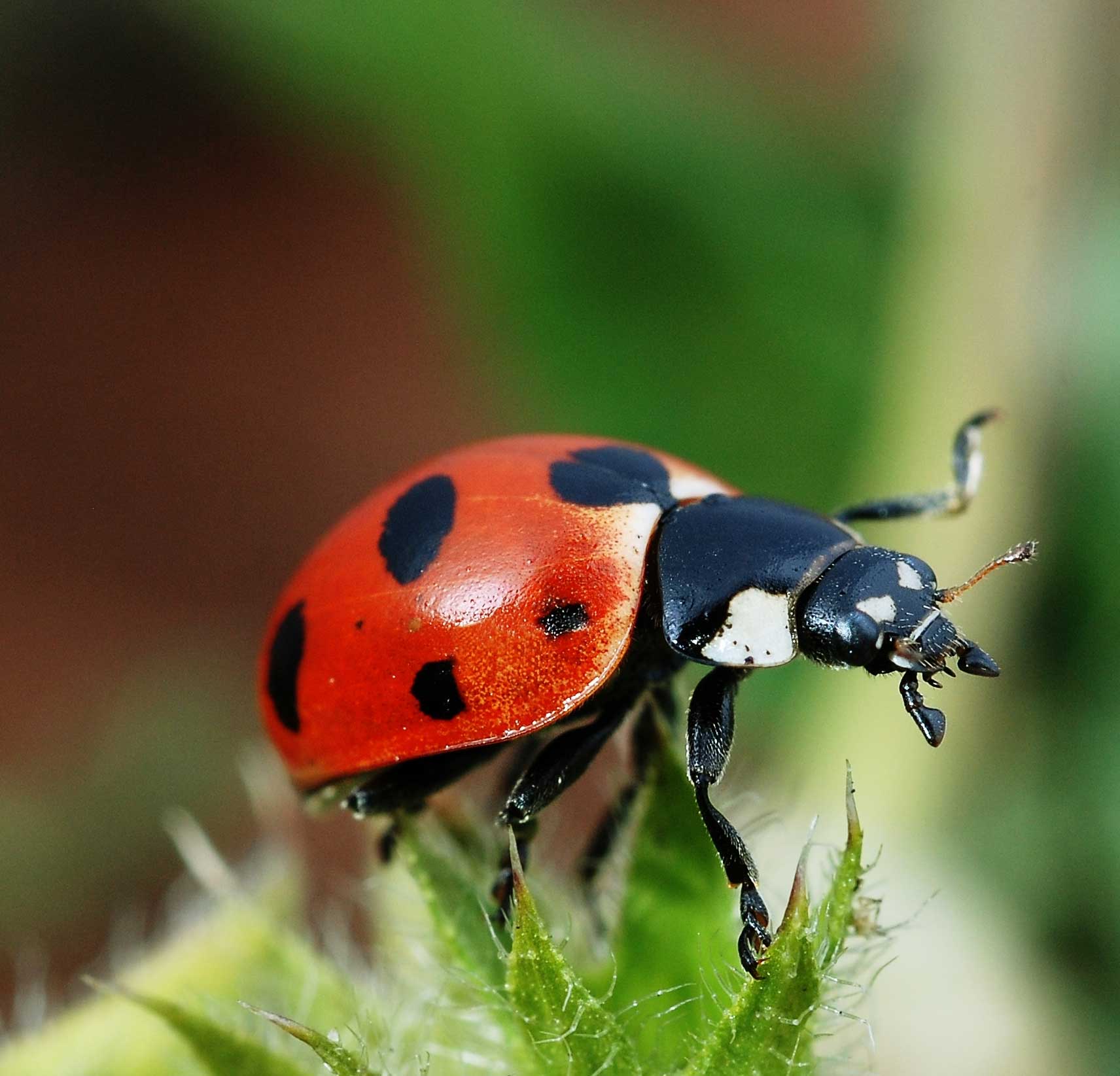 Though named as Ladybugs, they are actually beetles, which are commonly termed as ladybird beetles, in Europe. They possess bright body colors, which acts as a signal to the predators about their foul taste and poisonous body content. But to see the ill-effect in humans, a man will have to eat at least a hundred bugs. It is said that the bright color of their body helps to save them from any harm.

The ladybugs that consumed the most amount of food in its early days tend to develop bright colors, whereas those bugs that ate sparsely had a very pale body color. This also affects the poisonous content in their body, as the brighter bodied bugs are seen to have more poison defenses, when compared to the paler ones. Possessing a brighter body is good, as the predators stay away from most of the brightly bodied insects.

Ladybugs can be said to be non-poisonous to human beings, but a strong toxic effect is seen on the animals. Along with bright color, they also have a disgusting smell, which again keeps the predators away. According to the rules of nature, orange and red colors are warning signals, which indicates the other predator species that the prospective “lunch item” may not be a right choice.

Ladybugs can be considered as a friendly and beneficial insect to humans due to their eating habits. They are very helpful to the farmers, as they mainly feed on the aphids found on the garden plants or crops. They often deposit eggs near the aphid colonies, so that the young form like the larvae also feed on aphids, as soon as they hatch from the egg. They are neither harmful nor cause any poisonous effect on the human, if they crawl on the human skin. But the cannibalistic and poisonous ladybird plague do invade homes situated in the New Shopper area. A very rare species known as Harlequin Ladybird is a very bright colored beetle. It often bites humans when there is a shortage of food or if it is hungry. The biting has an itchy lump as a side-effect. This Harlequin Axyridis species of the ladybug, similar to the other species of Lady Beetles uses a chemical in its body, known as Isopropyl Methoxy Pyrazine For defense from the predation, but along with that it also possesses a higher amount of this chemical in its hemolymph than in any other species and a specific defensive compound known as Hermann. When they are disturbed or agitated, as a reflex action, they start to bleed from their knees, automatically releasing hemolymph. This liquid has a pungent odor, similar to the smell of dead leaves, and causes stains. In some people, this beetle creates allergic reactions like allergic rhinoconjuctivitis, when they come in contact with this beetle. Some species of ladybugs bite humans, presumably for obtaining salt from the skin. But for humans, the ladybug bite do not cause any harm or pain as the feeling is very negligible, but when they walk on the skin, the pressure created by the ladybird”s feet gives a pricking sensation. Some people are allergic to ladybug bites.

During the winter season, Harlequin Ladybirds secretly hiding in their habitat are awakened by the central heating system. Experts say that if they cannot acquire enough food, then they might bite humans for their flesh. The harlequin species prey other rival insects too, and has eradicated around 30% of the two spotted species in Britain.

The northern area of Kent is very popular for this insect, as a huge population of these insects can be seen in Europe, and has invaded the area surrounding Ebbs fleet International. Recently, the population of ladybird species had doubled across the British capital by spreading throughout the region by inhabiting the imported flowers sold in the markets of London that come from different parts of the continent.

The survey website of Harlequin ladybird had been categorizing its sightings since the first appearance in this location in the year 2004.

The scientist and the experts reveal some facts about the ladybird websites like-:

The harlequin species of ladybird can be commonly seen on certain trees like Lime, Maple, Sycamore, and in the coniferous woodland.
Some migrated from Europe in the areas of English Channel, while others reached this place by arriving on the flowers imported from the continent.
At a time, the female harlequin can lay around 1000 eggs.
The diet of the Harlequin Ladybird includes the eggs of moths, butterflies, other species of ladybird, nectar and pollen.
Eating-while-flying type of birds who are swift and gulp are quite immune to the Harlequin Ladybird”s defensive chemical.

The researchers of Liverpool and Exeter Universities reveal that there is a difference between the warning signals of each animal, which shows how poisonous each individual beetle is to the predators.
During the observation period, the researchers nurtured ladybugs of seven spot species on either high or low quality diet. The researchers gave low and high quality diets to seven-spot ladybugs. They noticed the several effects visible on these insects due to the varying diet offered to the ladybugs that were maturing. Thos effects were visible as warning signs, toxic chemical level, and the defense-signal relationship.

Those ladybugs who were fed with a superior quality food had bright pigmentation, which resulted in bright reddish wings, compared to the ladybugs that were given poor quality diet.. They also possessed a greater level of precoccinelline, which is one among the prime toxic chemicals in their body. Hence, the studies reveal that the ladybugs that were heavily fed have more capacity in both, forming a brighter color as well as for the warning signals and the production of the toxic chemical. Hence the chances of falling prey to the predators are less in the case of this ladybug.

Are Ladybugs Poisonous to Dogs?

Ladybugs are actually not toxic or harmful to dogs, unless they have been sprayed with bug spray or pesticides recently. Dogs tend to eat anything they find like flies, bugs, etc. This can be harmful in such cases. Not only that, the taste, but the very pungent smell and bitter taste can sicken the dogs. So preventing your dog from eating bugs will be a good option.