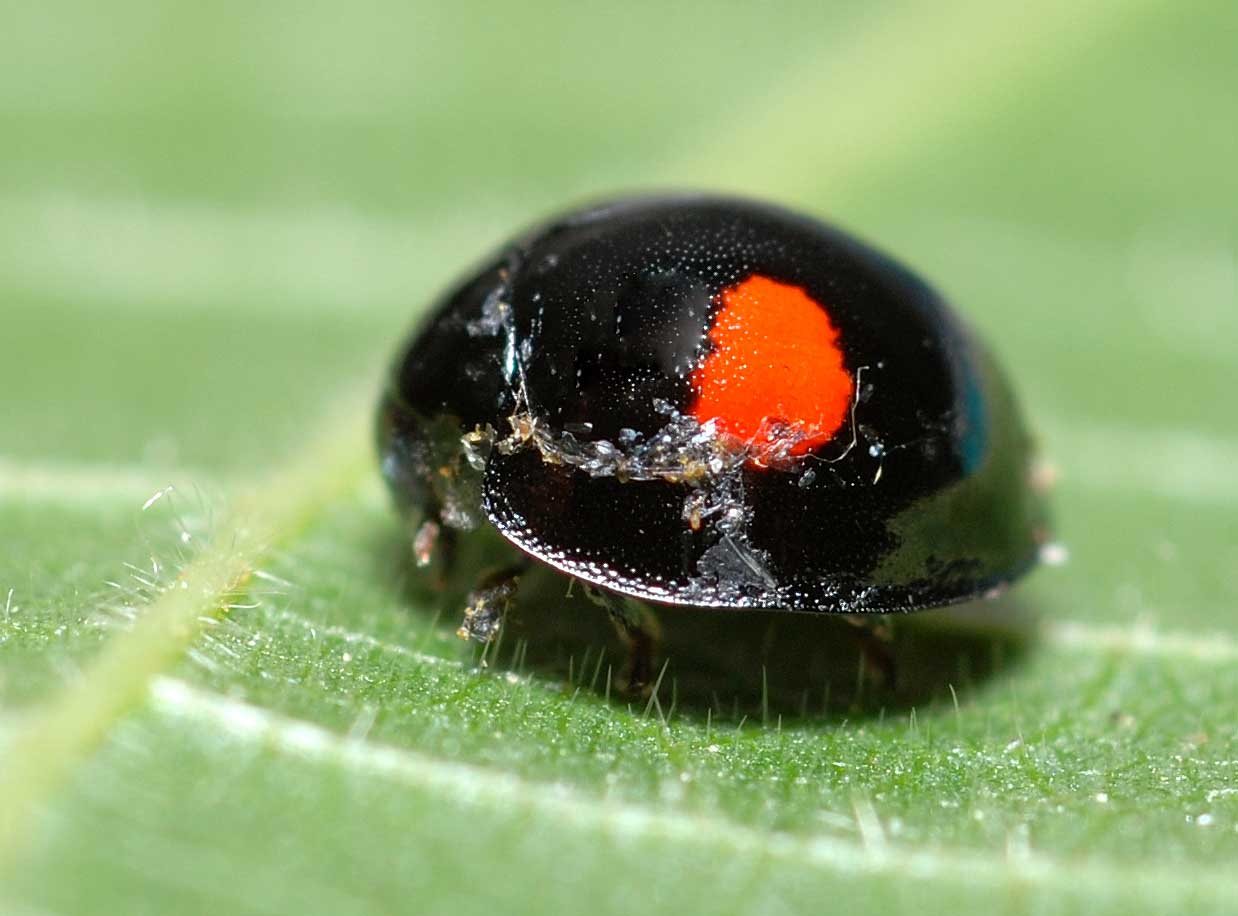 Twice-Stabbed Lady Beetle, commonly termed Chilocorus Stigma, is endemic to the United States, as well as Canada, but is not commonly seen in the western parts of the Sierra Nevada. The population of this beetle is more in areas of California. It has been taken purposefully and introduced in the Hawaii regions, and has also reached Oceania. It is a small shiny black beetle with a peculiar red spot on both the elytra. The other parts of the body are completely black in color, except the stomach, which is either red or yellow.

Similar to the other species of lady beetles, this species also have an oval shaped elytra. It attains a size of 3.8- 5.0 mm, when completely matured. There is no visible sexual dimorphism present in this species, but the female looks a bit larger than the male. Even the larval form of this species is black, but is covered in spines.

The adult Black ladybug migrates from one tree to another in search of food. Generally, this species like to rest most of the time, which helps it to digest the food, and the remaining time is spent searching for prey. The period of resting varies with several climatic conditions like temperature or harsh weather of the environment.

In Canada and the Northern US, this kind of lady beetle undergoes two generations. But in particular places like Florida, it can produce multiple generations over a year. The activity of overwintering adults is at its highest during the spring. Inside the edges of tree barks, and under the carapace of scale insects, eggs are deposited separately. At the end of May, larvae appear, and pupate after 4 Instars. During two weeks it stays in a pupae state. Like other Coccineldis, this species of lady beetle show the same habits in catching the prey. They tend to reproduce, while their prey”s population is going up. The species was considered as a biological controlling method against the scaly insects and aphids, affecting the well being of plants. The red coloring of the spots is a sign of toxicity or distaste to the predator. For the predator, the red color means toxicity.

Deciduous trees are the place where you see this kind of lady beetle, particularly in average sized trees. This lady beetle is mostly found, where there is a big number of scale insects. C. Stigma usually lives in the terrestrial type of habitats. It mainly eats aphids, scales and mealy bugs present in those types of habitats. This insect is useful in the forests, comprising of commercial products like citrus groves and orchards. C. Stigma has the ability to control the activity of Hemlock pest, which harms the Hemlock trees, present in North America. Until now, C. Stigma has not yet been used for commercial purpose.

They are categorized as carnivorous, mostly feeding on small insects like mealy bugs, aphids or scaled insects, found in Christmas tree plants. It also eats the pest of beech and citrus trees. In terms of quantity, an adult feeds himself at a rhythm of 50 eggs of birch aphids per day.

In a complete year in Canada and the Northern United States, C. Stigma is able to generate two life cycles, but it can generate multiple life cycles in the south. When there are colder months, they pass through it by staying inside the ground litter. Insecticides are negatively affecting the C Stigma as well as other lady beetles by reducing their wild population. To protect the C Stigma, while controlling other pest insects, people are advised to choose natural alternatives, while using the pesticides.

Every single Chilocorus Stigma has different chromosomes. That applies to the number and the structure of the chromosomes present. The chromosome disassociations or fusions are the reasons behind the differences of chromosomes.