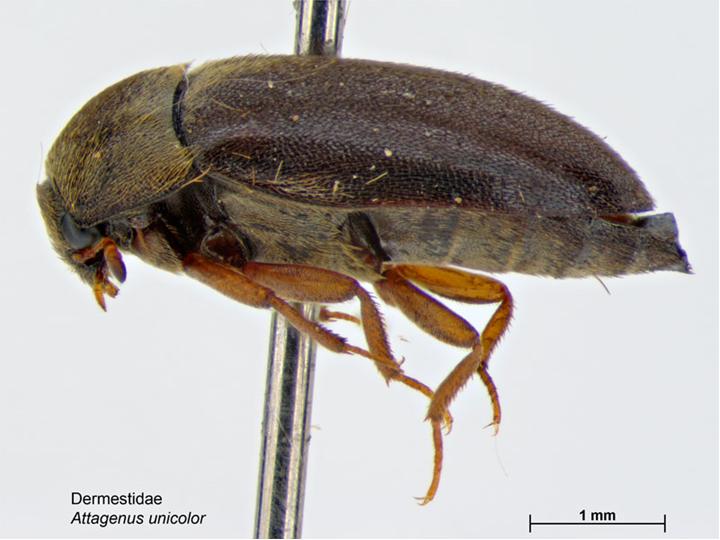 In the United Stated, Black Carpet beetle is the most destructive species. It found throughout Mexico, the United States and Canada. It is common in Pennsylvania. This beetle damages household products which contain Keratin, a protein found in the hairs and feathers of animals. It also attacks plant products like grains and cereals and as well as synthetic fabrics. They can cause economic damage to the fabrics in the household. In the early 19th Century, from Europe, these beetles have been imported to the United States. In Europe, these beetles are considered as a major pest.

Adult Black carpet beetles are attracted to flowers and in the spring season, these beetles fly into the house. The larvae of this beetle are very different from other beetle larva. It can reach 12.7mm in length. The larva wanders into the Upper floor and the other parts of the house from the nest.

The life cycle of Black Carpet beetles undergo a complete metamorphosis. Depending on the temperature, the life cycle of these beetles ranges from two months to two years. Adult black carpet beetles are oval shaped and they are 1/8 to 3/16 inches in length. Female beetles lay eggs and these eggs are deposited in the cracks, lint and other places where the supply of larval food is available. Larva stage is the most damaging stage. The carrot shaped larva is narrow and long. The body of this beetle is brown to black colored with stiff and short hairs on it and they also have a long Bristle tail. The larva stage requires three months to two years. After the majority of larval feeding and growth occurs, the beetle pupates in its last skin and this stage lasts for 6 to 24 days. The Pupa is cream to white colored, but rapidly they turn color into yellow and also darken with age. They do not move or eat at this stage. After this stage, the adult beetle emerges. Depending on the availability of food and other environmental factors, the average lifespan of these beetles are 9 months to 3 years.

The larva of Black carpet beetle eats animal products such as wool, fur, leather, silk, dried meat, feathers, and hairs of animals, dried plant materials and dead insects. These beetles are considered as general feeder. Adult beetles can feed on nectar and pollens of the flowers.

The Female Black carpet beetle can lay 50 white and small eggs and these eggs hatch in 3 to 6 days. These beetles reproduce quickly in heated buildings. During the summer and spring season, these beetles mate outdoors. The females lay their eggs in dark places. The eggs are laid under baseboards, in floor cracks or in dark protected places. Warehouses, museums and homes are demanding locations to these beetles. Once the eggs are hatched, the insects spend most of its time in the larval stage

The black carpet beetles are a pest of kitchen cupboards, woolen clothes, carpets and other clothes. These beetles are important pest in rugs and wool carpets. They feed on plant materials such as grains, books, pet food and spices. As a pest they damage the household articles and feed on them. They are also considered as museum pests because they are troublesome to the museum. These beetles can cause irreparable damage to the carpets and other products. Their infestations are recognized by their presence, because they gather around lights and windows.