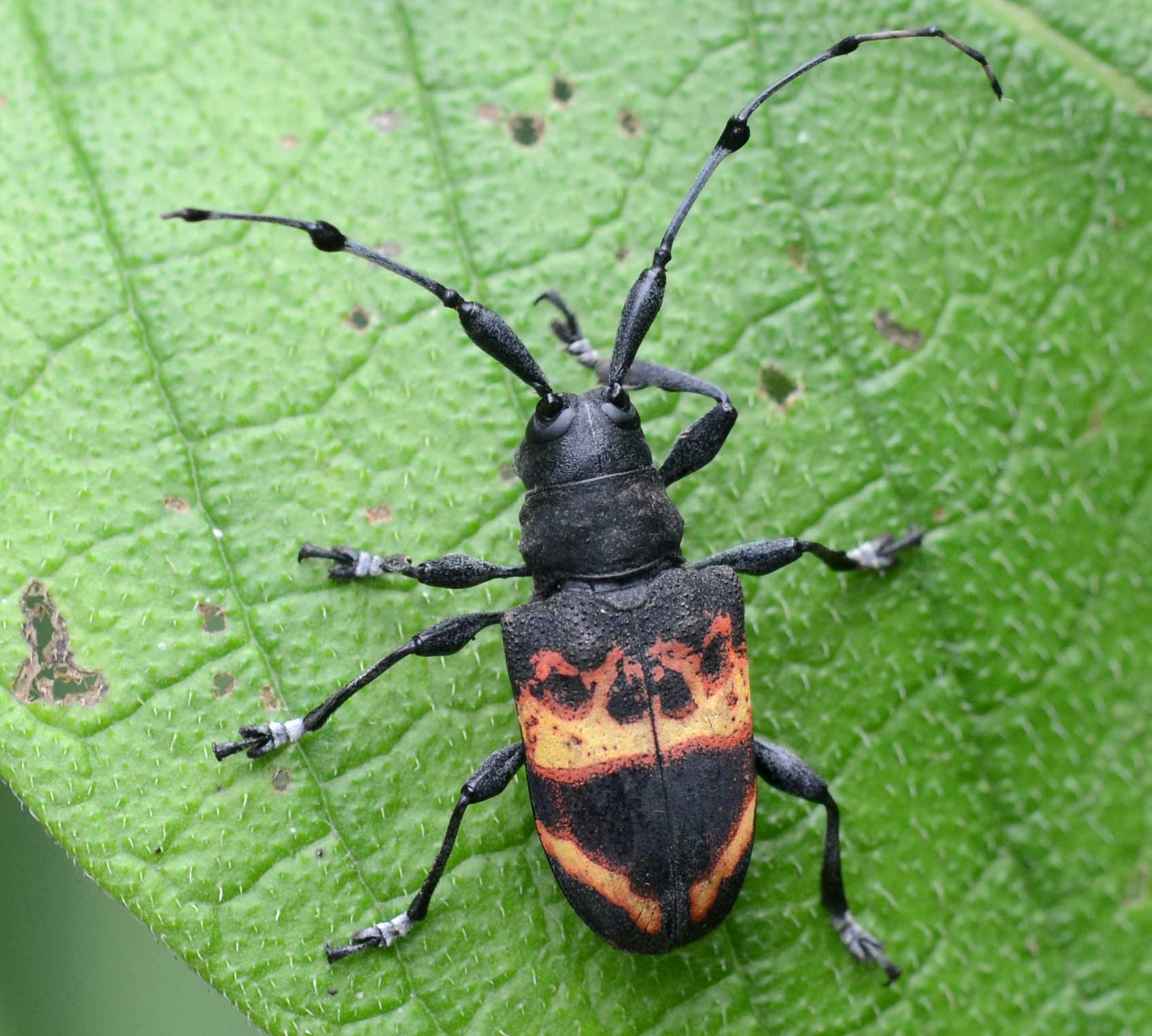 The longhorn beetles are also referred as Longicorns or Long-Horned Beetle. This cosmopolitan family of beetles is characterized by very long antennae that are longer than or equal to the beetle”s body. The family Cerambycidae of the Longhorn Beetle has over 20,000 described species, out of which, above 10,000 is from the Eastern Hemisphere. Most of them are considered as serious pests, because the larvae form of beetles makes holes in the woods or bore into it, thus causing damage to the living trees or wooden items inside a building structure, like furniture, doors, window panels etc. Thus, they acquired the name, “Round-Headed Borers”.

The Cerambycidae family can be classified into ten subfamilies, namely

This subfamily consists of more than 716 genera that include 3,889 species. Several genera and species of this subfamily are distributed widely in the America, of which, around 430 species belonging to 130 genera are seen in the Neotropical region of America.

This subfamily has more than 150 genera in the whole world. This group can be seen in a most diverse state in the parts of the Northern Hemisphere. Till recent times, the Necydalinae subfamily was placed in this Lepturinae subfamily, after which it was given a separate identity. A total of five tribes have been recognized till now in this subfamily.

This subfamily consists of very few genera. These beetles look very different than the usual typical ones from the Cerambycidae family, as they have very short antennae. The tarsi are very clearly segmented into 5 parts, due to which they look similar to the Stag beetles.

This subfamily includes only a single tribe, but has a lot of genera. The name of the only tribe is Dorcasomini.

Necydalinae, a small subfamily that was earlier considered as a tribe and placed in the subfamily of Lepturinae. Though they come under the beetle family, most of the species are actually wasps or bees. Only a species known as Elytra, though quite short, looks like rove beetles.

The Lamiinae sub-family is also commonly referred as flat-faced longhorn beetles that include more than 750 genera.

The Spondylidinae subfamily is also a small group that includes only around 100 species. Most of the species can be found in the coniferous forests situated in the Boreal Hemisphere.

Prioninae Subfamily beetles are typically huge in size, about 25 to 70mm, and usually found in black or brown in color. A few species, especially the male beetle are seen with large mandibles, often used to fight with other beetles. They are supposed to be nocturnal, and get attracted towards light.

As stated above, most of the species belonging to the longhorn beetle family have very different appearances and characteristics from each other. Some have long horns, whereas some have short ones. These beetles can be found in a wide variety of colors. A species referred to as Anoplophora Glabripennis is typically very large in size that ranges between 1 and 1.5 inches with antennae of 4 inches length. Their outer color is glossy black, and has white spots on both the wings. The antennae often have a white and black banded appearance. The longhorn beetles of this size belonging to the Cerambycidae family usually fly only up to a short distance. The upper part of its leg is whitish-blue in shade, and you can find many markings on the covers of their wings.

Some types of long horn beetle take 2 to 3 years to complete their life cycle. They do not enter into the pupa stage until they attain a certain weight. During the overwintering period, these beetles stay inactive, which is also known as “diapauses” condition. In the summer following the winter, they continue their lifestyle in an active way. This beetle larva initially develops a gallery for feeding near the cambial part, and later a big oval tunnel in the Heartwood or Sapwood. This insect discharges frass (insect excreta) from the oviposition site of the tunnel. The transformation process to pupa often takes place at the end of the tunnel in early summer or late spring. Some features like fecundity (Fertility) and longevity of the beetle depend on the type of host plant of the larvae and the temperature. After emergence, the female of this species undergoes an obligatory feeding period for maturity. As soon as the female emerges, they have the capability to copulate, even if they possess immature ovaries. According to some studies, the maturation period in the female beetle extends from 9 to 15 days. The adult male beetles as well as larvae feed on wood by excavating and chewing the parts of the trees with the help of small, but strong mandibles. This is also said to be a characteristic of the beetles of the Cerambycidae family. The long antennae in the male beetle are used to search other mate”s sex pheromones. The expected lifespan of this creature is 50 days for adult males and around 66 days for adult females, but to reach maturity, the larvae form will take at least one to three years.

Most of the adult longhorn beetles feed on twigs, leaves and other matters of plant. In their original habitat, the larvae beetle eats parts of the healthy phloem, bark and xylem belonging to the Hardwood trees of any of the 24 species. That is why; these creatures are considered as harmful pests, because the trees on which they feed get damaged completely.

Most of the beetles can fly up to a short distance of around 400 yards. But still, the chances of laying their eggs are more on the same host plant, from which they themselves have emerged. They tend to migrate to other places only when the population density of their original habitat increases. During the months of the summer period, the adult female who had already indulged in a mating process, chews around 35 to 90 depressions into the bark of the host tree, and then lays eggs in every pit. Most of the eggs hatch within 10 to 15 days.

The emerged larvae look straight, and have a boarder front end, compared to the rest of the body. This appearance of the larvae is also a special characteristic of those of the Cerambycidae family, and they also use fleshy pads over their segments instead of legs, to search their tunnels. This pad presses against the walls of the tunnel to get a grip while contracting and stretching their body

These longhorn beetles are very dangerous and detrimental to the ecosystems of their habitat. In China, around 40% of plantations and trees have been destroyed. In the province of Ningxia of China, an estimate of 50 million trees was ruined by these beetles over a period of three years. They have the capability to change the composition of the hardwood forests situated in the North American parts.