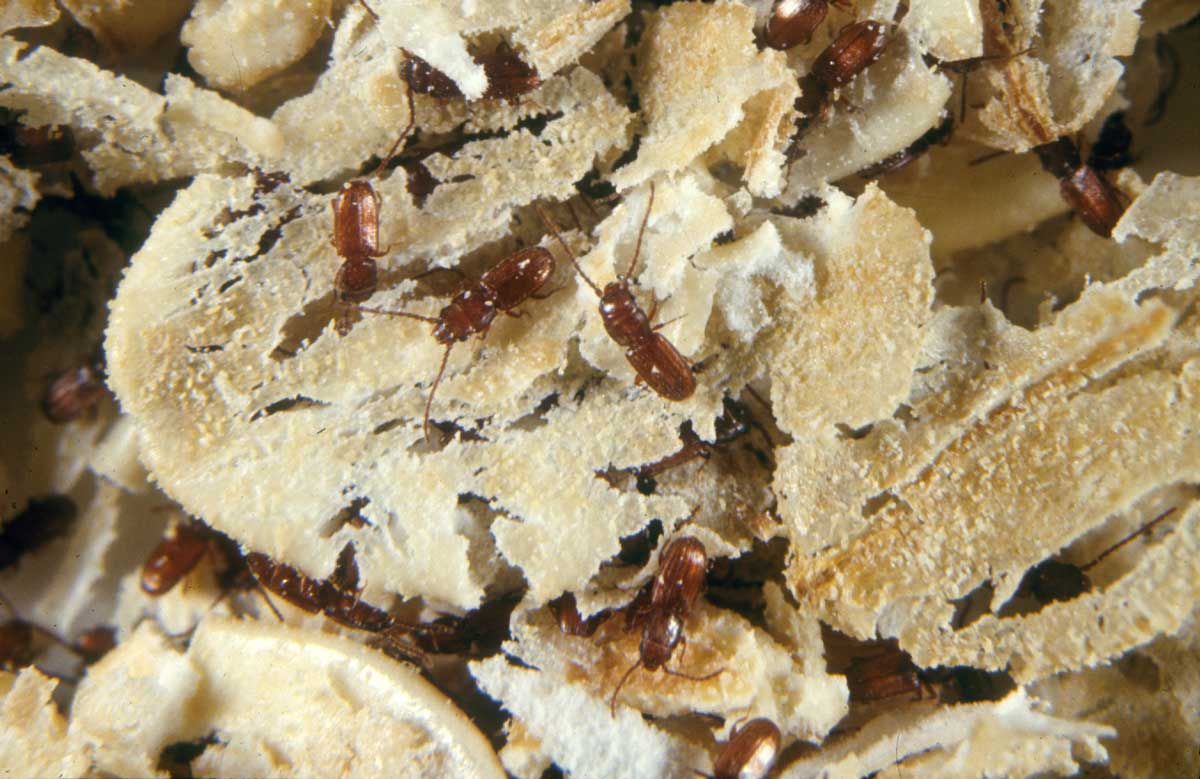 Most beetles of this species attain a size of around 2 to 3 mm, and posses a dark red or brown colored body. They have a slightly flattened shape of the body, and most species found in Canada can be easily distinguished by their six projections situated near the thorax, which looks like the blades of a saw. Some types of this species also have prominent and large eyes that make the head shape look pointer compared to the beetles of other species.

Commonly seen across Canada, the grain beetle species can be found in various types of man-made constructions like warehouses, grain elevators, railroad cars, mills, cargo ships and home pantries, where usually food products are kept. As they possess a flattened body, it is an easy task for them to penetrate and live in the crevices and cracks. Some grain beetles species can tolerate colder climate than the other species, which helps them to inhabit the areas towards the northern parts.

Grain beetles are named after their feeding habits; the main food they feed on is grains of all types. Each species may eat different types of grains, but the list of grains prone to infestation is more or less the same. For example, the saw toothed grain beetle mainly prefers wheat, barley, oats and other packaged and processed food items present at home, whereas the Merchant Grain Beetle likes to eat seeds, cereals, dried fruit and brown rice, oatmeal and bran.

Grain beetles undergo around four stages in their life cycle, namely, the egg form, larval form, pupal form and then the adult form. Generally, the female beetle lays eggs in such locations, where the food supply is available. The eggs are so small that it is invisible to the naked eyes. Each species lays eggs ranging from 40 to 300 in a single year. It takes around 2 months time to attain maturity and transform into an adult beetle. Generally, the adult beetle has a life span of around 6-10 months.

Food products that include breakfast foods, cereals, Flour, meats, dried fruits, pet foods, and several items are fed upon by the Grain Beetles. While the insects are not known to carry or pass any diseases to humans or pets, they make pantry products unfit for consumption. Additionally, when the pests are found in the purchased grains, they typically alarm people by their presence and may indicate the existence of an infestation problem where the product was manufactured or bought. Grain beetle infestations can cause granaries, warehouses, mills, and even retail establishments great loss of business and profits over time.

Detection signs are difficult to realize as their larval and egg farm is almost invisible to the eyes. But checking the temperature of the infestation prone product will help to understand this beetle”s presence. When the grains are severely infested, it tends to overheat. The sign of adult beetles crawling near the area of stored products is also a sign of infestation. If the stored products are not properly stored in sealed or airtight containers, the beetle”s exit and entry holes may also be visible in the ordinary storage place.

The initial stage to prevent the food products and grains from infestation is by storing them in a sanitized and clean storage area. Purchase only required or small amount of dried seeds, grains, spices, cereals and other products, which will be used within a short time period. If possible, store the products in freezers, as it is one of the methods to avoid the growth of these beetles in the foodstuffs. Some other food products can also be heated to avoid infestation by these beetles. Cleaning the corners and crevices of food storage containers and areas, using a vacuum cleaner, as well as cleaning the food-spills quickly are the certain methods that should be done to avoid these beetles from entering the foodstuffs and grains.

The grains and the foodstuffs that have been completely infested should be thrown away. Sometimes heating or freezing the infested grains or products can help to solve the problem before becoming too severe. To solve the smaller infestation, store-brought traps, insecticides and regular vacuuming can help. But to solve the extreme cases, contacting a professional pest control expert will be helpful.

The adult warehouse pirate bug is around 0.1 inches in length. They are commonly found in grain storages. It evolves within 16 days at a temperature of 90 degree F. A female lays around 150 eggs in her lifetime. This beetle commonly infests the stored corn and similar items.

The adult foreign grain beetle attains a size of around 0.1 inches and has a camel-brown shaded body. The larval form of this beetle is white or grayish in color. It is mainly a fungus and mold eater, and hence commonly found in grains that have a high content of moisture.

The adult form of this beetle attains a length of around 1/12 of an inch, and has a flattened as well as a reddish brown shaded body. Mainly this beetle infests the grain by depositing its eggs, and the larval form feeds on the wheat kernel”s germ layer. It is a serious pest, attacking the stored wheat.

The adult saw-toothed grain beetle attains 0.1 inches of length and has a dark brown colored body. This beetle deposits its eggs in the crevices of the grain kernels.

The adult flour beetles attain a size of 0.1 inches. The red flour beetle is the most common of this group, and is commonly found in stores of wheat. They can also grow on undamaged grains, especially when the moisture content is more than 12%.

The adult Cigarette Beetle measures around 2 to 3mm in size, and has a small brown body. They are known for infesting spices, rice, pet foods, dried seeds, books and even pharmaceutical products. It is also a significant tobacco product pest.

Grain weevils are of various types like wheat weevil, rice weevil, maize weevil and many others. The rice weevil attains a size of around 3 mm in length. As the name suggests, it mainly infests rice and similar products. The other weevils attack wheat, corn, barley, oats, maize, nuts and sunflower seeds.

The only species referred to a Rhyzopertha Dominica is commonly termed as lesser grain borer, Australian wheat weevils, stored grain borer and American wheat weevil.This beetle is found worldwide and is quite popularly considered as a serious pest of cereal grains that are stored.

Oryzaephilus Mercator, commonly referred to as merchant grain beetle is a dark brown shaded, slender bodied beetle. It is a common pest that infests nuts and fruit products as well as biscuits or similar products. The adult beetles are capable to fly, but are very rarely found doing so. These beetles are spread throughout the world as they inhabit the oil cakes, unprocessed cereals and other grains that are transported to such places.