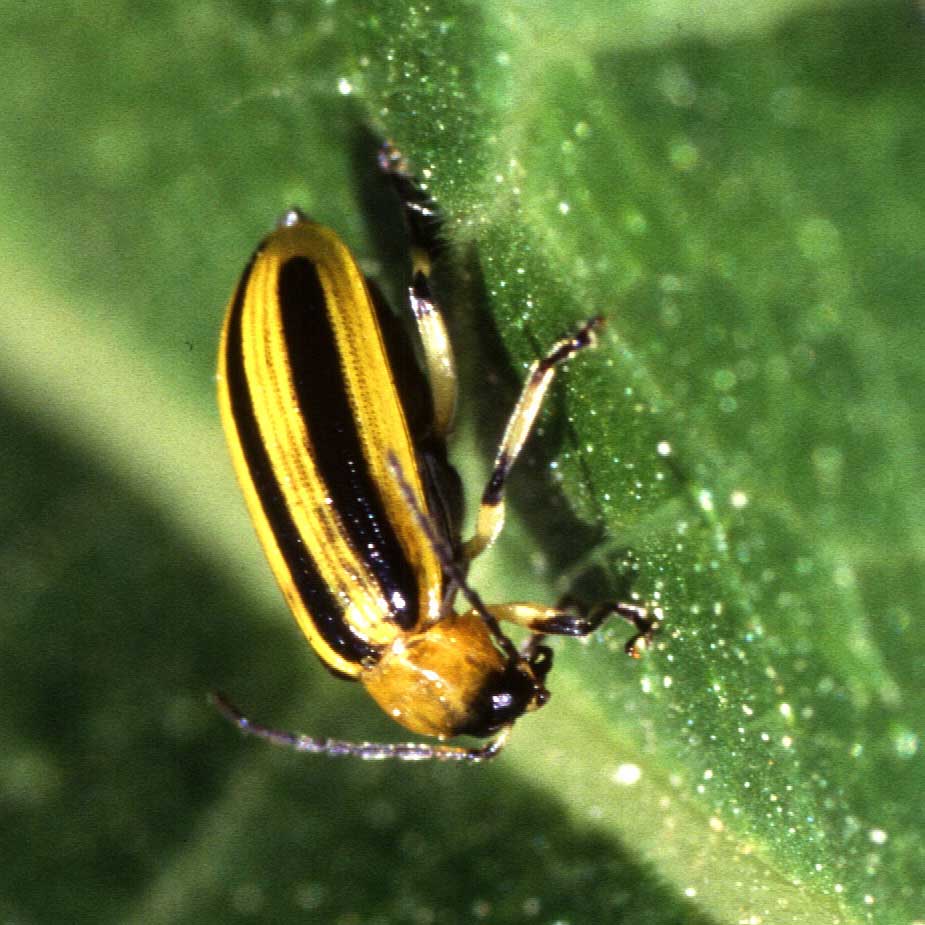 Cucumber beetle is a general name by which two genuses of beetles are named; they are Diabrotica and Acalymma, both of which belong to the Chrysomelidae family. The grown up ones are seen on Cucurbits like cucumbers and other types of plants. Most of them are dangerous pests of agricultural crops. The larvae of many cucumber beetles are called Corn Rootworms.

A few of the prominent pests are the spotted cucumber beetles and their larvae. Some of them are:

The body of the cucumber beetle is green with a yellow tint, having black stripes or spots, with the head colored black. They have a length of ¼ inch. The shape of their eggs is oval and the color orange with a yellow tint. The cucumber beetles lay their eggs in nests built in the soil, where plants are available. The size of the larvae is ¼ to ½ inch in length, they are colored white to beige on the body, with head, brown in color and at the end of the tail are brown dots. In spring, the larvae destroy the stem and roots of the plant, for a duration of two to six weeks. The adults and their larvae do harm to broad beans, asparagus, potatoes, eggplants, tomatoes, a variety of fruit trees, squash, peas, corn, which is liked by them, fruits, cucumbers and melons.

Following diapauses a mass of adults come into sight during the spring season, for feeding on flowers, foliage and pollen of the Cucurbit varieties. Based on the region in which they are, around 1 or2 generations of beetles emerge out. The ultimate generation settles into a different period of diapauses to stay out the winter.

The female cucumber beetle lays the eggs in or on the neighborhood of the stem of the feasible host plant, which mostly belongs to the Cucurbita family. The sizes of the eggs are less than 1 mm and are colored brilliant orange. The eggs hatch within a short time and the larvae consumes food from the root of the plant.

Post overwintering, once the fully grown cucumber beetle surfaces and has found its food, it lays its eggs in the ground adjacent to plants, which the larvae use as nourishment till their hatching in almost 10 days.

Two to four weeks prior to pupating, the larva feeds on the stems and root of the plants. Further, after two weeks, they come out as adults. According to the climate, there is a possibility for two to three generations of cucumber beetles every year.

When the infestation of the adult Cucumber beetles is high, destruction may be caused to the leaves that are springing out, of the tender Cucurbit plant, and the cotyledons and stems.. Over feeding, destroys tender pumpkin and squash plants, which results in decreased yield. Plants that are well matured are tolerable to feeding damage with hardly any affect the yield. The habit of feeding on the lower portion of the stem and roots by the cucumber beetles increases the possibility of particular diseases, the significance which has not been measured.

The adult form of the cucumber beetles is big in size, compared to the common insect’s standard size. It has a hard exterior shell, and is usually preferred by big predators. Wolf spiders, a typical species are known to prey on this beetle present in Cucurbit crops. These beetles avoid those wolf spiders, eats less, when they feel the presence of these predators in the surroundings. These beetles are also preyed upon by ground beetles. Bats are also a known predator of this beetle.

A Braconid Parasitoid Wasp and a Tachinid Fly are known to infest the striped adult cucumber beetle. They create a great impact on the health of this beetle. Some anecdotal proofs exhibit that the parasitoid population has the ability to increase its population in the organic field in a few years. Its impact will be so severe in the organic fields compared to the other conventional fields. The insects, the wasp and the fly inhabit inside the beetle due to which, their exact numbers are difficult to specify. The only way is to rear the cucumber beetles in a suitable cage, till those parasites come out.

Organic insecticides are not always considered as an effective controlling measure against these beetles, hence some cultural controls should be used instead. Some of the control measures are crop rotation, row cover trap cropping, inter-cropping and using reflective plastic mulches.

No doubt reflecting just how difficult cucumber beetles can be to control, particularly within the system of organic farming. A few other more unusual approaches have been attempted with a degree of success. The following two approaches provide an instant remedy for the removal of cucumber beetles:

The customary weed flamers use the flaming method to eradicate the cucumber, but they use this only on trap crops, nor the main ones.. This approach may be less effective, though, with striped cucumber beetles, which often concentrate their feeding at the base of plants, and frequently head down into the soil when disturbed.

Sucking up beetlesusing a vacuum (e.g., D-Vac suction sampler) or a reversed leaf-blower can be an effective way to remove adult beetles, in particular from trap crops where a limited area needs to be treated It would be challenging to suck any substantial fraction of beetles from a large area.

Some other control methods are by covering the Cucurbit plant under a cloth or cheese cloth cover, which is light and thin enough to allow air and light to pass, but can keep away these harmful insects. Though this method was used in 1841, it can still be used successfully. Successful covers for row crops are also commercially available that can also protect this plant well. Trapping the crops can also give some relief. Planting the Cucurbits in the early season will help to attract the cucumber beetles ready to overwinter, and these can be killed by using insecticides. This indirectly reduces the attack of this beetle on the plants grown in the later period of the year. Make sure to pull out the trap crop”s remaining vines, and completely burn them after eradicating the cucumber beetles. Trap crops cannot be solely considered as a good control method in eradicating this beetle.

Chemical utilization is almost necessary in commercially growing plants. To prevent the damage of seedlings by this beetle, treating the soil will be a good option. Generally, the cultivators apply insecticides during the planting period to overcome the problems of this beetle, especially during the seedling period. Foliar treatments are also available during the growing stage, if required.