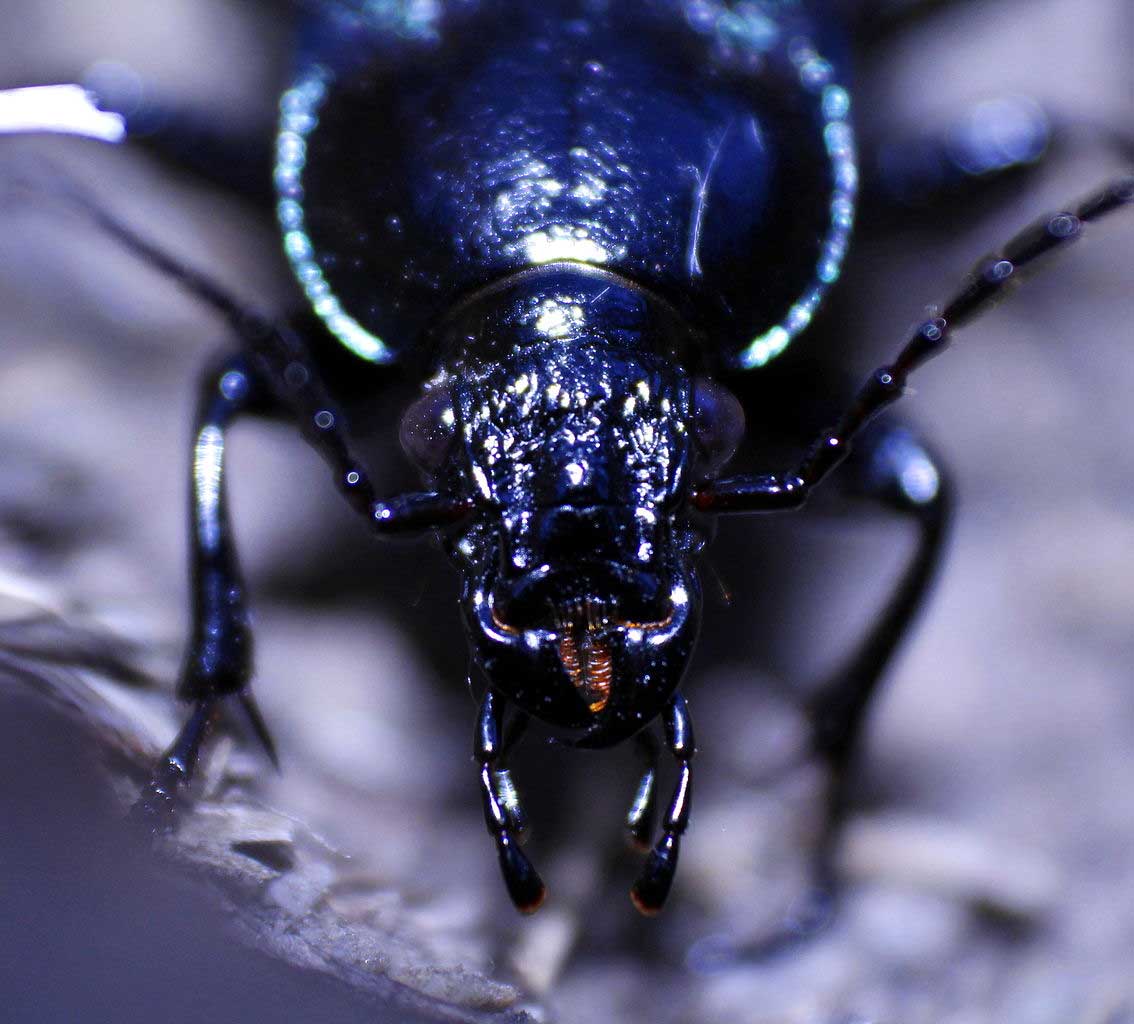 Different species of this family have different attributes. Most of the species are seen in a metallic or shiny black color, but many others are also found in orange, yellow or green color. These beetles are longer in structure with large head and possess a hairy look. They possess strong wing covers referred as “elytra”. But in most of the species, this wings cover is fused together, which makes these beetles unable to fly, especially the ones from the Carabinae subfamily.

The ground beetles are commonly found under the tree barks, logs, in the sand near the river and ponds or under the rocks. They can also be seen in moist areas like wet wood, gardens and parks. Earlier these beetles were seen in West Suffolk and Norfolk, but now they can be seen in continents like Europe and other countries like France and Great Britain.

The Ground beetles are carnivorous in nature, and feed on any invertebrates that they can catch or overcome. They are well known predators, and are renowned as the fastest animal on land, in relation to the length of its body. The larvae, as well as the adult beetles of this family are brutal hunters that catch the ant pupae, fly larvae and other small animals. They have big eyes and good eyesight along with a high running speed that helps them to catch their prey easily.

Though they have a strong exoskeleton, some predators try to attack these beetles. Hence, most of the species hide in the daytime and only feed or becomes active at night. Some of the attackers” are:
Known Predators:

While planning to mate, the female beetle starts searching for a male beetle. For this purpose, the beetles secrete a special synthetic chemical known as pheromones to attract each other. Some other species also emit different scents like fatty acids or amino acid synthesis to produce a specific smell. When they meet each other, many courtship rituals are carried out properly before the mating process. The male and the female usually vibrate the object on which they carry on the mating process. The male also strokes the antennae of the female beetle. Later, the eggs are fertilized by the sperm of the male, thus sexual fertilization takes place in this species. The eggs are laid one by one, and not in a group. This beetle is capable of producing many dozens of eggs. It prefers to lay eggs on soft and moist soil.

The female beetle lays dozens of eggs on moist soil during the spring season. These eggs hatch to produce larvae. The ground beetle larvae mainly inhabit the soil till the period of metamorphosis takes place. To emerge into an adult, it encases itself into a cocoon during the winter period. By the end of the fall, this creature transforms into an adult. Though it looks like in a dormant state inside the cocoon, it actually undergoes development process for transformation. After the beetle reaches maturity, it emerges from the cocoon to form an adult beetle, and lives for approximately 2-3 years.