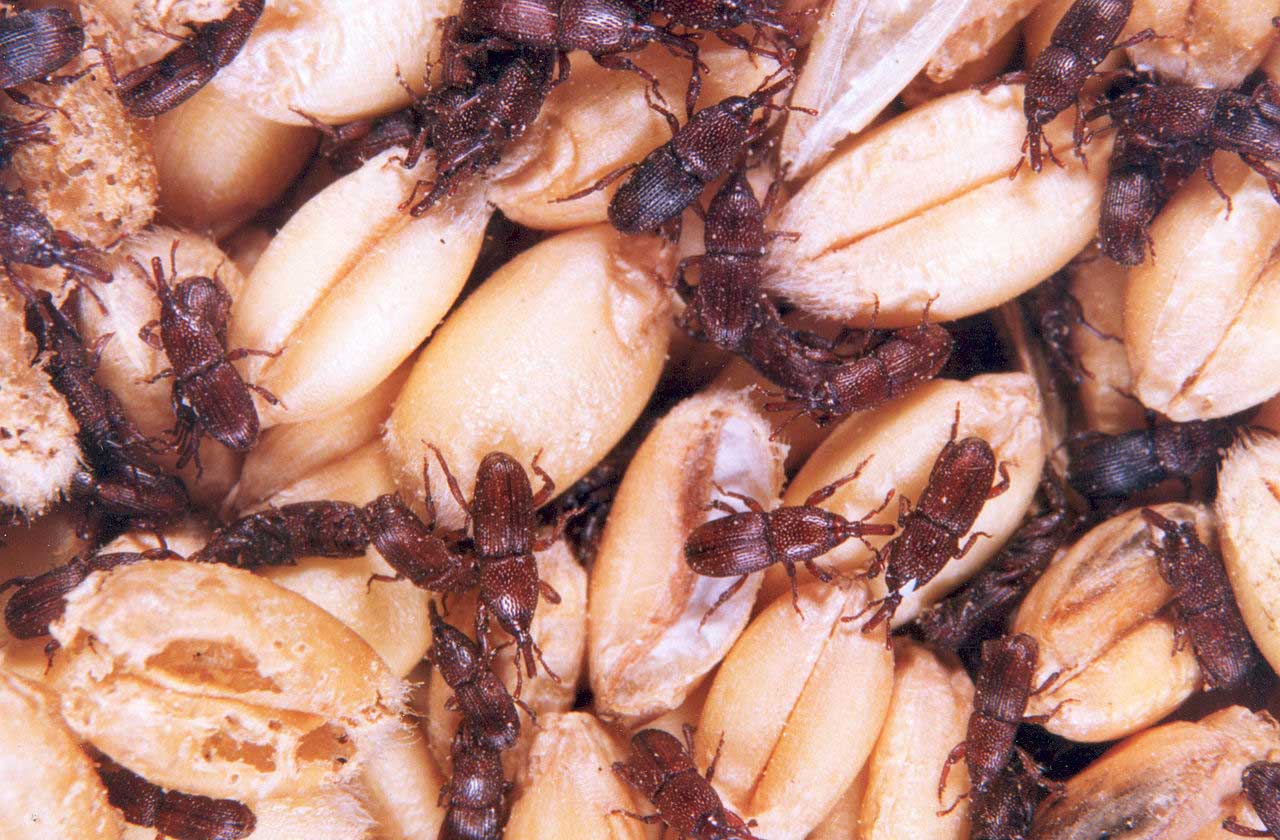 Flour weevils are a generic name for a variety of weevils belonging to the order Coleoptera and the family Curculionidae, which include the grain, rice and wheat weevils that have the following common characteristics.

Characteristics: The flour weevils have forewings that have a leathery and hard configuration, uniting towards the dorsal surface mid line. At times, the hind wings do not have membrane like structures; the region of the mouth exhibits a biting posture; the thorax is highly sensitive; the stage by stage transformation from eggs, to larvae, to pupa and fully developed stage is perfect.

Family: They are a family of flour weevils, many of which are serious pests of stored foodstuffs and fruit crops. The bodies of these insects have a cylindrical shape and the rostrum or snout protrudes. Certain parts of the mouth are made use of by the females for digging; on top of the rostrum, they have antennae, which are elbowed and club shaped; the tarsi is composed of 4 segments. The adult Flour weevils grow to a length of 3 to 4 mm; they are darkish brown in color, nearing black, glossy to look at, with antennae having 8 segments, and a prothorax that is perfectly oblong in shape, with oblong punctures. They lack the hind wings. Fully grown rice weevils, which may be referred to as flour weevils also are about 2 to 3.5 mm in length, with an average length of 2.3mm; approaching black and they have 4 distinct red colored spots each on its ultra: When compared to the Grain weevil, it is less shiny. It has antennae having 8 segments; its prothorax is round in shape, perhaps with irregular or round shaped punctures. It has hind wings. It resembles the Rice weevil, in all its characteristic features, as given above; the only exception being that its length is more, i.e. 3 to-3.5 mm, with an average length of 3 mm. The appearance of the Sitophilus Zeamais (also part of the four weevils) resembles the rice weevil (Sitophilus Oryzae), except that, the spots marked on the wing surfaces are more distinct. Besides, its length is a bit longer and it is capable of flying.

Grain weevils, that also belong generally to the generic name, flour weevils, are found in every warm-temperate and temperate weathers. In the whole world no grain store will be devoid of them. In several places, they are found as a regular pest. They can cause major damage to the post harvest and hoarded grains. They may even severely bring down the yield. The infestation of the yield are a result the regular import of the cereals and the grains, the condition of the storage rooms, the condition of the vehicles and also due to several susceptible merchandise stored alongside. The bags are also a vital source of infestation. These types of flour weevils find shelter in the weaves and seams of not only the bags, but in the vehicles as well.. The temperate conditions there facilitate quick breeding.

Where the temperature is cool or moderate, you may find even more than three generations of them every year. The larvae, as well as the adults are cold-hardy.

Maize and Rice weevils are endemic to the sub-tropical and tropical regions. Breeding of the Maize weevils takes place in the fields where maize is grown; however, breeding of rice weevils takes place only where the grains are stocked. When compared to the Grain weevil, these two varieties of flour weevils are not as cold-hardy. Besides, they normally do not overwinter where the premises is not heated or where the grain is hoarded at ordinary temperatures.

Significant Points on the Grain Weevils

Even though currently, the saw-toothed grain beetles take the limelight, the grain weevils are still a vital pest, found in grain stores in the farms. They are often considered as the main pests of grains, because they can infest grains that are normal. Besides, grain weevils infest many cereal products, like spaghetti and macaroni.

These Weevils Can Cause the Following Damages

Reduction in the weight and quality of grain
This occurs as a result of the larvae that consume the endosperm. Because the germ is assaulted only occasionally, germination may occur, but the seedling become weak, susceptible to infestation by bacteria, molds and many other insects. The larvae, as well as the adults, of these flour weevils, diet on grains.

Heating of the grain
This multiplies the growth of the insects, causing the commodity to become susceptible to mold, caking and germinating. The insects will die if proper temperatures are maintained..
The destruction done to the grains by the flour weevils is identified at once, when you notice the big holes in the grains that form exits for the budding adults.

The Grain weevils prefer to breed only in conditions where the moisture content exceeds 9.5% and where the temperature ranges between 13 to 35 o C. Corresponding to the humidity and temperature, the female lays 2 to 3 eggs a day, totaling around 200 eggs. Every egg is placed in a tiny hole that they have bored within the grain and the hole is sealed using a mucilaginous plug obtained from its saliva. The eggs hatch within 8 to 11 days where the temperature is 18 to 20 degrees C, producing tiny white colored larvae without legs; they feed on the grain endosperm. In tiny grains of rice or wheat, only a single larva develops. However, in big grains like that of Maize, many larvae are produced. The larvae exist totally inside the grain and cannot live freely on their own. They molt 4 times, and pupate inside the grain in about 6 to 8 weeks. It takes another 5 to 16days before this variety of flour weevils emerge as adults. When they face a threat, they will pretend to die, pulling their legs towards their bodies, staying still. When the temperature reaches 15oC and when the temperature within the grain is 11.3%, the complete life-cycle needs 6 months. The life-cycles of the Maize and Rice weevils are similar to the Grain weevils.

By Hygiene/Management
It is imperative to construct strong stores with facility for upholding perfect storage conditions and also provide facilities for easy cleaning. The stores need proper insulation, good ventilation and resistance to dampness. Take care to avoid crevices and cracks; these provide sanctuaries for the insects to harbor. Use pallets for stacking the commodities. Ensure that the stacks are well spaced and do not touch the walls or the ceiling. Facilitate proper ventilation, regular cleaning and frequent inspection. If needed treat them with insecticides. Suitable rotation of the stock is necessary; provision for a single passage of goods along the premises is advisable. It is imperative to ensure that no remains of food are left over there, giving chances for the weevils to breed, and infest new incoming fresh grains. Discard the infested food stuff (if not fumigate them). Maintain the stores spotlessly clean, and clean the farm stores meticulously prior to harvesting. Before transporting the grains to the store, ensure that they are dried, with a moisture content less than 15%, further cooled to a temperature less than 15°C and retained in that condition.

By Insecticidal Control
Other than the normal insecticides used for grain beetles and grain weevils, grain protectants are available for application to grain prior to entry into the store. If perfect storage conditions are maintained, then these Protectants protect the grain for a few months from the infestation of these varieties of flour weevils.