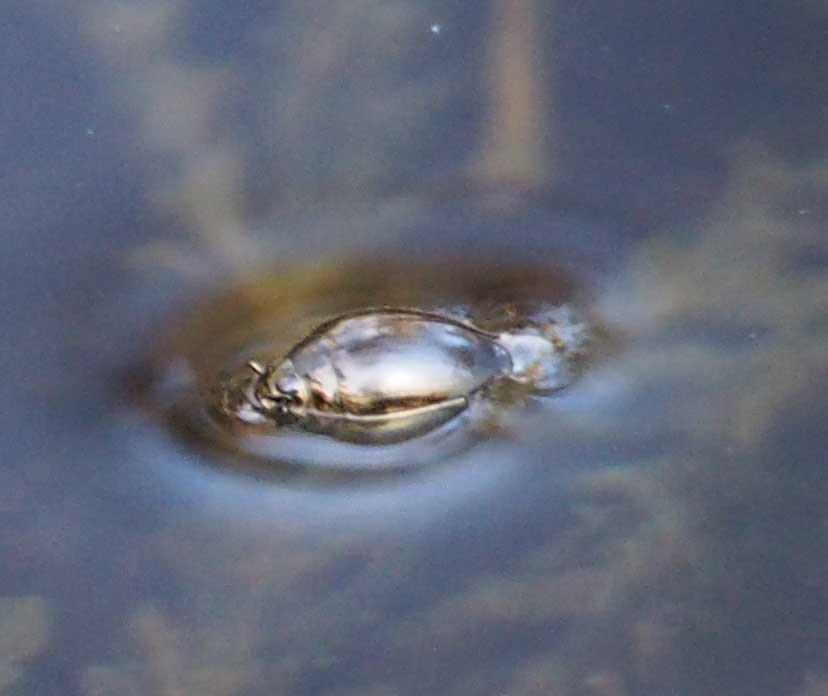 The whirligig beetles scientifically named Gyrinidae is of the water beetle family, This beetle, normally swims on the water surface in an unperturbed manner. However, when they are threatened, they swim vigorously under water. The whirligig beetle acquired its general name because they are habituated to swim in circles swiftly when in a panic. In this family, there are 700 existing species all over the world, in 15 types and some fossil varieties. From their looks, the majority of them are quite alike; however, they differ in size in their length from 3 to 18 mm. When they are viewed from above, the cross section, length wise, appears rounded and flattened in view. Actually, their form is ellipsoid at a glance, keeping their legs and the remaining appendages attachments nearly surface streamlined.

Biologists and researchers have been very keen to learn about a few species, which comes under the status of whirligig beetles, Gyrinidae. These beetles were mainly subjected to detailed observation for scrutinizing their features of Apomorphic Structure (Encyclopedia.com – A novel evolutionary trait that is unique to a particular species and all its descendants and which can be used as a defining character for a species or group in phylogenetic terms), its functions, phylogenetic and distinct taxonomy of numerous whirligig beetles in different regions. Their chemistry, behavior and ecology have been very well covered in a lengthy and extensive literature. The most conspicuous state of Apomorphic character is possessed by the Gyrinids from the beetle family, and their Monophyly (wiki-ancestry) was never in doubt. These beetles are quite popular for their unique lifestyle, which they spend on the streams and pond surface. Their morphological characteristics include the division of their compound eyes, one pair situated on the surface of the head”s dorsal side, which lies above the water, and the other pair on the head”s ventral surface, which lies below the surface of the water. The other feature is their short antennae and a cup-shaped, broad scape, offset.

The whirligig beetles are almost black or perhaps black, and measured 1/8 to 13/8 in (3 to 35 mm). For the purpose of living in water, they are streamed lined and dorsoventrally flattened. Their forelegs which are comparatively long are generally held in the forward direction. Their swift swimming- nature on the surface of the water makes them easily recognized. The larvae is stretched and mostly possess sideways (lateral) protrusions on the abdomen, to a length of 1 inch and they have 4 hooks at the ends or the tip of their abdomen. The wings in this type of beetles develop well, due to which they are able to fly well.
Several aquatic beetles possess similar body forms. The divided eyes of the Gyrinidae are attributes of adults.

You can locate Carrion beetles on vertebrate animals that are dead. You would do well to know that Different species search for varied food like dead carcasses of mammals, birds, and the like, while others look for decaying vegetation, fruit and dung. Some are daytime active, while others are nocturnal, and many of them cannot fly. Those that fly include the bumble-bee. Many are known to be attracted at night to light.

The Whirligig Beetles mainly inhabit the eastern parts of Australia. Out of 1100 different types of whirligig beetles, more than five species inhabit the region of Sydney and above 20 species have been found in Australia.

The Whirligig beetles lay their eggs on the surface of the plants submerged in water. Unlike the adults the larvae are not often seen; they spend most of the time either swimming with twisting movements or crawling. When mature, the larvae creep out of the water and form pupae on the nearby plants. The mature ones go back to the water, and in winter, they move to debris and mud. When spring appears, they come out of hibernation and become hunting groups.

The Whirligig Beetle species are aquatic in nature, and mainly inhabit freshwater.

Whirligig beetles capture and eat the injured or dead insects that float on the surface of the water using their lengthened fore legs. The predator larvae swim and do not crawl. Just similar to most of the predatory dividing beetles, the matured ones fly in search of water.

Whirligig beetles belong to the majority of a peculiar group of beetles on account of their life on and in the water, since their legs are in the shape of flattened paddles and they have divided eyes. When a predator like a bird draws near from above, the beetle dives underneath the water. If a predator like a fish draws near from underneath, the beetle searches for shelter at the edge of the water.

The eggs are laid by the female whirligig beetles out of the water. Normally they lay the eggs on the landing of a water body or even below the water where clumps of water plants are attached. The female beetles lay cylindrical shaped eggs in proper rows, parallel to each other. They usually prefer under-water vegetation habitat to deposit eggs. The eggs hatch in about 2 weeks. When the whirligig larvae come out, they feed on plant parts or on microorganisms found in water. The larval form of this beetle is more narrow and long in shape with fringed gills, situated on every segment of the abdomen, and six true legs. This body structure resembles that of a centipede. While capturing food, the hooks present at the tip of their abdomen anchors to give support. In the pupal stage, the larvae come out of the water to hang inversely on the land vegetation with the help of its hook, after which, it produces a pupal case out of saliva and dirt.

In medical terms, they are harmless, larvae are predatory.; they are beneficial.

The whirligig beetle species are considered to be beneficial bugs, mainly due to its feeding habits. The adult beetles predominantly feed on other dying or dead insects that are found on the pond or lake surface. Hence, theses scavengers are very helpful in keeping the surface of the water bodies clean. The larval form can also be considered as beneficial, as they feed on the insects inhabiting the water.
These beetles prefer to swim on the water surface in a collective group, hence they can control a very high rate of insect found on the water surface in a short time. They can inhabit bogs, ponds, rivers, streams, lakes and swamps. Their quick swimming, and whirling ability on the water surface have gained them the name “Whirligigs”. They are active during the day, and mainly feed at this time. If disturbed, this beetle hides under the water for safety.
Other than their unique swimming behavior, they are also known for two other characteristics. This beetle holds an air bubble near the end of the abdomen, which they carry along with them, especially under the water to breathe the air inside the bubble. This helps them to stay under the water for a long period of time. As the air in the bubble starts to decrease, they replace the old with a new bubble containing more air.
The next unusual feature is the “chemical defense system” used by them, when they feel disturbed or harmed. They release a white milky liquid, which also have a foul smell. This smell is said to protect them from the predators, as most of them do not like this chemical odor. However, The Dineutus Americanusspecies releases the same white liquid, but it has a tempting smell of apples.