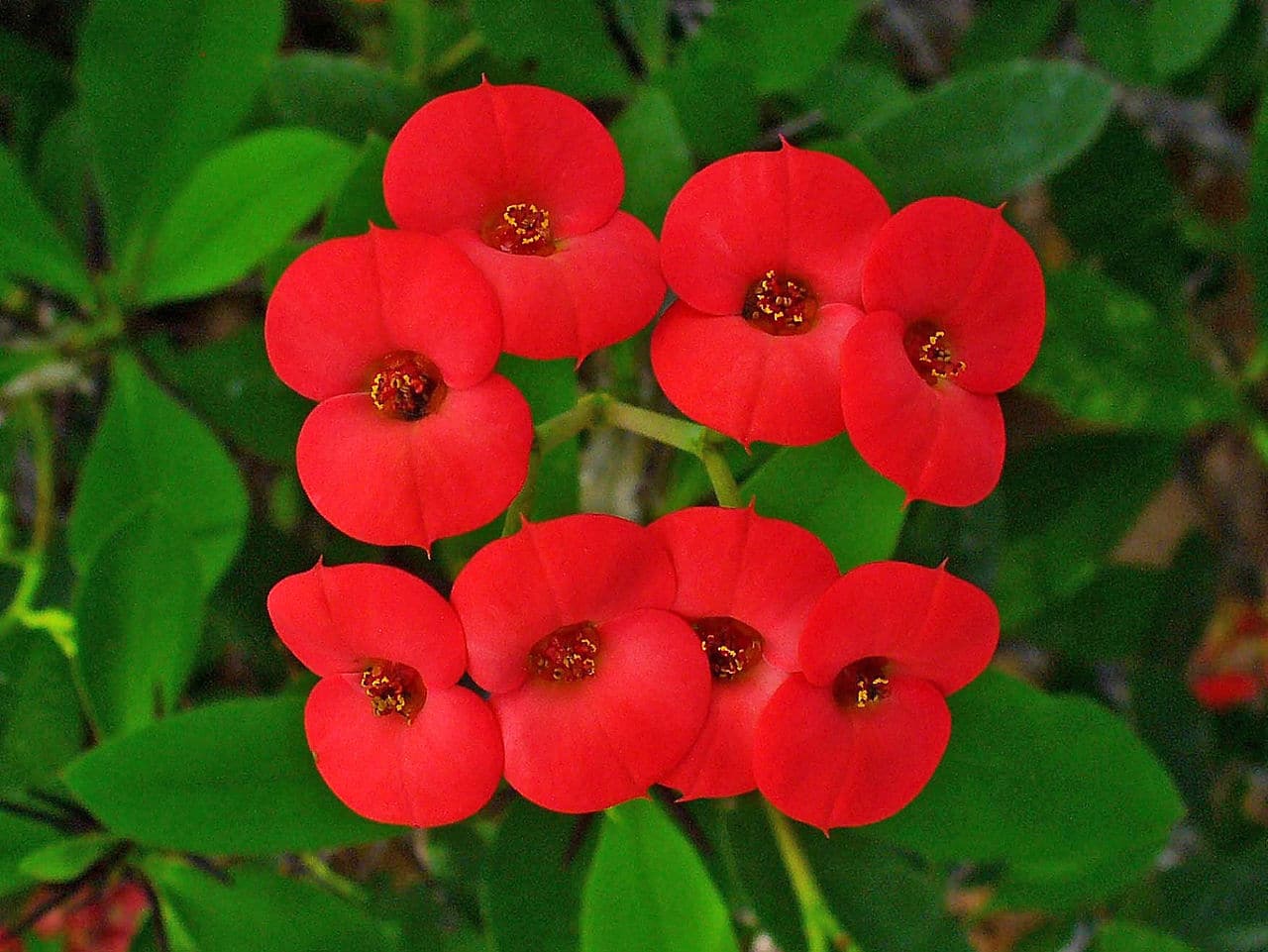 Euphorbia Milii otherwise called Christ Plant, Crown of Thorns and Christ Thorn is a variety of flowering plants belonging to the spurge group called Euphorbiaceae, indigenous to Madagascar. This variety is in commemoration of Baron Milius, the then Governor of Reunion, It was in the year 1821 that he brought known this species in France. There are rumors that in ancient times, this species were brought known in the Middle East. Traditional tales relate this cactus with the crown of thorns which Christ wore.

Euphoria is generally called Crown of thorns. This is one among the 2000 associates of the Euphorbia group, In accordance with the GRIN website named as an APGIII Taxonomic System, this genus, Euphorbia comprises of 528 varieties and subspecies in it.

In the year 1753, the genus called Euphorbia was made known first by Carolus Linnaeus in the premium edition of the species Plantarum, but, in the earlier 79 AD, there are mentions of  its existence in the book,  ‘Natural History of Pliny’ written by Pliny the Elder, a Roman Officer. An African Physician by the name Euphorbus is honored by this generic name, and the variable “Milii” is credited to Baron Milius, the then governor of Reunion for bringing it to France.

This family of plants is considered as “Euphorbs” by the aficionados, and most of the species that have leaves are considered as “spurges” The huge bulk comes from the subtropical and tropical regions of Eastern Africa and Madagascar, however certain plants are seen in The Americas and the tropics of Asia.

This succulent shrub is a climber, grows to a height of 1.8 m (5 ft, 11 in), the spiky stems are densely packed, are thin and erect of length as much as 3 cm, they assist it in scrambling over other plants. Leaves are mainly seen on fresh growths, to lengths of 3.5 cm and breadth of 1.5 cm. They have tiny flowers held by a pair of prominent bracts, like petals with variations of white, pink or red colors of width 12 mm.

Euphorbia milii is a type of plant that blossoms; it belongs to the spurge group Euphorbiaceae, indigenous to Madagascar. The name of this variety, memorialize Baron Milius, the then governor of Reunion, and it was he who brought known this species in France.

The mix of soil used for Euphorbia needs very good drainage; neglecting this leads to rotting of the roots and the plant dies. Besides, the property of retaining moisture in the soil with sufficient nutrient is also an important factor. Use a soil with a composition of one portion of coarse sand, half portion of worm composts or fully decayed cow dung and half portion of coco peat, this retains moisture as well as drains well.

The plant Euphorbia called by the name crown of thorns, has reference to the Christ thorn or Christ plant. This is a relative of the poinsettia, but different in appearance. The branches and stem are enveloped with sharp spikes of length from a quarter to half an inch. This plant is capable of growing to six feet height and ascends on a trellis with ease.

This Euphorbia Milli plant is gorgeous; it brings light to your landscape or home. This plant’s flowers last for a long time and it is not difficult to grow them.

There are no hard and fast rules in the system of watering them. So long as the soil mix is spaced and drains well, watering on a regular basis is tolerated. Just like any other potted plant watering is best, until you notice some water seeping out through the drain holes. Even rotting of this plant is hardly noticed, it is advisable to permit the media to become dry during the watering gap.

This plant is by all means a delicate perennial; even then it tolerates low temperatures successfully. Being totally tropical, it is impossible to make judgments on the least temperature, it is able to withstand, however, the plant grows well all along the winter even if the temperature at night falls down to 10°C. Besides, it blooms and grows where the altitude is as high as 1200 meters and at temperatures of 4°C and even less in the winter. On the elevated temperature side, it can tolerate up to 42°C when the humidity is low during summer.

All said, it seems that Euphorbia Milli does not depend on humidity levels, however, try to avoid too dry a temperature. In Thailand, frequently we see Poysean growing in the midst of water surrounding them in the canals. The sap of this plant is tolerably venomous; it leads to irritation when exposed to the eyes or the skin. In case the same is ingested, it leads to acute pain in the stomach, mouth and throat irritation, nausea because the venom contains 5-Deoxyingenol. Thailand’s Wat Phink” is home to the home to the world’s highest elevation of the Christ plant.

Right from the beginning of spring up to end of fall, when the soil is dry up to  1 inch in depth, almost a finger’s length up to  the first knuckle; water the crown of the thorn plant. Flood the pot with water. Once all the remaining water is drained out, clear the saucer below the pot in order to keep the roots from staying in the water. During winter let the soil to dry up to 2 or 3 inches prior to watering.

Give the plant liquid houseplant fertilizers.  During spring, summer and fall, water the plant, adding fertilizers every fortnight. When winter begins, dilute the strength of the fertilizer to half its strength and add in once a month.

The pests are few and dangerous: they are mealy bugs and scale insects, and once in a while thrips and spider mites.

The Euphorbia Milii are woody and need less care. The acute diseases prevented by ensuring that the soil or leaves do not remain wet. Discard the dead leaves that turn yellow and pierce the spines. They trap moisture and this leads to disease. The diseases are fungal spots on the leaves, bacteria, Rhizoctonia decay of the roots and stem, and Fusarium and also flower blight. In temperate and tropical climates they are, to a certain extent not destructive, when the climate is cold problems related to damping off are likely. When winter begins, permit the plants to more or less get completely dry. Mild watering once in 2 to 3 weeks is enough. Even if the leaves drop, there is no issue.
<