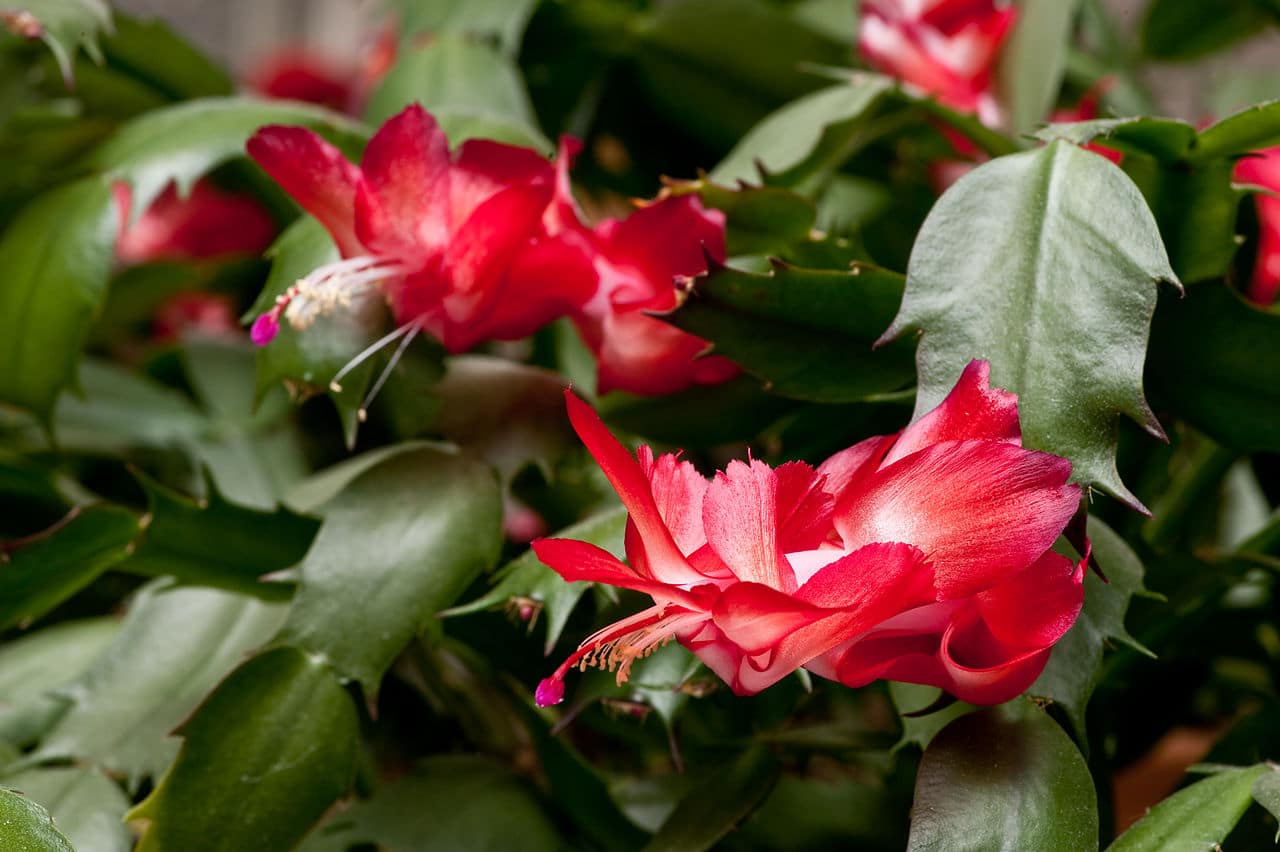 Schlumbergera belongs to a small group of cacti. There are six kinds of them, which are found in the mountainous coasts of the southeastern Brazil.  These plants inhabit rocks or trees that normally provide shade, and where the humidity is great, there is a good possibility that they look very different from their counterparts that inhabit the deserts. This genus is included in the cultivars of Schlumbergera, a well known cactus, also known as Thanksgiving cactus, Christmas cactus, Holiday Cactus and Crab Cactus. The flowers are of colors pink, white, orange, yellow, purple and red. (The Whitsun Cactus or Easter cactus, otherwise named Holiday Cactus has blossoms that are brilliant scarlet in color, in those that are generally home grown, and these are presently under the genus Hatiora).  There are two major groups that come under the Schlumbergera cultivars.

The Truncata Group originates mainly from the variety of S. Truncate as it possesses the entire cultivars along with all its characteristics. The section of the stem has sharp teeth; the flowers are slightly drooping and are positioned normally in the horizontal direction, with the top portion having a different shape from those of  the bottom portion (Zygomorphic). Their pollen grains are yellow in color. These plants bloom prior to the individuals of the Buckley Family, and even though their general names are not used always, perhaps they are differentiated as Claw Cactus, Crab Cactus or Thanksgiving cactus.

The Buckley  Group possesses all the cultivars along with some characteristics with obvious traits of S. Russelliana: their stem sections are round, with teeth that are more regular; their blossoms droop down lower than the horizontal level and are almost regular,  or balanced; their pollen grains are pink in color. Normally these bear flowers after the individuals of the Truncata Family and are more probably labeled as Christmas cactus.

In the year 1858 Charles Lemaire fashioned the present genus of Schlumbergera. This name memorializes Frederic Schlumberger, who had a gathering of cacti at his estate close to Rouen. In the year 1890, Karl Moritz Schumann generated a new variety Zygocactus, he transformed Zygocactus Truncates into Epiphyllum Truncatum.

In their natural habitat this variety of Schlumbergera grows on rocks (Epilithic) or on trees (Epiphytic). In addition they develop ample woody based shrubs. As per records, a variety of S. Opuntioides grow up to 1.2 m (4 ft) tall.. Since they have no leaves, their stems that are green act as the organs of photosynthesis. The stems of these plants are made up of sections which appear in one or two shapes. The majority of the varieties of Schlumbergera grow with stems that appear like leaf pads joined together; their flowers shoot from areolas which are the union of the stem and tips. Two of the varieties possess stems that are cylindrical in shape resembling other cacti. In Brazil they consider this genus May flower; and it is botanically called Flor de Maio; this has reference to the period of blossoming in the Southern Hemisphere.

The Christmas cactus is actually a cactus; however, it characteristically does not look like cacti of the desert regions.  The reason is that, in their natural habitat, they grow on trees.  When this plant receives continuous sunlight of above 12 – 14 hours, it blooms, for it is a day plant that is short in size.

Schlumbergera plant, namely the Easter cactus, is a variety named Hatiora, and these are the inhabitants of apparently cool regions of the mountain rain forests of Southeast regions of Brazil.

Soil
Ensure that the substrate has minerals and is porous; the normal mixture used for cacti is well suited. You can opt for the usual potting mix, which apparently sustains water for long periods. The soil is made porous when granules of clay are added to the soil.

Planting
It is effortless to propagate the Christmas cacti. Cut a Y-shaped section of the end of the stem.  Ensure that you take the cutting from the foliage of the plant that is disease free.  In a soil that is somewhat sandy, plant the section deep in the soil to more or less one fourth of its length.  Wet the soil uniformly and keep the cutting in a location where it receives proper light, Keep it away from straight sunshine.

For the cuttings from the root, for new plants, snip off the shoots from their ends; for every end snip at the second union.  The cuttings should exhibit signs of growth in a few  weeks, during which time,  shift the plant to a different pot, in case you wish, in a loose mixture of potting soil with sand, loam and compost.

Watering
The schedule of watering depends on several aspects, such as substrate, temperature, and size of your plant in comparison to the pot.

Water my plants abundantly from spring to autumn.  The Christmas cactus is capable of holding much water as the soil can hold. Remove extra water that seeps out in the saucer after some time, because standing water decays the roots. Apparently wait for the substrate to dry up prior to the next watering.

To know if water is required, monitor the weight of the pot, since dry soil is lighter than wet soil.

Temperature
Following the blossoming of the plant, it need to rest. Water your plant infrequently from the end of January to the end of March in order to maintain the dampness in the compost and ensure that the soil does not dry fully. Also minimize the temperature level to 12 to 15°F (55 to 59°F). This is possible through effortlessly shifting it to a room that is cool.
The plant grows from April to September, therefore, maximize your watering and provide your plants with the liquid feed suitable for houseplants. At the time of its growth regularize the temperature to 18 to 20°C (65 to 69°F) if feasible.

Humidity
In case you reside in a place where the atmosphere is dry, then, supply humid conditions to your plant by providing a tray with water near your plant and when the water evaporates it gets humid.  Otherwise, create a moisture tray by keeping your growing pot in a plate that is waterproof by filling it with gravel and filling half of the plate with water.

Ultimately, aim for a humidity of 50 to 60%.. In case your environment somewhat complies with these figures, you will be OK.

Care
The Christmas cactus flourishes well in places where it receives bright sunshine throughout the year for sometime in the morning and evening. During winter, it adjusts with the available sunshine. In summer, avoid placing your plant under the noon sun. Then, you can place the pot 50 cm behind the window. During the summer season, it is possible for you to keep the plant in a place on your balcony or in your garden where it is shielded from noon sun or rain. Make it accustomed to getting direct sunlight and not filtered sunlight through the window.

Pests and Diseases
Among growing crops, these plants are considered as “outstandingly disease free and pest free”. The two noteworthy insect pests are the root mealy bugs that eat the plant from under the soil and the aphids that attack tender shoots, flowers and buds. Disease on account of the fungi and similar organisms are likely to decay the roots and stems; these are from the infectious varieties such as Fusarium, which is fungus Phytophthora, and Pythium, both of which are water molds. If the plant is attacked by any of these diseases, treat them with approved chemicals. Viruses are spread through the invertebrate insects such as mealy bugs, aphids and the like. Signs of the disease vary with the variety; the vitality of the plant is lost. The virus, namely Cactus virus X is secluded from the species S. Truncate.  The affected cannot escape damage since treatment of these virus diseases is not known.