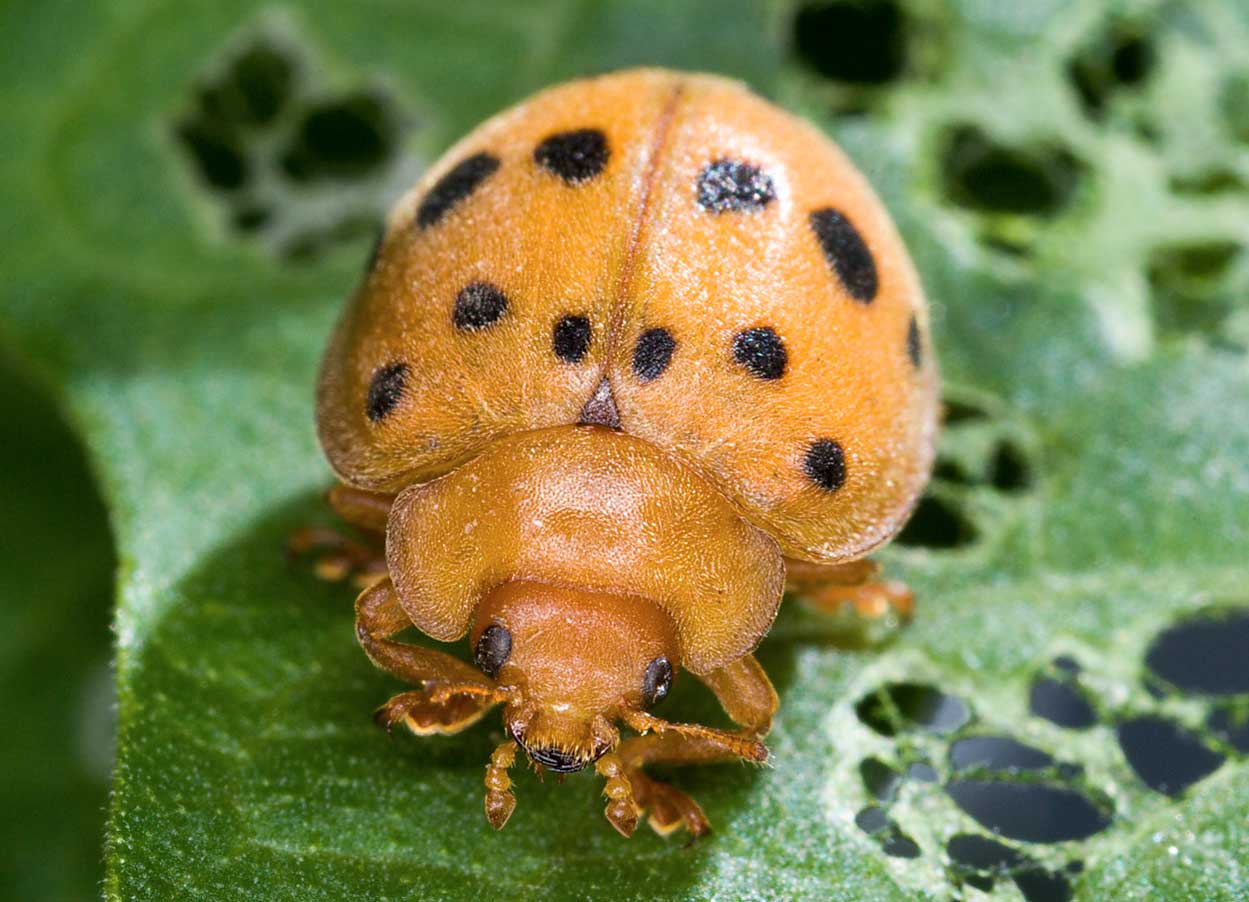 TheMexican Bean Beetle, scientifically named as Epilachna Varivestis, belongs to the lady beetle variety, that is known as an agricultural pest. These beetles are among some of the lady beetles that are better known as plant pests than feeding on other insects. We find them all over the Eastern regions of the United States. And Mexico. You can find a lot of them in the Rocky mountain”s western locations which are highly irrigated and remain wet,. It cannot adjust to locations that are very dry.
The diet of the Mexican bean beetles consists of beans, legumes and the like. We find them in most of the types of types of bean plants; This Includes The Common Types Like The Phaseoulus Vulgaris, Azuki, Cowpea and Mung Bean (Vigna Spp), Lime Bean (Phaseolus Lunatus) And Soya Bean (Glycine Max). Apart from this, it also attacks several legumes like different types of clovers (Trifolium Spp) and Medicago Sativa (Alfalfa) Even though the matured beetles have an appetite for the leaves, they also eat the plant flowers and the fruits.. They consume the gentle Parenchyma contained beneath the leaf, without destroying the top epidermis, which creates a lacy “skeleton-like look” for the leaves. The larvae, by eating them, damage the leaves in excess of what the adults do..

The color of the Mexican matured bean beetles is brown with yellow tint and copper color; they are oval in shape, having 6 black spots oriented in three rows diagonal to their wing cover and they are ¼ in (6mm) in length. In appearance, they are like lady beetles (these are useful insects, do not kill them). Therefore have a close look to identify the larvae. The larvae are fat and yellow to orange in color measuring 1/3 inch (8mm) in length. They do not have legs; instead, they are long branching spines in 6 rows jutting out of their segments. The eggs are oval in shape and yellow in color.

When the warm weather shows up, the adult beetles appear from their hideouts where they stay in winter beneath the leaves and brushes. Certain beetles stay for a longer period till the middle of summer. Towards the middle of May, the adults proceed to look out for lima and snap beans” However, towards the end of June, they start Ovipositing in soya beans. They feed on the tender little bean plants for a period of 1 to 2 weeks and then the females lay 500 to 600 eggs in lots of 40 to 75 at the bottom of the leaves. The eggs are glued to the ends of the leaves, perfectly, in the vertical manner. In a week”s time they get hatched when the weather is warm and further they need a minimum of 2 weeks when the weather is cool.

In the same way that the Japanese beetle damage the foliage throughout the garden, these Mexican bean beetles, too, are seen in the United States, destroying the leaves with the skeleton left alone. The Mexican bean beetles are next of kin to the ladybug, and have a strong resemblance. They are tiny, of a length of almost a ¼ inch, their body is colored tan-yellow with 16 black spots on them. Never let them mislead you; even though they have an affinity to beans, there is a possibility for them to harm your beet, pea, tomato and squash crop as well

The female Mexican bean beetle lays their eggs in batches of yellow and orange colors underneath the plant leaves.

The Mexican bean beetle is the biggest of the notorious insect pests of beans in the Eastern regions of the United States towards the southwest regions. The adult as well as the larvae eat the bottom part of the leaves and occasionally harm the stems and the pods too resulting in the veins remaining on the leaf which looks like a lace.