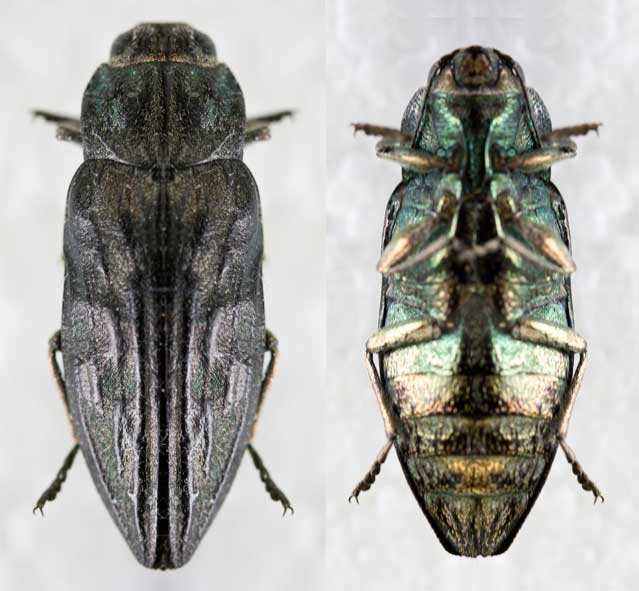 Other Names: Spiny Wood Borer Beetle, Ponderous Pine Borer…Beetle, Spine-Necked
Alternative names include the Wood Borer Beetle (Spiny type) Borer Beetle (Ponderous Pine type), Longhorn Beetle (With a Spine-Neck).
The long horned variety of wood borers of the genus Monochamus come under many species, their method of attacking and breeding are found in diverse coniferous forests. The larvae of the round headed wood borers are generally called pine sawyers beetle or just sawyers. The larvae are portrayed as sawyer, because they often produce a sound in the process of feeding. The larvae and their adults are generally linked to or rather infest newly cut stressed, felled, recently dead or dying trees. The juvenile larvae”s food consists of cambium, inner bark and outer sapwood, which generate superficial dig outs called surface galleries. These surface galleries are topped with borings of coarse fibrous frass and saw dust. In the process of their growth, as they turn older, they enlarge after every larvae molt, they begin to bore in the reverse order to the surface and form a tunnel in the shape of a U. Following the end stage of growth as larvae, they generate a pupal cell adjacent to the exterior of the wood towards the terminal of the tunnel. Following pupation, the adult comes out of the wood, by gnawing the leftover wood and bark, creating a hole. Pine wood nematodes called pine wilt disease lead to the death and decline of several pines all over Oklahoma and most of the U.S. The disease is exceptionally complicated, because of its involvement with a nematode that is plant-parasitic, wood staining fungi one or more insect vectors (primarily called pine sawyers) and perhaps several other organisms.

The characteristics of the Adult beetles (pine sawyer) are: hard shell, cylindrical shaped and at times possessing bands colored contrastingly, with stripes and spots. The general term in which adult pine sawyers are referred to is longhorn beetles, since they have antennae”s of length to a minimum of half its body. In certain varieties, it is about 1 ½ times its body length. When at its larvae stage, the beetles do not have legs. Besides, they are whitish yellow in color, with round shaped body and are plump..

We find the beetles in the forests of coniferous trees at a height of 1,200 m. The preferred habitats are Douglas Firs and Pine trees. During dusk, they are active. We see the adults flying about the lights or walking about on stumps or logs. In the pronotum (or shoulder portion), there are spines, and the texture of their wings is in the form of an armor.
It is reported that this bug is seen in these regions:
Hereford, Arizona
Florence, Arizona
Cathedral City, California
Surprise, Arizona
East Shore, California

Pine sawyer beetle belongs to the secondary type of invaders. The female pine sawyers lay their fertilized eggs inside the bark of the decaying or dead stumps, trees and logs. Once the larvae is hatched, they proceed by boring through the dead wood and feed on the sap within the wood and also the heart wood that is at the center. During summer, they come out as adults and set back their tunnels and the hole, in the shape of a capsule at the exit. As such, during the warm seasons, we see adult beetles emerging and larvae feeding, all the year after. In midsummer, the beetles complete a life cycle in 50 to 60 days from the egg stage, right up to the emerging of the adult beetle. Most of the emerging adults become agile from May right through the end of September. But because the emergence is staggered, at this time, we see all the stages in the life cycle in summer. Also in the warm seasons of winter, a few adults emerge. As such, controlling them to a certain extent is possible or you could limit the spread of these beetles (Pine sawyer) through pesticides. The dual behavior of the emerging adults includes feeding on the bark and visiting pines that are healthy and also paying a visit to dying/stressed trees and mating, feeding and laying eggs in tiny holes created by the female by chewing through the bark.

Other than these, the other varieties are: The spotted pine sawyer is a large beetle, colored black, fading to brown with a gray hue, possessing white marks. They come in lengths varying from 14 to 24 mm, and occur in various forms and different markings. A few are mostly gray whereas the others are perhaps brown with markings that are that are not distinct or faded. The length of the body of the white spotted sawyer (or M. Scutellatus) is more or less the same, ranging from 16 to 23 mm. The normal colors are deep gray to black with clearly distinct white spots in the middle of the body, below the cover of the wing. Some more marks are present at the wing”s cover, quite different from the others.

The antennae of the adult pine sawyer beetle are very long; it stretches from 1 to 3 times its body length. Sexually, there is a wide difference in their appearance; this is visible from the length of their antennae, and the male antennae are longer. The body of the female is bigger and their posterior legs are comparatively shorter than the males.

The larvae bore through the Heartwood and sapwood of the dying trees and trees that have undergone recent felling. A distinctive round headed borer has elongated larvae that are segmented, grubs without legs. They have brown colored heads and are approximately 20 to 25 mm long when fully grown. In the aged larvae the parts of the mouth are projected in the downward direction. The Japanese sawyer beetles, otherwise called Japanese pine sawyer belongs to the longhorn beetles (Monochamus) that infest the Pine, they attack the trees that are sick or recently felled. There are records that they attack several varieties of pine, and also certain varieties of fir, spruce, larch and cedar.

These Japanese sawyer beetles inhabit Japan; however there are records of noticing them in Taiwan, China, Vietnam, Korea and Laos.

Similar to the many longhorn beetles, the peculiarity of the Japanese sawyer beetle is that their antennae have more length than their body. The length of the adult beetle is 15 to 30 mm and width of 4 to 10 mm. The color of the adult is mottled orange with a brown tint and characterizes stripes throughout its body length. The color of the larvae is white and its length is 43 mm. Its eggs are in curve shape, and of length 4 mm.

Following the emergence of the Japanese sawyer, it lives on leaves and fulfills its maturation. This goes on for nearly a week for the males and a female lays eggs in about 3 weeks. The female chews and makes a wound in the bark for laying one egg in a wound made by it. The majority of adults fly to heights below 200 meters; however, statistics report that data is available where adults fly even up to 3 Km.

A White spotted pine sawyer is discriminated from an Asian Long horned beetle by the position of its shoulder blade beneath the neck, which possesses round whirs/dots, which is the indication of a harmless beetle. These dots are exceptionally on the sawyer beetles

You find these White spotted pine sawyer beetles throughout the North East of the US. They like the spruce and pine trees. They are a favorite of the woodpeckers.

The right control over them is prevention. This is done by keeping away the logs from exposure in the months of July to September, which is the time for them to lay their eggs. In case a log is infested, process them in time.

Pine wilt is a spectacular disease, since it normally kills an affected tree in a week”s time or in a couple of months. The pine wood nematode, scientifically named Bursaphelenchus Xylophilus, is microscopic, leading to the death of the tree. The majority of the plant-parasitic nematodes are related to plant roots; however, the pine wood nematode is seen on the parts of the tree that is above the ground. The tree is killed by these nematodes by feeding on the cells that surround the resin ducts, whereby the resin oozes out into the tracheas, causing “Tracheas Cavitations” or air holes in the system, by which water is transported to the plant, in the same way that makes it difficult for a person to use a straw having perforations in it. Since it is not possible for a tree to transport water in the upward direction it will droop and die. Pine sawyer beetles scientifically named Monochamus spp, vectors the nematodes. The nematodes in turn catch a ride along the beetles and get transported from tree to tree in the process that the beetles employ to feed on tender shoots of the pine tree.

Stands of one variety of tree (otherwise called monocultures), offers a very good site for the breeding of the insects and connected nematodes as they are more prone on approaching the age of 10 years.

It is imperative that the owners of the home, discard the dead trees and those dead trees lying in public places.

Cultural practices: Discarding the trees having symptoms of drooping is done in the US, which is the ideal way of wilt-management. Adult beetles have an affinity towards the freshly dead of drying trees or recently felled trees. From spring to fall, the adult beetles fly from the dying trees to the healthy ones; hence, the disease is not spread from tree after tree in winter season. The emergence of the beetles varies during the season when they are growing, which depends on the temperature, extending from spring to fall. As such, trees get infected till winter approaches. Bury or burn the dead trees at the earliest. It is imperative that you discard the tree stumps as well, since they attract the sawyer beetles

Chemical control: Insecticides and Nematicide cure for trees in the US are not practical, because it is not effective and rather too costly. In Japan, the disease is more shocking, leading to investigations on induced resistance with the use of a less dangerous strain of Bursaphelenchus, biological control and Nematicide cure.

The ideal method of getting rid of the damage caused by the Pine sawyer beetle is by harvesting in the month of September to the beginning of June and completing full processing by the end of July. But harvesting is possible in the summer with less harm from the damage of beetles in case the logs are processed in a week or two.