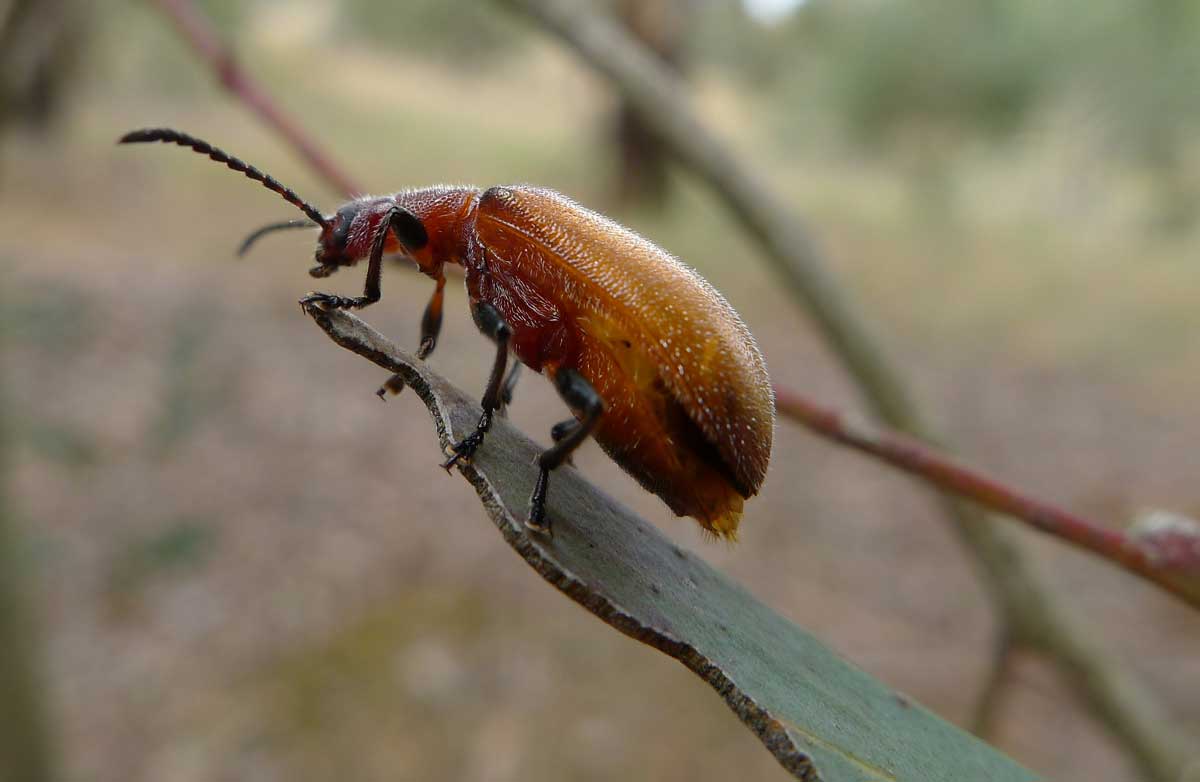 You can classify Wood Boring beetles in the following manner.

Bark Beetle
Bark Beetles that belong to the Scolytidae family are small insects that attain a length of 1/8-¼ of an inch. They can be mainly found in a reddish brown or black shade. Commonly found in the any landscape, this beetle can be present in different types of wood used in our households.

Bark beetles consist of 6000 species from 220 genera. Before, the Scolytidae family was considered to be distinct, but further studies revealed that these beetles belongs to the specialized family of “true weevil”, (Curculionidae). Members belonging to the Scolytus genus are quite well-known, like the large elm bark beetle, biologically known as S. Scolytus, and the European Elm Bark Beetle, which is biologically known as S. Multistriatus.

Similar to the above species is the Ips Typographu, which is commonly found in Europe and is generally known as an Aggressive Bark Beetle. Another small bark beetle called Hypothenemus Hampei, commonly known as the Coffee-Berry Borer, can also be considered as a serious pest on the plantations of coffee, all around the world.

Other than the bark beetle species, two other groups of beetles prefer woody plants to nurture their offspring, namely the Buprestidae and the Cerambycidae. The adult Buprestidae is commonly known as metallic wood borers, and its larval form is referred to as flat-headed wood borer, whereas the adult Cerambycidae is termed as long-horned beetles, and its larval form is known as round-headed wood borers. Both these families of wood-boring beetles consist of some species that uses conifers as their host plants, whereas the others prefer the broad leaf plants and trees. Most species of these families attack living but degrading or stressed trees, and some also completely depend on dead plants and trees. The Buprestidaeconsist of beetles that are commonly termed as or jewel beetles, or FlatHeadedBorers. They possess a glossy iridescent body color and the shape is usually elongated or cylindrical, and ranges between 3 to 80 mm in length. Very rarely do species attain a length of 80mm; most fall under 20mm An adult Emerald Ash Borer on a penny

The larval form of this beetle prefers to bore through logs, roots, leaves and stems of different plants and trees. They prefer to host on degraded or dead branches of healthy and living trees, but few species also prefer green wood. These families consist of some species that are considered as a major pest, capable of killing healthy trees and causing tremendous loss. One such example is the emerald ash borer. Cerambycoid beetle group include the big beetle family Cerambycidae, along with other three small families, namely Vesperidae, Disteniidae and Oxypeltidae. These families collectively form an economically important as well as a charismatic beetle group that consist of more than 4,000 genera and above 35,000 identified species. The beetles belonging to the Cerambycidae family are commonly termed as timber or longhorn beetles. They possess long antennae, which they mainly use to search pheromones.

The larval form of long horn beetle mainly eats the decaying or dead wood, while some species also prefer eating the live plant tissue, which may cause tremendous economic loss. The adults of these beetles basically have a nocturnal behavior. The Nethinius species of this family are usually found eating plants near their habitat. Some specimens of this beetle show antennae and mutilated legs that suggest the presence of aggressive beetles and the existence of infra-specific lights in females. The larval from of this beetle are generally xylophagous that attack the roots or wood of broad-leaf plants and trees. The Oxypeltidae family is a small group belonging to the Chrysomeloidea Superfamily. This beetle is commonly found in the Argentina”s and Chile”s Andean regions. The larval form of this beetle are typical xylophagous that attack the plants and trees of Nothofagus genus, present in the Southern Hemisphere. The adult beetles are considered as diurnal, and prefer rearing on the leaves. The Vesperidae family is again a small group of beetles that belongs to the Cerambycidae family. The larval stages of this beetle are related to the roots of trees and plants from the herbaceous family. Weevils belonging to the Curculionidae family are actually termed as “true weevils” or snout beetles that are easily distinguishable by their beak-like antennae on their head. Basically, they are small insects that attain a size of 1/16 to 3/8 inch. These dark colored beetles mainly feed on nuts, seeds or wood. The larval form of this beetle is legless with a white colored bodies that are commonly seen in the nuts and seeds brought for household purpose.

General
Wood Boring beetles represent a group that comprises several species form different families whose adult and larval forms predominantly feed on wood, hence termed as wood borers. The larval stage of this beetle is known as wood worms, specifically in the woodworking industry. The three main families belonging to the group of Wood Boring beetles are bark beetles, longhorn beetles, belonging to the Cerambycidae family and metallic flat-headed borers belong to the Buprestidae family.

These beetles mainly attack the dead or dying trees. It is considered beneficial in the setting of the forest, as it destroys the weak trees and thereby allows new growth. It is also a renowned tree decomposer in the forest system that allows the nutrients locked in the decayed tree to recycle. Though most of them are important ecologically, some may turn into economic pests by causing damage to the healthy trees too. Specifically, such beetles are Asian longhorn beetles and Emerald ash borer that may also bore the strong parts of a healthy tree.

Another Method of Classification of Wood Boring Beetles

The wood boring beetles can be also be classified into three groups, namely:

They turn serious pests, when they attack the wooden furniture of houses and buildings. The larval form causes the most destruction by feeding on the wood, and as it transforms into an adult beetle, it creates holes through which it emerges and exits. The other species like bark beetle, flat-headed or ambrosia beetles are more prone to forest areas. They are very rarely seen in the premise or inside the house, but can enter through the infested firewood used for burning at home. This is a subfamily belonging to the beetle family Bostrichidae where the beetles are commonly referred as Powderpost beetles. This name is acquired because, the larvae of this beetle make fine powdered frass, which is a mixture of wood fragments and its own feces. This fine powder has a consistency of talcum or baking powder. This mixture is seen filling the feeding channel of this beetle, which sometimes can be seen on the ground or the nearby places.

This expelling of fine dust from their feeding channel distinguishes them from the other wood boring species.

This beetle prefers to attack different types of hardwood trees. These tree woods already have pores, where they tend to lay eggs. They rarely attack the soft wood trees as they lack such pores in the wood. The other host preferred by them is the bamboos, which also consists of larger pores. They also select the woods with high content of starch. This is also the reason why they do not select the soft wood trees, as the starch content in soft wood trees is very minimal. They will inhabit and feed on dry woods that have less than 8% moisture content.

They prefer to lay eggs in the wood of trees like ash, mahogany, oak, walnut and hickory. The infestation caused by this species can be seen on the wood flooring, paneling, door frames, windows, moldings, furniture and plywood articles.

The identification of infestation is the small round holes for exit created by the newly emerged adult beetles. Once they mature and start to fly, then they will migrate to the other parts of the wood surface, searching for unfinished surface or cracks to lay eggs. They also seem to be attracted towards light; hence the adult beetles can be seen on the window sills or near the bulbs inside your house.

The life cycle of this beetle extends from 3 months to 1 year and above, which depends on certain environmental factors like humidity, temperature, and the nutritional content in the wood. Most of them have red to brown shade. The Woodborer beetles belonging to the Anobiidae family are commonly referred as Deathwatch beetles. They are the closest relatives of Cigarette and Drugstore Beetles that you encounter in store products. The adult species are able to communicate among themselves, and the method to locate their mates is quite unique, which is done by hitting their head on the surface of the wood especially at night. This name was acquired during the middle age, when the European people used to hear the tapping sound at night.

These beetles also prefer softwood trees, especially the species Douglas-fir that is used to make beams, furniture, girders, and foundation timbers. They can also be encountered in decayed or old wood. They inhabit in wood that have more than 14% of moisture content, unlike the Powderpost beetle”s preference. Hence, it is assumed that the houses or building with central air conditioning or heating are less likely to be a habitat for this beetle. They can be commonly encountered in damp areas and marshy places.

The larvae of this beetle stuff their feeding galleries in the wood with fine frass pellets that has a grittier consistency. This frass is not visible unless the larvae pushes it from the emergence hole. Holes made by the Deathwatch beetles are found in different size, whereas the holes made by the other two categories seem to be of the same size.

The adult Deathwatch beetles are dark brown to red in color, and they deposit their eggs in small openings, crevices or pores found in the unfinished wood. The life cycle of this beetle extends up to minimum 2 years. The Deathwatch species frequently seen in California is the Hemiccoelus gibbicolis, the Pacific Deathwatch beetle. The False Powderpost beetles belong to the Bostrichidae family, and are basically wood-borers. They can be seen inhabiting in both softwood as well as hardwood. This species often reaches the United States, mainly on the bamboo articles or on Philippine mahogany

Unlike the beetles of the other two families, this beetle deposits egg in the egg gallery or tunnel bored by this beetle on the wood or other wooden articles. The larval form fills the feeding gallery with frass powder that has a coarse texture.

They mainly infest furniture, wooden floors, hardwood paneling and other wooden articles. Some species also bore into soft metals like silver and lead; hence they acquired the name “leadcable borer”.

They prefer to attack wine-soaked oak present in the wine barrels or the alcohol specimen”s corks. Hence, it is also termed as “cask borer”

The adult False Powderpost beetle is black or dark brown in color, and has reddish legs, mouthpart and antennae. They attain around 1/4th of an inch length. The body of this beetle looks like having a humpback, due to which its head is not visible, when viewed from above.

The duration of this beetle”s lifecycle is very different. Most species take around one year, but some rare species also take around 20 years to complete.

Controlling this pest is not simple, as they are present in various types of woods. It can only be controlled by preventing its entry to the house. Take care while using the firewood, as it may consist of this beetle. Hence, you can leave such woodpeices in the garage or unheated shed, completely outside your house. Bring only a small amount of wood piece inside the house, which is needed to burn, so that before it knows, it will be burnt. Make use of kiln-dried type of lumber, and avoid using insecticides over the lumber or logs for controlling this insect.