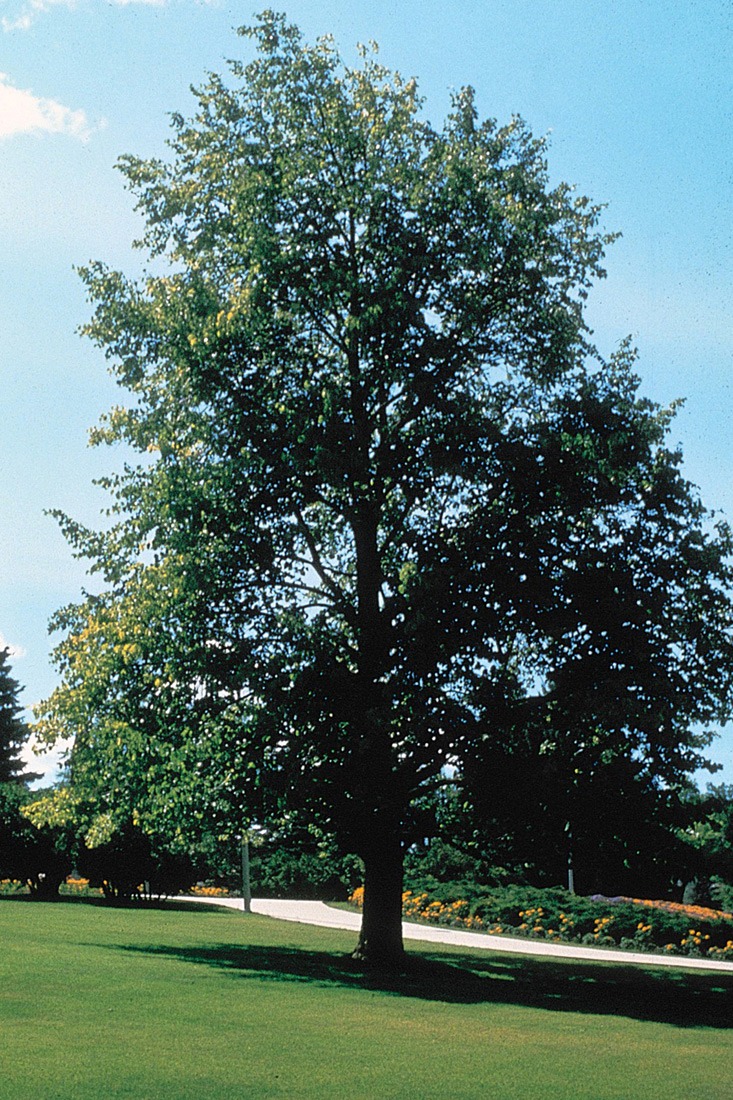 The leaves of American basswood are heart shaped, broad, flat, alternately arranged, simple, unequal at the base and cordate to ovate and the flowers are small, yellowish-white fragrant and are arranged in drooping arrangement. The wood of American basswood is odorless and light weight. American basswood has small, creamy and perfect flowers which open in the early summer season. Its flowers are favorites of bees for the making of honey. These flowers mature into rounded fruits, which ripen in the late summer season. In autumn season the fruits are eaten by wildlife. The leaves of the tree are fine, have double teeth and all teeth are about the same size. The leaves of the basswood tree provide nutritional inputs to the soil of the forest. These leaves contain important nutrients like potassium, magnesium, nitrogen and calcium. These nutrients are not withdrawn from the leaves in the fall, when the leaves decompose these nutrients are released to the soil. They become again available to the vegetation.

American basswood has a habit of growing in rings or clumps with more than dozen trunks right next to each other. It ranges from New England west in Quebec to southwestern New Brunswick. Basswood habitat includes bottom land, mesic upland and sandy woodlands. With sugar maple, it is co-dominant sometimes. American basswood has poor resistance to fire because of its thin bark. Tilia Heterophylla is another species which is native to southern Illinois. Tilia Heterophylla is similar to American Basswood. The American basswood can reach up to 130 feet height in the eastern states that has rich soil and more rainfall.

The wood of American basswood is used in hard carving. The inner bark of the tree is used for weaving items like mats and baskets and also used as fiber for making rope. The light weighted wood of American basswood is used in the making of toys of children, the body of an electric guitar, paper pulp and light weight furniture. A very good quality honey is also made from the nectar of its flower. When the leaves of basswood are tender and young, they are used in making of green salads in early spring and summer season. After the buds open, they are best. This time the flavor is very sweet. These leaves are also used in the making of sandwiches and cooking dishes. Basswood tree has good commercial uses as well. American basswood can grow in full sunlight. It grows well in drained, deep, rich, fertile and moist soil and is adaptable in different soil conditions. It is found on rocky slopes. It grows mainly in mountain areas, where it is a valuable timber tree. Annual fertilizing is not needed for basswood trees. That is why it is a suitable tree for public parks and gardens.

Linden borer, aphids and Japanese beetles, are some of the insects that cause problems to the American basswood. It attracts blue jays and birds. These birds use the basswood tree as shelter. American basswood is also harmed by infestations of aphids. It secretes honeydew and can cause mold fungus. By avoiding over fertilizing and over-watering, aphids can be discouraged. A bacterial or fungal disease affects the leaves and flowers of basswood tree. Severe pruning and avoiding overfeeding help in preventing these diseases. Basswood tree attracts insects, but these insects damage the tree temporary. Gypsy moth is another problem for the basswood tree. Heavy diseases and infestations can be treated by spraying of horticultural oil and insecticidal soap.

The American basswood tree needs weekly watering. It keeps tree neither wet nor dry. From the first two or three months of planting basswood requires water twice in a week. Mulch helps the soil to retain moisture. When mulch breaks down, it adds nutrients to the soil.

Once established, these trees require little care. This tree is attractive, beautiful and elegant. It can tolerate adverse climate conditions, even pollution. The basswood tree requires full to partial sunlight.

A fast growing popular, long living tree, it is ideal for landscaping and for planting along streets. Bees make a high quality honey from the flower. The fruit is eaten by rodents and birds. For its wood American basswood is prized. In the past it has been carved into picture frames.

The Basswood tree is also used in the treatment of cold, flu and sore throat. The inner bark is used by Native Americans in the treatment of snakebites and dysentery. The twigs and inner bark are also used during pregnancy for bowels and weak stomachs. Leaves are used in the making of eye wash and poultices. In the forest, preservation of this tree plays a very important role. The fruit of basswood tree is a woody and round. The size of the fruit is that of a pea and it can be single or can be in a cluster. It is an excellent fruit substitute for chocolate. Linden or basswood tree played a very important role in Roman and Greek mythology. The tree was used as a symbol of fidelity and love according to Roman mythology. Older basswood trees provide comfortable shelter for birds and squirrels. When it is 15 years old, it starts producing seeds.