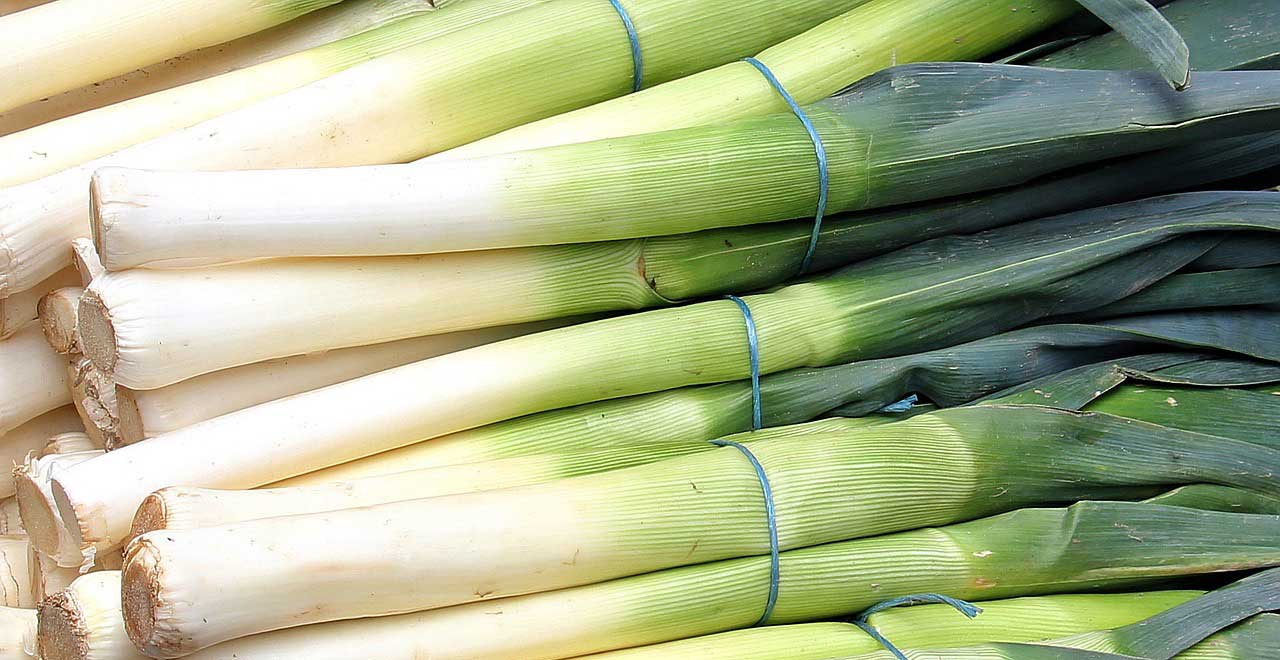 Vegetables site has articles on Leeks.

Being a part of the Allium family, like onion, garlic, shallots or scallions,  leeks  fall under the category of Amaryllidaceae and sub-category of Allioideae. Along with elephant garlic or Kurrat, leeks belong to the family Allium ampeloprasum.

The original homeland of leek is Central Asia and Europe. Romans and Greeks largely appreciated it for its unparalleled effect on throats. Ample amount of water and nitrogen content of soil facilitates leek cultivation. Enrich the soil using organic fertilizers or composts a season or at least a few days before planting.

A well-drained, luminous, fertile spot (traditional or raised garden beds or tall container) is ideal for sowing the leek seeds. You should dig a ditch about 6-8 inches depth for planting the seedlings, and cover it with the layer of soil up to the base of the tiny leaves.

Leeks show symptoms of uneven growth, rigid stems and coarse taste, if they lack supply of moisture; hence watering the beds at least twice a week is mandatory. Once the plants start growing, they need at least 1 inch of watering per week through rains or irrigation. Throughout the growing season, using fertilizers and liquid plant foods will benefit the leek plants. Mulch the soil bed, using organic fertilizers or straw, after sowing the seedlings, to keep the soil hydrated. Soak the seedlings in liquid fertilizer, and make a mound of the soil around the stems in  the trench when the stems are about 1inch thick.

Remove weeds from the soil beds, and cover the seedlings while planting, with the aid of a floating row cover and seal at the edges with the soil, in order to rid the plants of adult onion maggot. As soon as you see rusty or silvery streaks on, the leaves, it is the time to rid the leaves of the pests by washing with water.

Slugs are real threats to young plants. Use traps or biological controls.

The leaves might rot, (white spots on the tips of the leaves) if there is ample rain during early spring or winter. Pull the rotten plants out, and improve air circulation by thinning the planting density.

Appearance of orange pustules on the leaves, during summer signifies leek rust. Clear off the affected leaves and manure them later.

You can harvest the leeks anytime. Ideally, wait  until they turn 1 inch or a little larger in diameter if want to obtain white colored stems. A spading fork makes the task easier to spread the soil and pull them by grabbing the base.

In order to store them for about one week, use airtight plastic bags and put them in refrigerator. For storing it longer, harvest leeks along with the roots. Trim the leaves till one inch of green remains on the leaf. Put the stalks in a moist box, with the root side facing downwards, and cover with clear sand, vermiculite or sawdust and place it in cool place. This way, you can store it up to 8 weeks.

You can freeze leeks by:

Washing, chopping and blanching as long as a minute in steaming water.

Draining the water, drying  the leeks, and then storing  in plastic bags and placing in a  freezer. You can use the frozen leeks in soups or other dishes.

‘Carlton’ AGM: Fast growing leek seeds, whose stems you can pluck by September-November.

‘Apollo’ AGM:  You can harvest this form of leeks during December. They bear blue-green leaves capable of resisting rust.

‘Toledo’ AGM: You can cultivate Leeks, bearing intense blue leaves and long stems during the later seasons and pluck during late November-February.