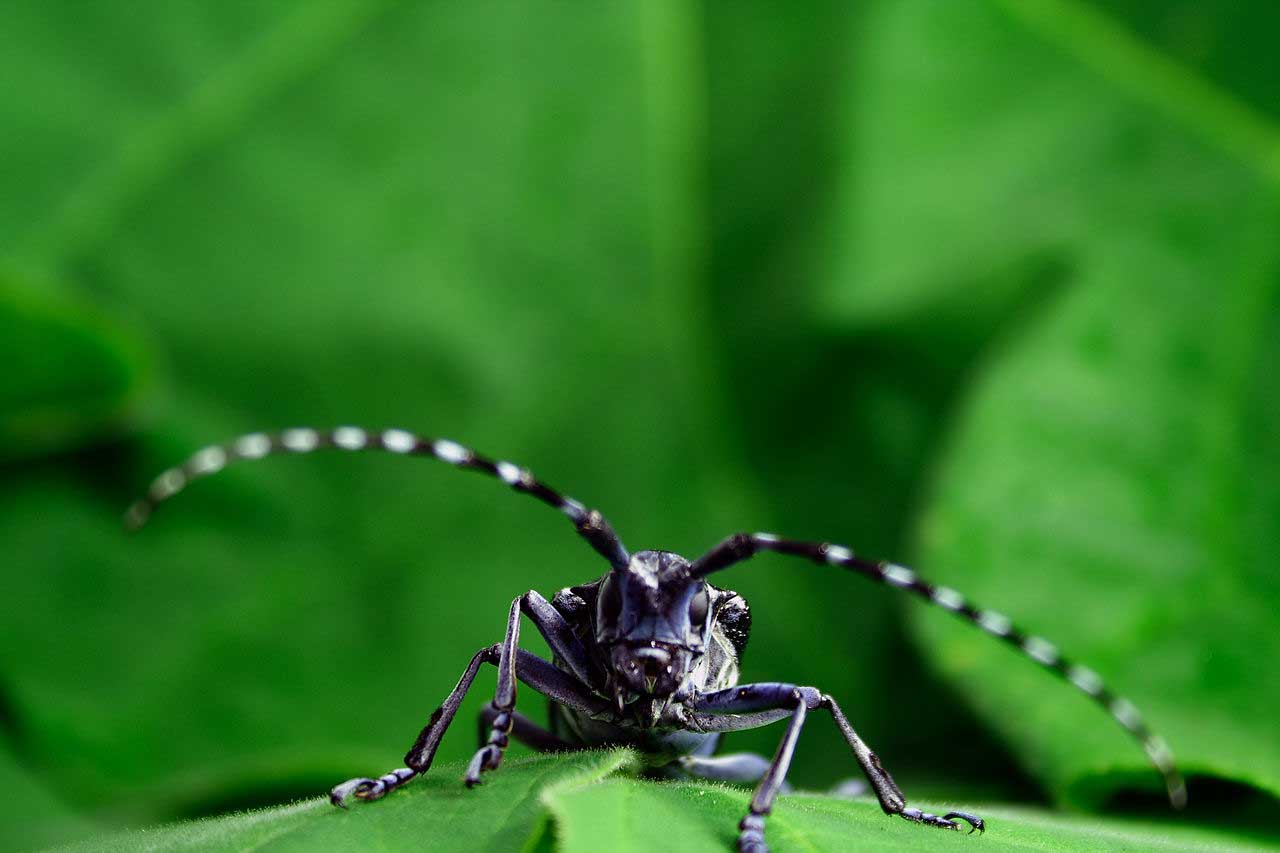 Anoplophora Glabripennis, commonly known as the Asian long-horned beetle, is a type of beetle from the Cerambycidae family and Coleoptera order. The other common names of this insect are Sky Beetle, Starry Sky, or ALB, and it is endemic to the eastern parts of China, Korea and Japan. Accidentally, this species has been again introduced to the United States now, where the discovery of this beetle occurred in the initial stages. It has also spread to other regions like Trinidad, Canada and many European countries like France, Germany, Austria, UK and Italy. It is assumed that this beetle has spread in Europe and America through some solid wood material brought from Asia.

The adult form of the Asian long-horned beetle is very large in size and attains at least 2.5 to 4 cm in length. This beetle possesses antennae of white and black shade that grows more than the size of their body that is around 10cm. This insect is found in a shiny black color and displays around 20 spots of white color on each cover of their wings. The legs of the adult beetle are seen in whitish-blue shade. These beetles are flying insects, but can fly only to a limited distance, due to their stout body, which is a limitation of the beetles from the Cerambycidae family. The unique body pattern and color combination of their body helps to easily distinguish them from the other related species.

The adult beetles are considered as serious pests due to their feeding habits. They mainly damage the host plants by their wood-boring habit. They also feed on the twigs, leaves and other plant debris. The larvae form of this beetle causes very serious damage by feeding on the limbs and trunks of the trees, causing damage to the xylem and phloem of the healthy trees. As this larva lives inside the trees for most of the time, they can easily spread to the other trees, thus infesting around 24 species of hardwood species.

The Asia long horned beetle is endemic to Japan, China, Korea, North America and Hainan”s Isle. Adult Asian long-horned beetle is mostly found near the stressed or fallen trees and healthy hardwood plantations. The host plants selected by these insects include healthy trees like Maple, Chestnut, Horse, Poplar, Rose Of Sharon, Willow, Birch, Mulberry, Elm, Cherry, Chinaberry, Pear, Citrus, Apple and Locust Trees. It also prefers hardwood trees, and is considered as a serious pest by the hardwood tree cultivators. It has also recently spread into the areas surrounding the city of Chicago and New York accidently, through the wooden crates and other wooden packing materials imported from China and other countries of Asia.

The larvae form of Asian long-horned beetle do not transform immediately into a pupa without reaching a proper weight. The possibility to overwinter as a pupa or larvae depends on the species, and also on the climate. Generally, these creatures take around 1 to 2 years to complete their life cycle, in which they can overwinter as pupa or larvae. Very rarely, some beetles have taken around 3 years to finish the life cycle. In the overwintering period, these beetles stay inactive, a dormant state termed as diapauses, from which they recover and continue to thrive actively in the next summer. In the larvae form, this beetle creates a gallery for feeding on the tissue of the plant or tree known as cambial region. Later, it forms an oval-shaped hole or tunnel in the Heartwood or Sapwood. This tunnel is used to discharge “frass”, (fragile perforated wood produced by the activity of boring insects) and most of them pupate at the exit of this tunnel in the early summer or late spring.

Adult fecundity and longevity is affected by conditions like the temperature and the selection of host plant during their larvae form. The female Asian log horned beetle experience a period of accustomed feeding for maturation after their emergence. The female is able to copulate even when their ovaries are small, soon after the emergence. The feeding helps them to mature physically, and develop their ovary. Research shows that the maturation period lasts for around 9 to 15 days in female beetle.
The male beetle of this family possesses mature spermatozoa before the process of emergence. This creature feeds only to keep up the activity of spermatozoa in a normal way. The larvae and adult Asian long-horned beetle excavate and chew the wood with their strong mandibles. They also possess strong antennae, which the males use to sense the potential female mates.

In the Asian long-horned beetle group, the male usually tries to contact the female by his antennae. If the female is willing, then the male will quickly mount over her and mate. If the male is able to mate with the female, then a prolonged boding between the pair is formed. When the female is not willing to mate with the male, she will show one of the signs like kick, run away, hit by using antennae, fly away, fall or take quick turns. In such cases, the male abandons the wish to mate with that female, and exhibits a wagging courtship action with his antennae. During this mating period, the male continuously grasps the female beetle”s body with the help of his tarsi in the front portion, or sometimes with both the middle and the front tarsi.

The Asian long-horned beetle excavate and create a feeding gallery on the trees which make the trees weak and infested, and can easily lead to the death of those trees. The larvae are the most dangerous because they excavate the cambial region of the trees and plants. This completely infests the trees and leads to the fungal growth, reduces the tissue growth and ultimately weakens the structure of the tree. The adults are less harmful as they only feed on foliage, twigs and rarely eat fruit-bearing trees. This species make do with both healthy and weak trees and even small to large plants.

In the United States, this Asian horned beetle is considered as the most destructive foreign insect. Such wood-boring insects have led to a damage of approximately 3.5 million dollars in the cultivation sector.

The emergence of the adult beetles from the trees happens at the end of the May, lasting till October in some Northern Hemisphere areas. The high frequency of the adult beetle is seen in the month of July. The infestation sign can be detected by searching for exit holes of around 3/8 inches in diameter of the larger branches of the trees. The other sign is the flowing of sap through the exit holes with grass or coarse sawdust on the surface of the ground or on the surface of the lower branches. Dying or dead limbs of the trees or yellow leaves, even when there is no drought is also a sign of infestation by this creature.

The only way to eliminate these beetles is by eradicating the infested trees. Chipping or burning of such trees also helps to eradicate the possibility of the development of the larvae inhabiting the other plant or tree tissues.