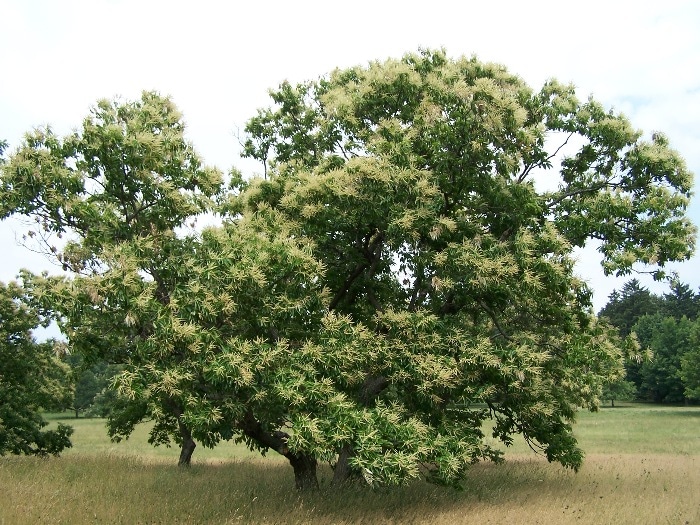 European Species: The European species of chestnut are sweet chestnut. These are the same species as horse chestnuts. The color of bark is gray. European chestnuts have a sweet taste, good size and it is easy to remove the inner skin of the fruit.

Fresh fruit of chestnut has 180 calories, which is lower than other dry fruits, almonds and nuts. Chestnuts do not contain cholesterol and no gluten. Chestnut is the only nut that contains vitamin C. Chestnut trees have a growth rate that is fast to moderate. The height of chestnut depends on the species of the tree.

History of The Chestnut Tree and the American Chesnut Foundation

For years now, the American Chesnut Foundation that was founded by a like-minded, well known group of plant scientists has been researching with science and breeding, to develop an American Chestnut tree variety that could become blight-resistant. Their sole intention is to re-establish the tree as a truly great specimen in the forests in the eastern part of the United States. They relented the sad prospective demise of the chestnut trees of the United States of America and wanted, above all, to restore its glory to its indisputable erstwhile status as a prominent tree in the American ecological system.  From an area of over 200 million acres in the woodlands of the east of America, ranging from Maine, Florida, West Piedmont and Ohio Valley it has succumbed to the lethal chestnut blight, an extremely serious fungal infection, to perpetrate a fall of about a quarter of the entire population of the chestnut trees in this area, where, the experts had estimated four billion chestnut trees existed hitherto. One cannot but agree that the chestnut tree is an extremely important part of the ecosystem in the U.S.

The leaves of chestnut trees are simple and are 10-30 cm long. The bark of chestnut tree is smooth. The fruits have a pointed end. The fruit has two skins. The one is shiny, hard, husk called pericarpus. Under the pericarpus, a thinner skin is available, which is called episperm or pellicle. The leaves of the chestnut trees are dark green on the top and light green at the bottom. Before dropping, the leaves turn brown, yellow and gold. In the past, chestnuts were an integral part of the human diet. Except American chestnuts all species are numerous in the wild. Hair shampoo is prepared from the leaves and the skin of the chestnut fruit. Using the chestnut meal, fabrics can be starched and linen clothes can be whitened. The fruit of chestnut tree can be eaten raw. By drying and milling into flour, chestnuts are used in the preparation of cakes, bread, pancakes and pastas. It is also used as a thickener for sauce, soups and stews. For starching of a textile, an extract of chestnuts is used. Chestnut trees are used as flour, substitute for coffee, bread making, substitute of cereal and other cookery uses. Leaf infusions of chestnut tree are used in respiratory disease and remedy for whooping cough. Roasted chestnuts are sold in the market, streets and in fairs by vendors.

Chestnut trees are easy to grow. They do not require a lot of care and maintenance. For good growth, chestnuts require drainage to avoid root rot. They also require fertile soil and full Sunlight. To avoid weeds, compost is ideal for chestnut trees. Watering regularly is also good and for large crops and for rapid growth, fertilizing is required during the first growing season.

Root rot is a disease which is caused by the extra exposure to moisture. This disease can infect the leaves and pressure them to drop. Dark spots are also developed on the bark of chestnut tree by this infection. Powdery Mildew is also a disease which infects the tree and affects the growth of these trees. Ink disease attacks the phloem tissues and roots of the chestnut tree. By this disease, the leaves turn yellow and the fruits remain small and nuts permanently drop out. Phytophthora disease is very harmful to the chestnut tree.  It may cause death of the tree.

Wallabies and rabbits can do damage to the young chestnut tree. They need protection by securing the trunk of the tree or by a fence. Mottled umber moth and winter moth are the most frequently occurring pests. At harvest time Rosellas can also be troublesome. The chestnut weevil can damage the fruit of the tree.

Fresh chestnuts can be preserved in syrup or sugar. Cooked and shelled nuts can be refrigerated, covered and used within 4-5 days.