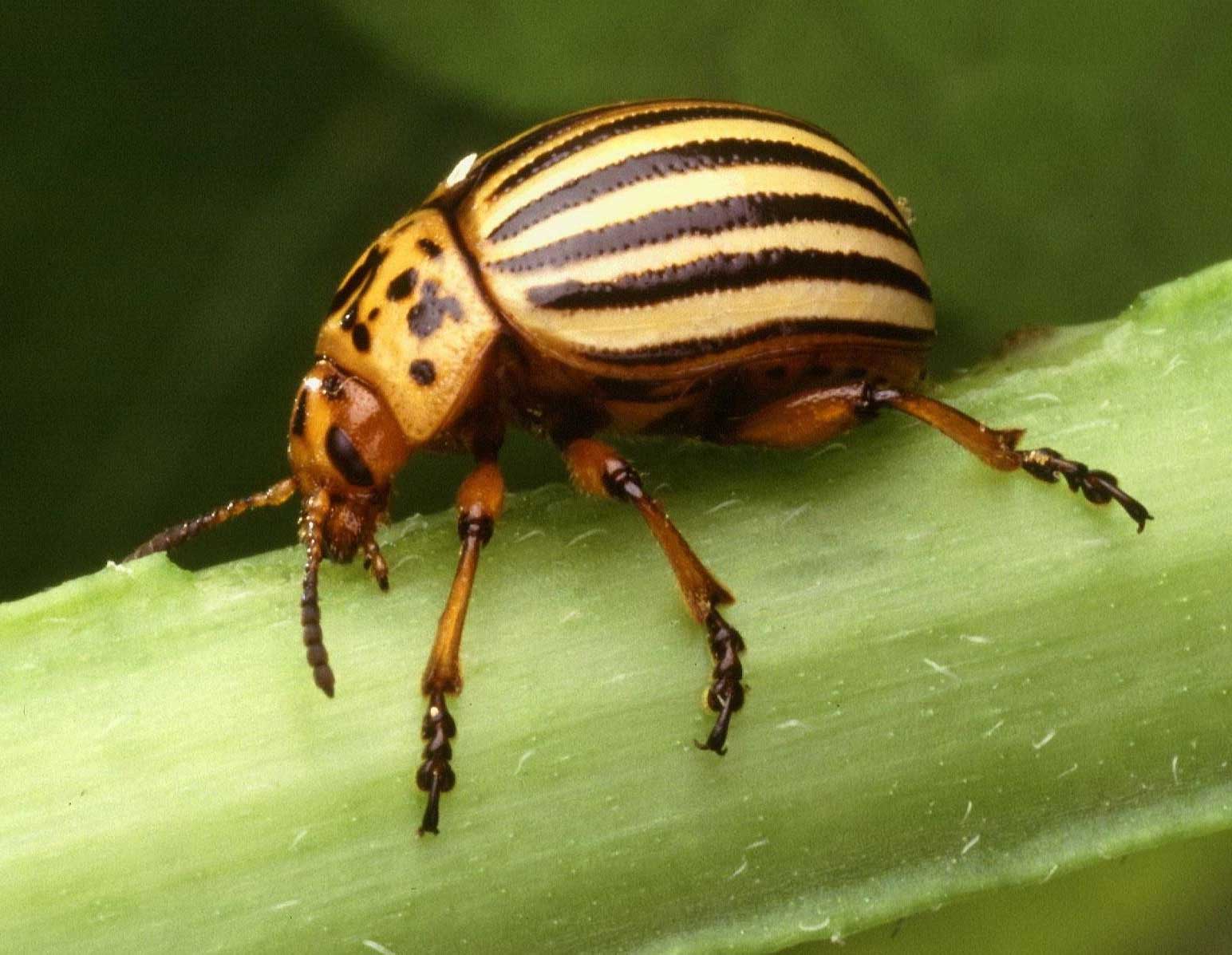 The Colorado potato beetle, (whose scientific name isLeptinotarsa Dacemlineata) is called by other names such as the Ten-Striped Spearman, the Colorado Beetle, the Potato Bug and the Ten-Lined Potato Beetle. It is the main pest of the potato crops. The size of this pest is 10 mm (0.39 inch) At length, the other features of the potato beetle are; the color of its body is brilliant orange to yellow, with 5 prominent stripes, colored brown, throughout the length of its elytra. It resembles its immediate relative, the false potato beetle, which looks similar.

It was Thomas Say of 1824 who discovered this potato beetle from the specimens that he gathered from the Rocky Mountains on the buffalo-bur, scientifically called Solanum Rostratum. Even though there is no clear history of its origin, it appears that Mexico and Colorado share its native division in the south west of North America. It was in the 1840s that this species took on the cultivated potato as its host series and very fast it turned into the main damaging pest of the potato crops. Insecticides were used on a large scale in the agricultural crops very effectively to control these potato beetle pests, till in 1950 when it was resistant to DDT. Since then, several other pesticides were used, However, as time passed, it became resistant to them too.

Other pesticides have since been used, but the insect has, over time, developed resistance to them all..

The shape of the adult Colorado potato beetles is oval with a length 3/8 inch. Their prothorax is in yellow with an orange tint, the covers of the wing (elytra) are of yellowish color, having 10 thin black colored stripes. The females lay brilliant yellow eggs of oval shape in clusters behind the leaves. The initial hatched young larvae that hatch are brick red in color with black colored heads. The mature larvae are colored pink to salmon, with heads, black in color. All the larvae posses two rows of dark spots on either side of their bodies.

The female Colorado potato beetle is very productive; it lays as many as 800 eggs, orange to yellow in color and of length 1 mm.. Normally the female deposits clusters of them in 30 numbers at the underside of the host leaves. The temperature is the base on which the development depends. The eggs hatch out within 4 to 5 days into larvae of reddish brown color, their back is humped, having 2 rows of dark brown spots on each side. Their diet is leaves. The larvae develop into 4 clear stages of growth (instars). 1st Instars are almost 1.5 mm in length; the 4th is almost 8 mm in length. The duration of the 1st to the 3rd Instars is 2 to 3 days; the 4th, 4 to 7 days. On acquiring the full grown size, every 4th Instar takes extra 7 days in the form of a non-feeding pre pupa, this is defined by its dormant state and pale color. The pre-pupa falls on the soil and digs many inches deep; further, it pupates. The adult emerges within a few weeks to carry on the cycle, depending on the quality of the host, the light regime and the temperature. If not, it goes into diapauses and prolongs the emergency till spring. After that, they go back to their host plant for mating and feeding. In certain sites, 3 or more generations are likely to happen during the same growing period.

The adults as well as their larvae eat the leaves of the potatoes, and in case they are not cared for, there is possibility of destruction of the plants Apart from potatoes; they also feed on tomatoes, eggplants and several other plants of the family in the nightshade (Solanaceae). 75 % of the damage caused is due to the Old Larvae, i.e. the 4th Instar of the larvae). Potatoes are tolerable to 30% of the defoilage to some extent, when they reach the vegetative stage. However, when tubers start coming out in bulk, they are more sensitive to de-foliation effects, where they are able to tolerate just 10% of defoliation.
Depending on the photo period (day length), the summer matured ones, change their behavior to a great extent. The adults that come out in early August and late July normally mate and start oviposition (beginning the next generation). Those adults arriving after the mid August, normally, have food for some days; further they either burrow down the ground or fly towards the edges of the wood-lots for entering diapauses for the coming winter. The summer production of mature beetle diapauses among the crop field or fly towards the rows at the edges or to the adjacent trees prior to burrowing down the soil for diapauses.

In Pennsylvania, the beetle reproduces twice in one generation of growing season. The adults that overwinter emerge at the beginning of May, search for a host and start to feed and mate. In central Pennsylvania, Oviposition (laying of eggs) takes place in the beginning to end of June, and in the warm areas of the State. Whereas in the case of the majority of the insects, all the types of activities and growth from stage to stage depends on the temperature. The number of eggs that a female lays throughout its life amounts to 500. According to the temperature variations, the eggs are hatched within a week. The larvae undergo 4 instars (stages in growth), within a period of 2 weeks. The 4th Instar larvae fall to the ground from the plant and dig into the ground for pupation. The duration of the pupal stage is one week; this becomes the termination of the first generation of reproduction.