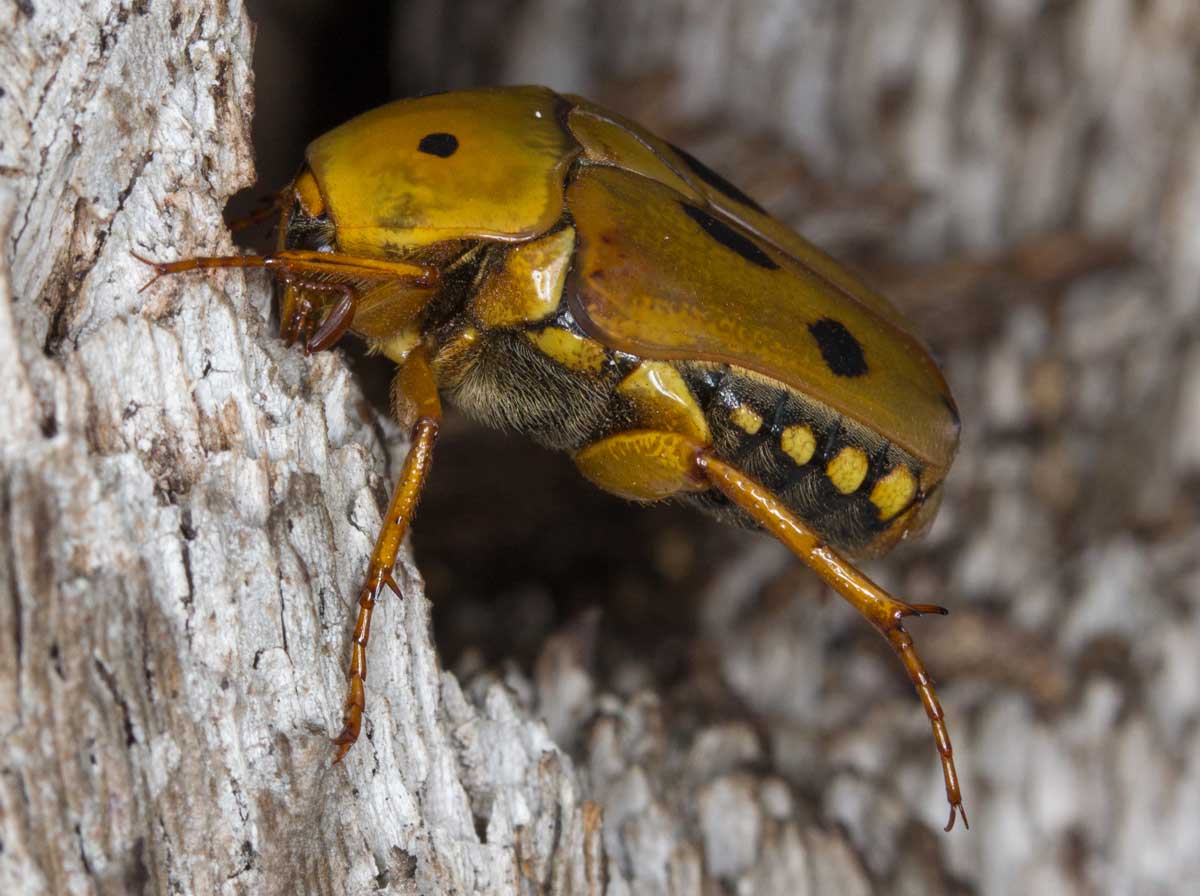 The Scarabaeidae beetle family is the second largest one with more than 30000 species worldwide, and around 2000 species identified in Australia alone, first being the Curculionidae. It consists of both small and large sizes of beetles that range in length from 2 to 70 mm. These beetles are generally known for burrowing, and also possess well developed tibiae, situated on the forelegs that helps them to dig the soil. The adult Scarab beetles have a stout body, along with a plate, referred as ‘clypeus’. This plate hides the mandibles of this creature, when it is looked at from above. Some species of scarab are also seen with horns or Pronotum on their head, used to fight with other male rivals.

The scarab larvae have a distinct C-shaped body. The main food of this insect is decaying or fresh vegetable. Some other scarab species also feed on dung or decayed part of animals, leaves and other debris. They also prefer the nectar of many native flowers. Most of them have a bright colored body, whereas some are iridescent. Out of the total scarab species, more than 1200 species are found in the northern parts of the United States. Some species are also commonly found throughout the basin of the Murray-Darling and the southern parts of Australia

Scarab beetles possess long horns on the head, which they mainly use to fight the males of other species. The species Onthophagus Pentacanthuscan grow around 18 mm in size ad possess quite long horns, as big as its body. Scarab beetles can be found in an array of colors like purple, yellow, orange, blue, black, bronze and gold, and the adult beetles have a round or oval shaped body. This adult beetle is basically nocturnal and gets attracted towards the light, especially at night. They also inhabit bovine dung, like that of the oxen and cattle or inside the pitfall traps that has human dung. The adult beetle”s legs have teeth on the outer surface of the front legs.

The grubs, a larvae of scarab beetles, have a C-shaped body of white or pale yellow color. It is mainly found inhabiting the debris or under the soil. Several members belonging to this family possess structurally colored shells that are the left-handed circular polarisers of this beetle. It was the foremost example discovered regarding nature”s circular polarization.

Similar to the life cycle of all other beetles, this beetle too has four developmental stages, namely egg, larvae, pupa and adult. The scarab beetle undergoes the metamorphosis process to emerge from one stage to another. The female beetle basically lays eggs in the soil, dung or on other decomposed material like carrion. The eggs hatch within 10 to 14 days, out of which the larvae form emerges. The dung beetles deposit their eggs inside the dung balls, made by the male and female adult; hence, they primarily eat the dung. The other species also feed on decaying plant materials, roots and decomposed dead animals for a period of minimum 2-3 weeks, after which they undergo metamorphosis to form pupae. In winter, this insect goes deeper into the soil to overcome the freezing temperature. In the beginning of summer, the pupa undergoes the metamorphosis process to emerge as an adult Scarab Beetle.

Most of the scarabs are known as scavengers that mainly feed on fungi, dung or carrion, but other species also prefer feeding on plant sap or pollen. Flower scarabs are the main pollinators of flowers. Other than that, many species also feed on the plant roots, leaves and other parts. The most preferred food is the dung that comes from elephant, sheep, horse, camel and other cattle.

Like other beetles, the mating process of the Scarab Beetle is also unique. The female scarab beetle emerges from the soil and lands on a surface. Then, it exhibits a rhythmical expansion and contraction of the abdomen. Males get attracted to these female beetles and the mating process begins. The Dung Beetle species roll the dung ball towards soft soil before they start mating. After the genital organs connect, the male beetle raises his legs to suspend his body with the genitalia. In some species, the mating process extends for a period of 2 hours. The female beetles burrow in the soil up to a depth of 2-4 inches to deposit her eggs. In the dung species, the female and the male build a brooding chamber with the dung, in which the eggs are deposited. The female scarab beetle lays around 1 -3 eggs each time, and emerges out from the soil to continue feeding and mating. Thus again after mating, it enters the burrow, repeating this process more than 16 times in its life, to lay eggs.. A female scarab beetle lays around 40 to 60 eggs in its whole life

Most of the members of Scarabaeidae family are considered as agricultural pests. The larvae and the adult form, both cause destruction of the plant parts. The adult beetle are active feeder on sunny and warm days, and infest the flowers and foliage of the host plants. The continuous feeding on the surface of the leaf causes it to turn into a skeleton. The grubs of this beetle also cause damage by feeding on the roots. This affects the grasses grown in the lawns, golf courses, and the like, weakening its roots that lose the ability to absorb enough water during the dry and hot days. This results in dead patches.

Use insecticides that have Dimethoate. Use it on the trunk of the tree and surrounding the vegetation in the day time to trap the sleeping swarms. The effects of the chemical also helps to control the development of any scarab eggs present in the surroundings.

Light traps or scarab beetle traps can be used in the areas that are more prone to damage. The glow light in the box draws the scarab beetle, and as it approaches, it strikes the roller present on the box”s top while entering, but the mechanism of the box is such that as soon as the roller is pressed, it flips over and the box gets sealed.

Regularly treat and cultivate the soil to kill the eggs and larvae, as they may appear on the surface of the soil, and predators like magpies will feed on them in a large quantity.

The weed control method is also effective, as it prevents the nesting areas for these beetles. Also, make use of soap and water solution on the infected areas, where chemicals cannot be used.

Remove the plants preferred by the scarab beetles from the property, instead plant some resistant trees and plants for the long term to prevent these beetles” entry. Also, take care to clear any sick or dead plants to lessen the feeding attraction of such places.