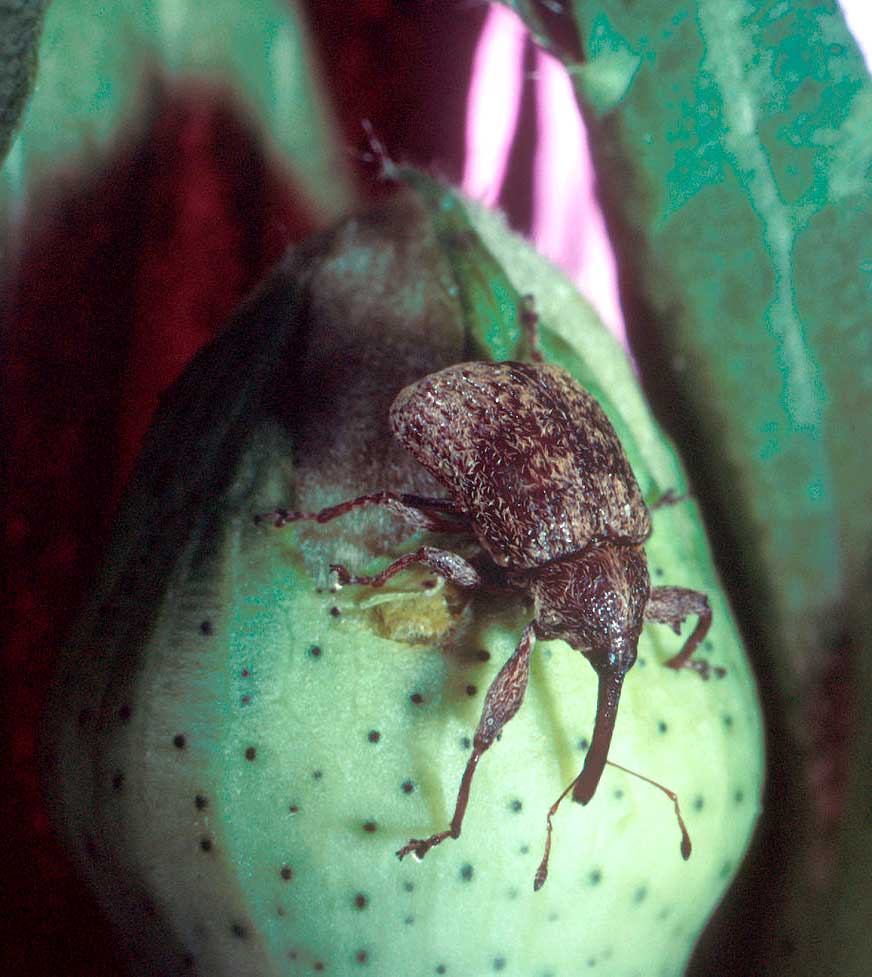 The Boll weevil beetle is scientifically named Anthonomus Grandis, and it feeds on flowers and cotton buds. It is supposed to be endemic to Central America. Late 19th century, it travelled from Mexico to the United States. By 1920s, it infested all the cotton growing areas of the US, disturbing the people working in America and the industries over there. Towards the end of the 20th century, it turned into a dangerous pest in South America also. Ever since 1978, the program to eradicate Boll Weevil in the US necessitated total cultivation to start once more in several affected regions.

The fully grown Boll weevil differs in their size, based on the food it gets while in the stage of a larvae; however, its average size is around 1/4 inch. This is inclusive of its snout which is curved and long, measuring half the length of its body. During Spring, the developed Boll weevils, come out from an inactive condition, and in a period of several weeks, their pale yellow color turns to black or gray.

The grownup Boll weevils lay their eggs and feed on cotton balls that are developing. Feeding punctures are seen in the form of open tiny holes. However, puncture formed by laying eggs is sealed with a tiny growth like a wart. The two pointers lead to squares and tiny boles to open. The legless white larva pupates and feed inside the ball or square.

With the onset of winter, the grownup weevils are seen near cotton fields in the properly drained areas following diapauses. Towards the beginning of spring and all through the winter, they emerge and enter the cotton fields. At the end of spring their emergence reaches its peak, and they feed on cotton balls that are not fully mature. Within a period of 10 to 12 days, the female weevils lay around 200 eggs. The flower buds are wounded on their exterior due to the oviposition.The eggs hatch in a period of 3 to 5 days, inside the cotton squares (bigger buds prior to blossoming), they feed for 8 to 10 days before they pupate. The pupal period takes another 5 to 7 days. The stages from the egg to the adult stage, extends to almost 3 weeks in summer. Under ideal situations, you may see 8 to 10 generations in a single season.

The Anthonomus infested all the cotton growing areas in the US and Mexico, leading to a major eradication plan which began in the year 1978.

Drought and severe heat are the other restraint on the population of the Boll weevils. The predators in nature are insects, fire ants, birds, spiders and a parasitic wasp, and the like At times, the insect emerges following diapauses prior to cotton buds become available.

The food of the adults consists of leaf petioles, fruiting forms and terminal growths. It is in balls and squares that the female oviposits the eggs. Frequently insect aborts the eggs in squares Sometimes, the bolls are infected, when this may lead to ball rot. Feeding of the adults on the petiole of the leaf, can cause leaf wilting referred to as “black flags.”

Georgia says they have eradicated boll weevils. The ancient method of controlling Boll weevils is diapauses control (averting weevils from inflowing diapauses as soon as harvesting is over by destroying stalk and using sprays), application of insecticides at the stage of pinhead square (to decrease inhabitants of over wintered Boll weevils before oviposition), and application of insecticide in intervals of 3 to 5 days in the middle and late seasons, starting from the start of the initial bloom.