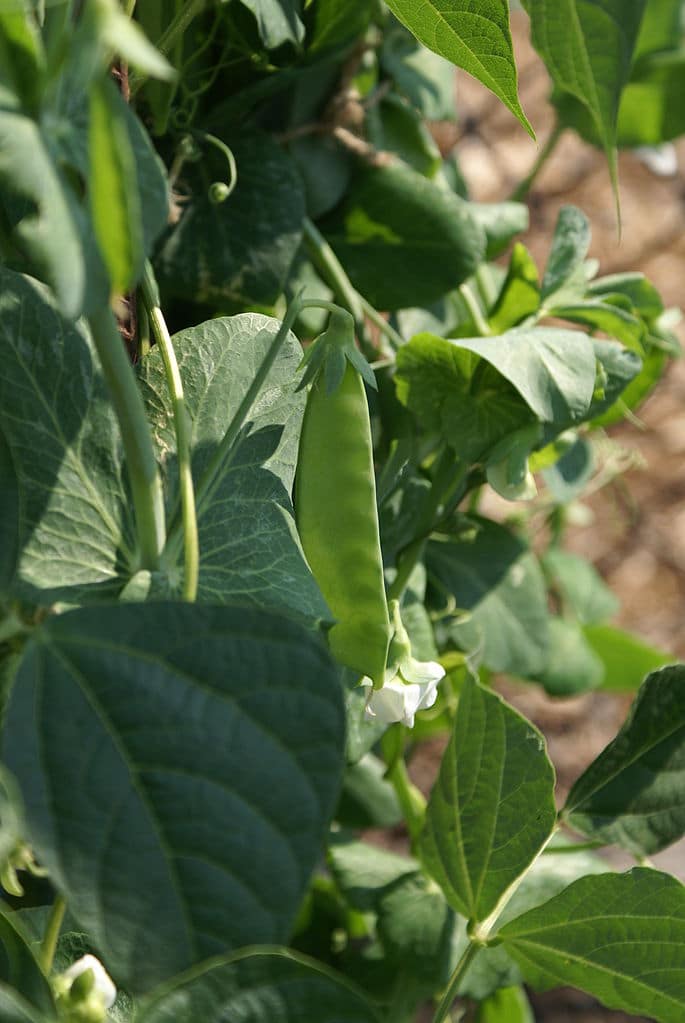 Pisum sativum variety saccharatum or the snow pea belongs to the legume group of plants. It is a type of pea that we eat whole as a pod in the unripe state.  “Mangetout”the French meaning “eat all,  applies to snap peas as well as snow peas.

The customary English peas are round, sweet, green peas embedded in a pod; you remove the peas and discard the pod. A different variety of pea is the snow pea, flat crunchy sweet pod of the Chinese cuisine, which you eat whole. The pea has restricted growth  inside the pod, but still, one  pea can combine the sweetness of the English peas and the crispness of the shell or the outer shell or pod of the snow peas.

Even though its origin is not well-known, history has shown it excavated from  an Egyptian tomb at the Thebes and in the excavations in Switzerland. The Romans and the ancient Greeks used this pea profusely. The word pea derives  from the Latin word ‘Pisum’.

How to Grow Snow Peas at Home Growing snow peas is ideal in moist and cool weather. You can plant them  in early spring, when you can get a heavy yield. Harvest in the fall during calm climates. The peas prefer a drained loamy soil of high fertility but they tolerate most of the soil excluding those of  impermeable clay and heavy soil. Maintain the soil easily drainable by adding in enough of compost.

Early spring when the soil attains a temperature of 45°F is the right time to plant your Snow peas. Before planting them, ascertain that the soil is sufficiently dry so that the soil does  not adhere to the garden tools. Set the plants apart by 5 inches.

Restrain water a bit at the first phase of growing, this will enhance the root to grow deeper (the pea roots are  shallow). The sight of the maiden flower till harvest shows the real criticality of watering. In order to have flavorful, fully developed pods, give them a steady supply of moisture.

As the name implies, snow peas are crops that love cool-loving nature. It is possible for them to germinate even at temperature as low as 40°F. Even though they normally germinate at temperatures of 50-60°F the tender plants tolerate mild frosts even in the sheer absence of shelter.

You must account the period of maturity given in the tables on the seed packet from the date of seeding directly. The temperature of the soil dictates the period of germination.

Tender pea plants adjust  to mild frost; hence plant the peas in the garden prior to the date of the last moderate frost in that area. Even then prepare to give protection of the late frost to the plants that flower. Late frost is harmful to flowers and at times causes the little growing pods to crumble.

When the plants grow to a height of six inches, mulch them to a thickness of two inches with natural manure such as compost, straw or grass clippings. Mulch is excellent to suppress the weeds as well as to retain the moisture content. Free your peas in the growing area from weeds by plucking off the strange plants manually or by a shallow cultivation. Aphids often harm the vines. A dose of insecticidal soap will prevent the aphids from attacking the plants. Root-rot disease and Fusarium wilt easily effect peas; particularly in  soils with  insufficient drainage. Add compost to better the drainage of the soil and prevent the disease from encroaching.

You can prevent fungal diseases like powdery mildew by watering the peas early morning so that the leaves become dry by evening. Otherwise, use a drip irrigation or water with a soaker hose to prevent the leaves from getting wet every time you water. You can prevent many of the  problems caused by diseases, by planting varieties like Sugar Ann that show resistance to diseases.