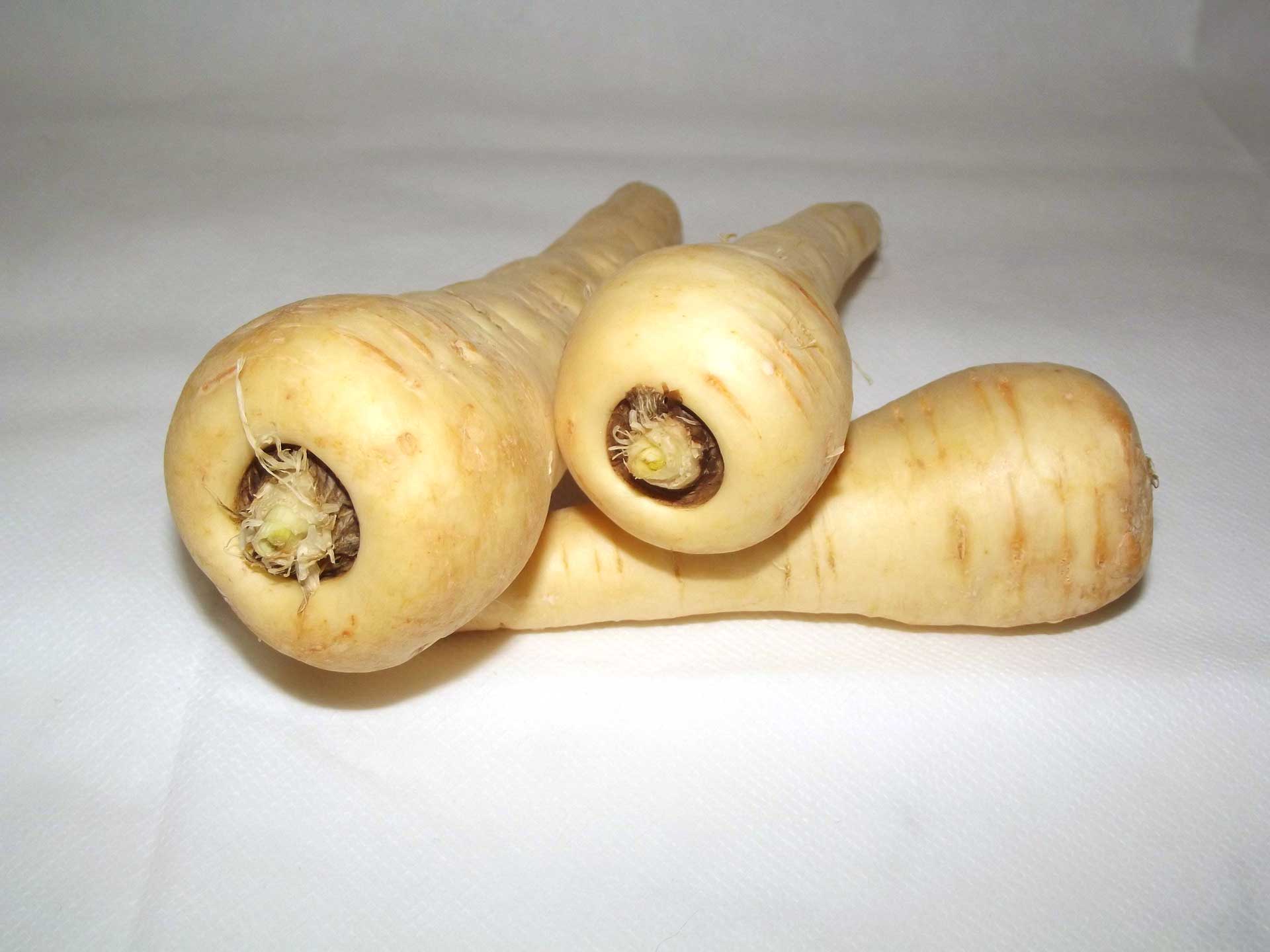 Vegetables site has articles on Parsnips.

Pastinaca sativa, commonly known as parsnip is an edible, long tuberous  root, close to parsley and carrot. Even though it is a biennial plant, most people grow it annually. During the first harvesting season, it develops mid-green leaves and a rosette of pinnate.  If you do not pluck them, they generate stems covered by an umbel of tiny flowers, yellow in color during the second harvesting season.

You can leave the creamy layer of long tuberous root of parsnip on the ground once they sweeten with maturity, after the winter. The fleshy cylindrical tap roots are delicious, smooth and often give rise to lateral roots. Some of the cultivars tend to deliver bulbous shaped roots, which many food processing companies prefer to use due to their resistance to breakages.

Even though popularized by the Greeks and Romans, the  first colonists brought Parsnips to America.

While a well-drained sandy, loamy  soil is ideal for parsnips, they grow well in gardens if kept in a luminous or slightly shady area.  In case of heavily acidic soil, you can add lime and further enrich the soil by adding manure and water. It is vital to check whether the seeds are fresh before sowing. Parsnips desire ample time to grow, thus seeding is important immediately after modifying the soil.

In 2-3 weeks, the vegetation will begin.

Parsnips need ample time to sprout, slowly. It requires a lot of patience, as it might take even up to a month to start  appearing.

Try sowing lettuce or radish in between parsnips, as they grow comparatively faster.

Hydrating soil is vital for the fast development of the roots, in case rainfall is below 1 inch per week. Intense watering of soil  facilitates growth of deep roots and relieves stressing of plants.

Mainatain 3-4 inches of spacing between the seedlings.

Remove weeds from the beds; otherwise they will compete with the young plants for nutrients and water.

In order to leave the parsnip roots untouched, use hoeing technique.

Avoid fresh manures, as it distorts the root crops.

Carrot Fly: Carrot flies are very harmful as they often lay eggs in the soil, near the plants, whose larvae enter the roots. Plant some onions instead of carrots or celery near parsnips.

Celery Fly – Even though the Celery fly does not harm the parsnip roots, they distort the leaves with some brown blisters. Wipe out the traces of the affected leaves immediately.

Canker – Are dark spots and patches on portions of the root, that  mainly targets the injured roots. Raising the pH value of soil around 7.0 will relive the plants.

Leaf Spot – Sometimes small brown spots appear on the leaves known as leaf spot. It does not harm the roots.

Pale Leaves – In case of paling of tops of parsnips, supply nutrients and enrich the soil.

After the leaves dry, pull the parsnips with  the aid of garden forks, or allow them to stay on  the ground until you are ready to use them. Frost improves the flavor of parsnips. Plucking is not very simple in case the soil becomes rigid. Preserve in cool, dry place till it becomes usable. Gladiator F1: Delicious variety of parsnip, which can resist canker well and is a good cropper.