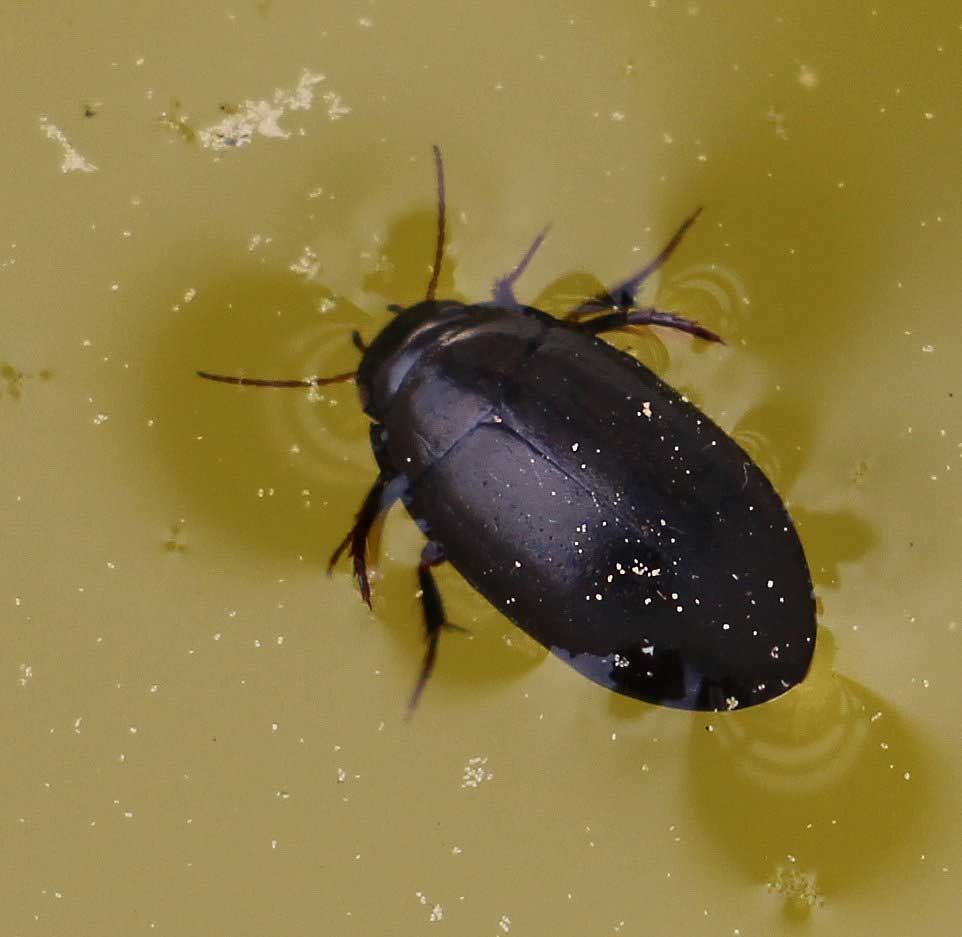 The generic name “Water Beetle” refers to any beetle that, during its life cycle at any point, has adapted to living in the water. Except for the marine species of beetles which live in the intertidal zone, most other water beetles live in fresh water. Roughly around 2000 species of these real water Beetles Are Found Throughout The World, Some Of These Are The Water Scavenger Water Beetle, The Diving/True Water Beetles and the Whirligig Beetles.
Typically, these beetles have an air cavity beneath their abdomen called elytra. This air bubble prevents the water from entering the spiracles and also facilitates air supply. The female beetles have a grooved hardened elytra or the wing cover while the males have a smoother one, which forms a cavity just above its body. Beetles regularly rise above the water surface in order to replenish the elytra cavity with fresh air supply. The water beetles are known for their greed and are sometimes referred to as water tigers. The adult beetles undergo hibernation for the major part of the year except for spring, when they are active and feed on insects.
Some families have “physical gill” or a modified exoskeleton to form a plastron. It allows direct gas exchange when in water. Others have hind legs, which are fringed to aid swimming, but most of the beetles do not have it. Most families have aquatic larvae while many of them have aquatic larvae, but adults are terrestrial.

These beetle species are large insects with prominent foreleg pincers. They have a flat and oval shape and are of dead leaf like color. In order to escape their predators, they are known to play dead. When threatened or agitated, they sting badly and the sting is very painful. These beetles find shelter at the bottom of muddy waters and make it their home. Water beetles are attracted to sources of light. Generally, this insect is about 1.6 inches to 2.4 inches in size.

The life cycle of the aquatic beetle has four life stages during which it undergoes transformation to eggs, larvae, pupa and adult.

Based on its species, the female beetle typically lays anywhere from one to hundreds of eggs at a given point of time.

Eggs are deposited near places like the moist soil, the river substrate or on a host plant so that these can serve as a larval food supply.

It takes 1-2 weeks for the eggs to hatch.

Once hatched, these larvae undergo 3-8 stages of metamorphosis called Iinstars” before they become pupae and change to adults.

The beetle enters the pupa stage on land.

The larvae enter the land, but still in close proximity to water, to pupate safely.

The pupal stage extends to several weeks depending upon the environment and the species type.

During their adult life, the aquatic beetles have short lives and some of them feed while others don”t.

As they belong to the kingdom Animalia, the diving beetle shows sexual reproduction. It is believed that pheromones play an important role to locate a male and they deploy elaborate methods while mating. The union is of shorter duration of maybe less than an hour during which the male sperm is transferred and the female egg is fertilized.

Aquatic beetles employ several methods to retain air under the water surface. Beetles hailing from the family Dytiscidae hold air in between the elytra and abdomen while diving. Beetles from Hydrophilidae family have hair that retains an air layer against their bodies. The whirligig beetles hold an air bubble with them whenever diving while the crawling water beetles use elytra and the segment of their back legs (hind coxae) for air retention.

The elytra facilitates the flying and moving for beetles through narrow spaces. They do so by folding their soft wings inside the elytra when not flying and by opening the wings out immediately before taking off. Owing to the tension on the cubital and radial veins, the wings are maintained in straight position. Further the movement of the wings, that is the folding and the unfolding, is done by the muscles connected to the wing base. For the day-flying species like Buprestidae, Scarabaeidae, the elytra is not lifted wholly as they have the metathorax wings (posterior of the three segments in the thorax of an insect) which extend to the lateral margins of elytra.

The feeding habits of the beetles vary with their species as they can exploit the diverse sources of food available in their various habitats. Some of the beetles are omnivores feeding on both plants and animals while other beetles have specialized diet. Species such as longhorn beetles, leaf beetles and weevils feed only a single plant and are thus very host-specific. Many species of the family Staphylinidae such as rove beetles and ground beetles are carnivorous and feed on other arthropods like snails and earthworms. Most predatory beetles have general prey preferences, but few species have specific requirements. Decaying organic matter forms the primary food source for many species. This includes the Coprophagous species (for example scarab beetles from Scarabaeidae family) which feed on the dung and the Coprophagous species (like the family Silphidae has Carrion Beetles) which consume dead animals. The clown beetles found in the dung are predatory in nature and prey on the larvae of these necrophagous and Coprophagous bugs.

Depending on the source of their food, water beetles are scavengers, herbivores or predators. The herbivorous type feed on the aquatic vegetation like the dead leaves and algae. They also suck the sap of the nearby plant. Scavenger beetles consume the dead and decaying organic material found in the water. This decomposed matter can come from smaller dead organisms, feces or aquatic vegetation. The predatory great diving beetle eats the tadpoles, worms and sometimes the smaller fishes.

Water beetles have a long life and thus can be found at any time of the year. However, they are found often in Spring and Autumn.

According to a UN a report, children in countries like Thailand are taught to grow beetles at school.

A Large population of water beetles is credited to control the other insect population in the wetlands when the fish population is lacking.

It is believed that the greatest danger to the water beetles is the lowering of the water table and degraded water quality.