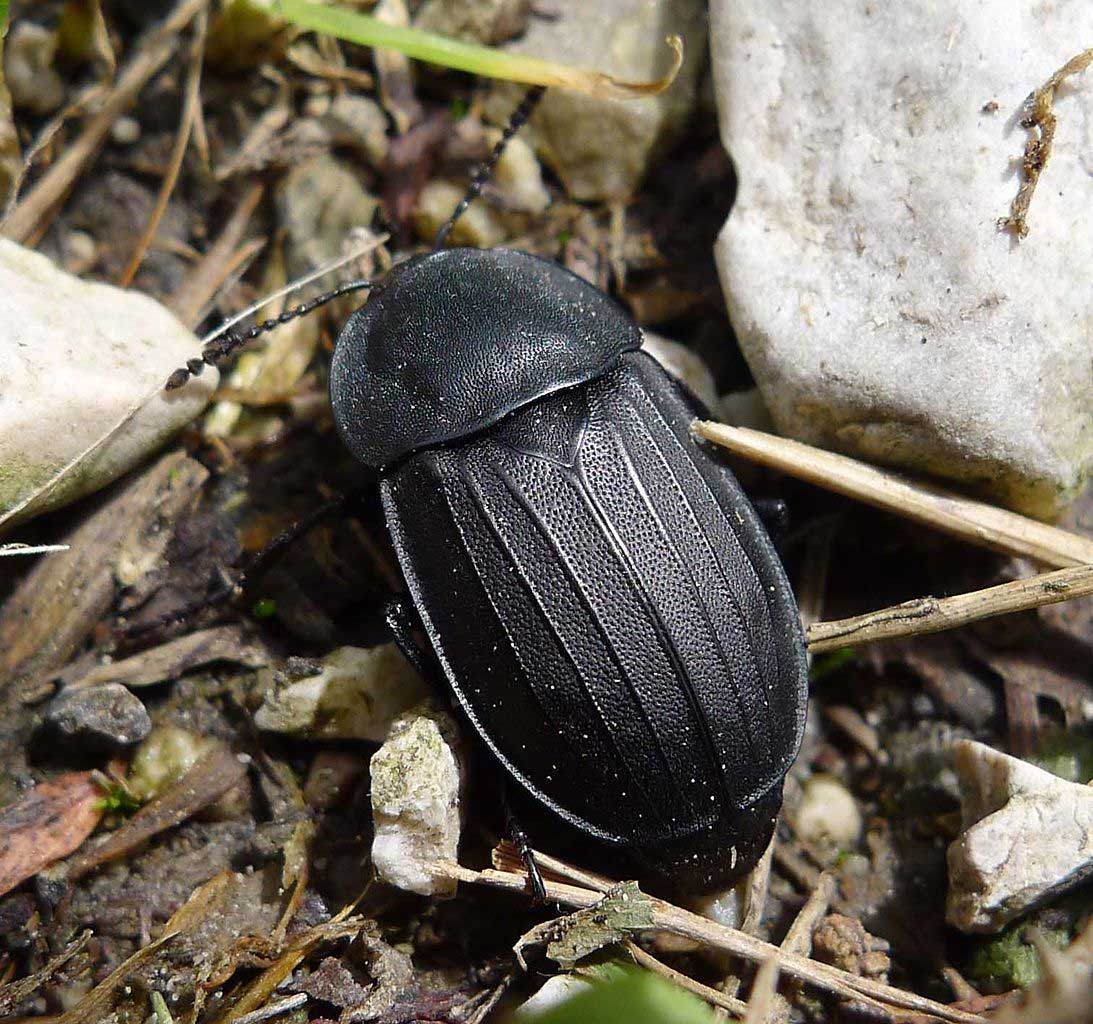 The beetles of Silphidae family are commonly referred as Carrion beetles, Burying beetles or Large Carrion beetles. This family consists of two subfamilies, namely, Nicrophorinae and Silphinae. The members belonging to the Nicrophorinae group are commonly termed as sexton beetles. It consists of only 200 species, of which more diverse ones are found in the temperate areas. Both members of the family mainly eat the decaying organic debris like dead animals. Silphidae beetles are mainly used in the forensic field, as it helps to estimate the decaying body”s Post-Mortem Interval, on which it inhabits.

Different species of Carrion beetles attain different sizes, ranging from as minute as 35mm to an average of 12mm. Most of them have bright colored markings like yellow, orange and red on a dark colored background. Some other species are also found with black body. The flexible, flat body and stretchable wings help them to enter under dead and decayed animals. The larva of this beetle is flat and long, and has a triangle shaped point at both the narrowing ends. After the eggs hatch, the first Instar feeds on a dark brown colored liquid, produced by its parents.

The burying beetle, otherwise called “giant carrion beetle“, is the biggest member of this genus, in North America. The majority of the grownups is of length 1.2 in. (30 mm). Still the range is from 1.0 to 1.4 in. (25 to 35 mm). The clear orange-red on the shiny black color makes it easy to identify them. The frons (The free Dictionary. Theanteriorpartoftheheadofaninsect,lyingabovetheclypeus) is covered by a colored mark, a higher frontal head plate, and a colored plate analogous to it very much behind its head. The black color of the body makes a good contrast between the two. They have black wings and 2 pairs of scalloped spots, red in color, with orange color at the tip of the antennae.

You can locate Carrion beetles on vertebrate animals that are dead. You would do well to know that Different species search for varied food like dead carcasses of mammals, birds, and the like, while others look for decaying vegetation, fruit and dung. Some are daytime active, while others are nocturnal, and many of them cannot fly. Those that fly include the bumble-bee. Many are known to be attracted at night to light.

Fossils of the Carrion Beetles belonging to the Permian period, dating back to about 265 million years back, have been recorded, but, Pearson in 1962 describes the oldest fossil of a Silphid as that of the N. Humator, belonging to 10,500 years back. Many of the Silphids, even though they have wings, cannot fly, a fact that is mostly attributed to habitat changes over their evolution period. It is interesting to note that most Carrion Beetles that can fly, will be attracted to carcasses of vertebrates, while those that cannot fly, usually go for invertebrates found in the soil. It is also noticed that those that those that cannot fly, lay more eggs, because of the limited food source.

The Silphidae beetles experience Holometabolous development (Britania.com -A metamorphosis characteristic of beetles, butterflies and moths, flies, and wasps). This development is slower in Silphidae, if compared to that of Nicrophorinae. The Silphinae beetle”s life cycle from the stage of an egg to an adult takes around 26 to 58 days. The eggs of this beetle hatch within 2 to 7 days. The total 3 stages of Instars take around 30 days to complete. After that period, the third Instar will make arrangements to pupate. The pupation process takes more than 14-21 days, which is considered as the most important part in the process of metamorphosis. In this stage, the beetles reach sexual maturity, and their wings develop completely, after which they emerge as an adult beetle. The life cycle of Nicrophorinae is comparatively quicker than the Silphidae group. This beetle deposits the egg in the places nearby to carcass, and it hatches within 12-48 hours. The pupation period extends from 6 to 8 days, which takes place in the soil. After a few days, an adult beetle emerges, which quickly migrates in search of food as well as for a mate.

Nicrophorinae is expert in identifying corpses and burying them by removing the earth below them. The burying nature is apparently developed to avoid competition by other insects like fly maggots. Cases prove that when the two parents cooperate, the breeding process becomes a success. Normally the breeding parents work in a joint effort. However, when the carrion beetle males are big enough, they attempt to increase the reproduction by the emission of pheromones. As such he becomes the father of several offspring. When the corpse is bigger the chance of great competition between the flies dictates public breeding.

Not much knowledge is obtained about the behavior of Beetles, despite of the fact that a complicated connection is available. It is possible for beetles such as the ground beetles that belongs to the Megadromus to socialize, and look after their juveniles. There are occasions when Stag beetles whose scientific name is Holloceratognathus Passaliformis are seen in the local nests of ants, however, how they are associated is unknown. In many countries, several varieties of beetles infiltrate into the colonies of the ants and feed on them.

The adults rush up for their food, when they smell decayed matter. They lay eggs, and mate on the food they get. The behavior of the burying beetles is an act of decreasing the struggle for their juveniles; the corpse that are buried are not easy for the flies to find, but nevertheless they lay their eggs. The larvae in certain varieties have a fast growth, to a great extent, since the grownups remain and feed the juvenile. Carrion beetles always take along with them the mites, which are parasites of the maggots. – In some other method they assist the juvenile to fight for food.

These are associated with the Saphobius genus or dung beetles, they feed on vegetation that is decomposed, also the small beach-dwelling Phycosecis Limbata. They too eat carrion that is washed ashore.

In North America towards the North of Mexico, you can see 30 varieties. Few are generally seen. One of them is the American burying beetles, called Nicrophorus Americanus. This is an endangered variety in the central regions. Even though a few varieties of carrion beetles feed on crops, the majority of them are very useful- they transform decayed corpses into a more palatable form of their own bodies.

Some of the Carrion Beetles can be crop pests, especially in sugarcane plantations.