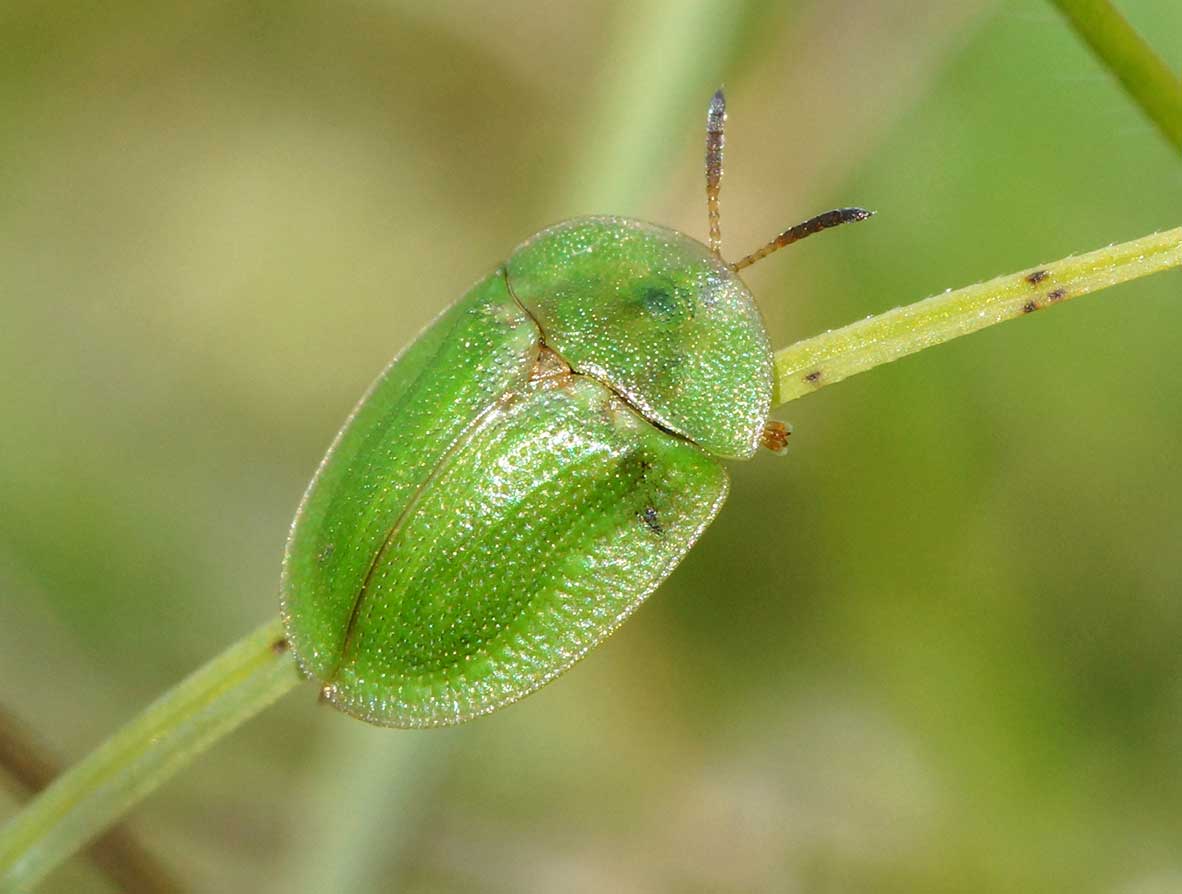 The Cassidinae leaf-mining tortoise beetles belong to the minor family of Chrysomelidae or the leaf beetles. It comprises of the previous vaguely explained subordinate family, the Chrysomelidae (the popular tortoise beetle) and the previous subordinate family of “Hispinae” (leaf-mining beetle), Now they are divided into different tribes, which includes the Cassidini Tribe, The whole lot comprises of 125 genus. The customary way of dividing the 2 groups was on the basis the habitats of the larvae and the common form of the adults. Many species from the beetle family are commonly referred as tortoise shell or tortoise beetles. The adults are characterized by an oval shaped, broad shaped ultra, and the tortoise larvae have a spiny and flattened body structure.

Tortoise beetle belongs to the subordinate division of the Cassidinae family. Over 3,000 varieties of beetles of this family resemble turtles. This is because their body extends sideways and forward. The length of a tortoise beetle ranges from 4 to 12 mm (below 0.5 inches) the larvae is also spiny. The mature ones as well as the larvae of certain varieties destroys the sweet potatoes and other plants in your garden.

These beetles are found throughout Southeast Asia, southern parts of China and Africa. More than eight species of Chrysomelidae Family and four of Aspidomorpha Family have been commonly seen in eastern parts of Africa. Many are also found in the southeast parts of Asia like C. Obtusata, Cassida Circumdata, elevate, Laccoptera Tredecimpunctat, A Amabilis and Aspidimorpha Miliaris. In the southeastern parts of the USA, the Charidotella Bicolor (Fabricius) is considered as the most common, but a minor pest.

There is only limited knowledge of the biological matters of this species, this is perhaps considering its economical importance. In the states towards the North, normally only one generation exists annually. In New Tersey, the first outward show of the beetle is in May or June, when they begin feeding on weeds and soon they lay eggs. In the months of July, you see a new generation of adults. They have limited food prior to diapauses (Wikipedia -A physiological state of dormancy with very specific initiating and inhibiting conditions) up to the coming spring. It takes 40 days for an egg to develop into an adult. In Florida, there is no awareness of the number of generations a year.

Initially, the female tortoise beetle lays several minute eggs, which are colored yellow or white and are oval in shape. Normally these eggs are laid under the leaf or in decayed wood. ( Certain female beetles conceal the eggs within them and deliver live larvae). Generally, the time for the eggs to hatch takes 4 to 19 days.
This is the time when the female becomes a voracious eater and continues growing, protecting its exoskeleton several times in the process. The majority of the tortoise beetles goes through a period of 3 to 5 stages while in the larvae stage and there are beetles that go through 30 stages and many beetles undergo only 1 stage.

The preventive methods are suggested in controlling the infestation of tortoise beetles on the beet. Extinction of weeds is a priority when a lure is noticed and every measure must be taken to confirm the ideal conditions of the growth and maturity of the beet. Growing Amaranthaceae freely is a device to trap the beetles. 2 adult plants occupying one meter square ensure normal protection. Thespecies Charidotella Sexpunctata, commonly referred as golden tortoise beetlebelongs to the family of the leaf beetle, Chrysomelidae. This species is endemic to the United States of America. They have links with the plants belonging to the Convolvulaceae family, which includes Morning Glories, Bindweeds and Sweet Potatoes. Both he larvae and the adults mainly eat the foliage of the plant.
This beetle attains a length of 5-7 millimeter, and has a wide range of body colors like gold to orange, often metallic, which is the reason behind the name “gold bug”. The external margins of its body have a more expanded look, and the pigmentation is absent. Its body color changes according to the seasons, as well as when they feel to be in threat or disturbed; they change the course of fluid flow between the layers present in its cuticles. This causes the beetle to change color from glittering golden shade to pale brown.
The female beetle deposits nearly 20 white, flat eggs on the plant stems, or on the under portion of the leaves. The reddish brown or yellowish spiny larvae hatch out from the egg within 5 to 10 days. The larvae undergo metamorphosis and shed numerous skins, as well as some frass on the anal fork, a structure positioned as a fecal shield to protect itself from its predators. This works well only against small insect predators, but is useless against Hemipterans (Wiki- cicadas, aphids, planthoppers, leafhoppers and shield bugs.). Within 2-3 weeks, this spiny larva transforms into a frass-covered brown pupa. Being a pupa for around 1-2 weeks, it again transforms into a fully developed adult.

This beetle is mainly eaten by Parasitoids like the Eulophid Wasp and the Tachinid Fly. The predators catching the larvae are Damsel Bugs, Assassin Bugs, Shield Bugs and Ladybird Beetles. The female beetle, after mating, deposits more than 250 eggs within 2-5 days from attaining maturity. They lay single eggs on either surface of a leaf, after which, it is covered by a golden brown shaded, transparent membrane, resembling a parchment. The eggs take around 4-7 days to hatch. This insect transforms and sheds its skin at least 5 times, and each time it takes around 1 to 6 days. During each Instar, the cast skin attaches to the spine, whereas the succeeding cast skin or Exuvium (Wiki- remains of an exoskeleton) gets attached to the previous one. These skins are taken along by this larva during the feeding or resting period. It also uses it as a protective shield by placing it over its body, when disturbed. The accumulated Exuviae grows longer in length when the larva matures. The total development of a larva ranges from 7 to 26 days. The pupal form attaches firmly by a silken thread from its caudal tip to any of the two sides of a leaf. The pupal stage extends from 4 to 8 days. The total time taken by a beetle to complete its life cycle is between 15 and 41 days. The longevity period extends from 2 to 29 days. The ratio of male to female is 1:0:1.1. The female beetle of this species starts to reproduce just after 3 days from emergence, and lays around a single to 3 eggs in each batch up to 7 eggs. The eggs hatch within 5-6 days. The larvae emerged from the egg, sheds skin more than 5 times. Each Instar takes around 1 to 8 days to transform into another stage. The larvae are very sluggish and rarely move to other areas of its feeding site, except when disturbed. The larvae take along the attached cast skin in an upright posture to conceal its body while resting. When the larvae reach the pupa stage, they attach themselves firmly to the underside of the leaf. Even in the pupa stage, this beetle carries the cast skin attached to its spine in the sub-anal area. This stage extends from 3 to 10 days. The total time takes to complete its life cycle is between 14 and 46 days. Its ratio between male and female is 1.9:1.0. The adult beetle”s longevity extends up to 2 weeks. Palmetto Tortoise beetle, also commonly known as the Florida Tortoise Beetle is a Hemisphaerota cyanea species. This beautiful beetle can be found on various exotic and native palms, which are damaged by its eating habits. This species is the only one that eats palm tree parts. This species, mainly inhabits Georgia, Texas, Florida, Alabama, Mississippi and Louisiana. They have a dark blue or purple body with alternating vertical ridges and pits in rows on the elytra (hardened forewing of certain insect orders).It has a yellow antenna with black base. It also has an enlarged tarsi for properly holding the substrate. Each tarsus possesses more than 10,000 adhesive-containing bristles. There are dual terminal pads on each bristle, but only a few bristles touch the substrate while walking. But when a predator, approaches, it immediately grasps the substrate with all its bristles and releases oil onto the surface of the pads. This adhesive oil helps it to grasp tightly by clamping its hemispherical shell against the leaf, thereby saving themselves from the predators. Cassida Rubiginosa, commonly referred to as Thistle Tortoise Beetle is from the leaf beetle family. This species possess a green carapace. Mainly found in Britain, it also inhabits Eurasia. Their main food is the Canada Thistle (creeping perennial); hence, as a biological agent to counter the spread of these creepers. It was introduced in Virginia to eradicate the thistles there. These beetles, were introduced to Canada accidentally, but from there, they also spread throughout the northern part of the United States. They are commonly termed “Green Thistle Beetle” by the biological control researchers and the landowners in New Zealand.