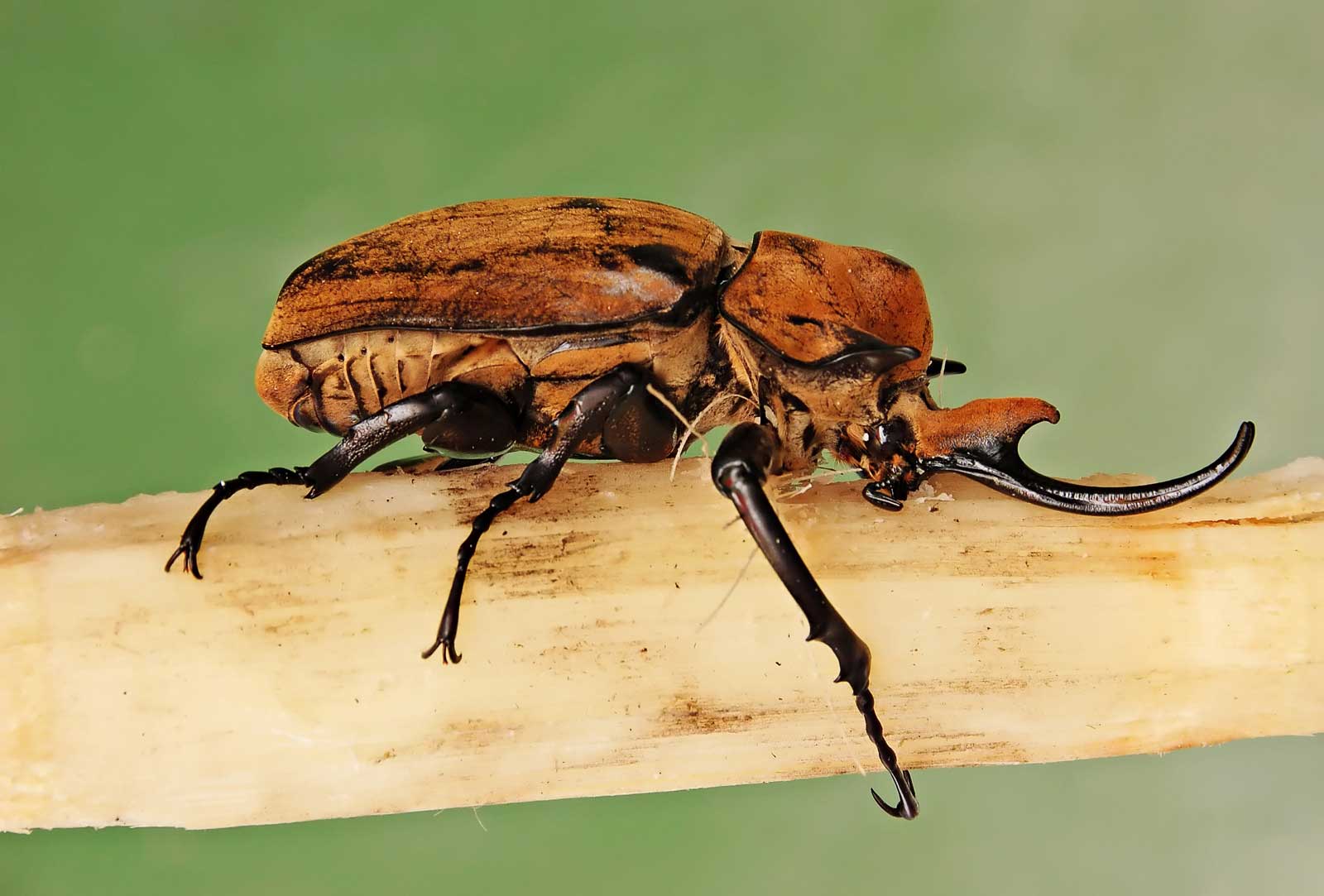 The Elephant beetles (Megasoma Elephas) belong to the family of Scarabaeidae and the subfamily of Dynastinae. They are the Rhinoceros beetles that mainly occur in Tropical America.
The Elephant beetles (Megasoma Elephas) are categorized as the colossus among the world of beetles. They are huge and distinguishing beetles, which have an elongated horn, like that of a rhinoceros, upon its head. This astonishing anatomy can be seen in the males alone and they utilize it to fight with the other males for both females and territory. On account of their appearance, a matured Elephant beetle has a bright black body which is coated with reddish – yellow or brown hairs. The male beetles horn also have a hairy enclosure and is arched towards a higher position. It is divided into two on reaching its topmost position.

The Elephant beetles are enclosed in a thin layer of minute hairs. They have a bulky hair growth only on the wing cases. The yellowish shade of the beetle”s body is due to the presence of these hairs. Two horns of the male beetle will be projected out of their head and the other one from the anterior segment of their thorax. The horns are a part of their protective system and also used in fighting with the other males to obtain nourishment as well as mates. Female beetles don”t have horns.

The size of the Elephant beetles can be in the middle of 7 and 12centimeters. Occasionally, males will be larger than this, and two to three times larger than the females.

The process of life form of an Elephant beetle is initially as an ovum, after that as larvae, then the pupal stage and finally it takes the shape of a matured beetle.

Elephant beetles take as far as three years to get advanced in the form of a matured beetle. The female beetle places her eggs inwards in some rotting woods or beneath the soil where they stay and attain their maturity. A few weeks after placing the eggs, normally three, the larvae take a C – shape and white color, an immature stage in which they have brown heads and six legs. They exist on the stage of larvae for about 29 months and all along this period, they intake natural materials. The pupal phase, which is the third stage in the development process, takes about five weeks at a temperature of 26 degree Celsius. After becoming a matured beetle, they live for about one to three months.

The fully grown up Elephant beetle may include flowers, fruits and the fluid of the plants from the freshly cut down tree branches, in their diet. The larvae usually intakes naturally available materials and they also eat the decaying logs.

The female Elephant beetle is supposed to place the eggs in small pits in the trees that are either dead or alive. These holes will be, most probably, the left out dwellings of some fowls or mammals. The larvae eats organic materials by staying inside that hole. They may also intake the decayed logs of their chamber walls.

The Elephant beetles reside in places of luxuriant, dense forest rich in biodiversity, in tropical areas with consistently heavy rainfall. They are capable of maintaining their body heat at a high level.

The Elephant beetle lives in different kinds of tropical forests and also in estates of tropical area and occasionally, in the leftover parts of forests at a height of about 1000 meters.
They are able to become a main destructive force, however, as an intermittent destroyer, particularly in Northern Queensland. It also becomes a pest to different kinds of lychee fruits that take time to get matured.
In many cases, the fruit as a whole or the loose branching cluster of flowers is harmed by the nibbling of the beetles. The upcoming leaves of the fruits are not harmed.