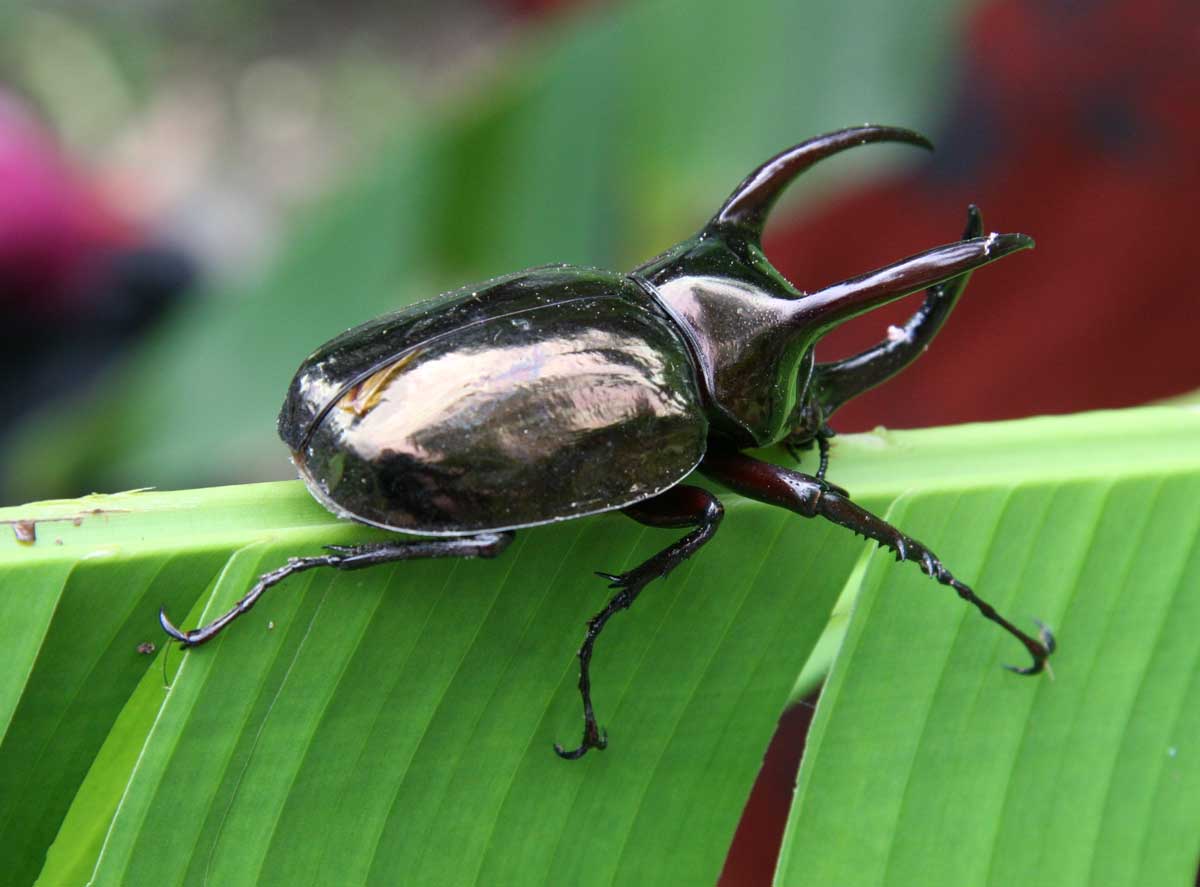 South East Asia consists of three big categories of Dynastid rhinoceros beetles, which are categorized under the genre Chalcosoma. It is said that they are the biggest and the utmost remarkable beetles in this universe. Of these, the biggest and the one that arouses our admiration is the Moellenkampi beetle, which is scientifically known as Chalcosoma Moellenkampi. In Greek, Chalkos means Copper and as the name suggests they have the glittering of a metal. The Moellenkampi beetles and other rhinoceros beetles coexist in a group called Scarabaeidae. The Moellenkampi beetles can be identified by their huge forward protruding horns, two on the chest and another one on the head which is a pointed protrusion.

The Chalcosoma Moellenkampi is not commonly found like other beetles belonging to its family except in Asia”s largest island, Borneo

The biggest among the family is Chalcosoma Caucasus. Males and females differ much on account of their physical measurements. While measuring from the topmost part of the horn to the edge of elytra, males belonging to this family may sometimes grow up to 130mm whereas that of Chalcosoma Moellenkampi as well as Chalcosoma Atlas may reach up to 110mm. Females don”t have horns and their size varies from 45mm to 60mm. Only experts can differentiate between the females belonging to the three Chalcosoma categories, as they have very much identical features. Males of Chalcosoma family can be identified with the help of the following features:

The anatomical dimensions of females can”t be identified easily.

Huge males are combative with each other while the smaller sized ones are rather placid as they don”t have the advantages like body size and big horns to compete with others. Though both vary a lot physically, they don”t differ much in the case of mating. Their reproductive organs, namely, parameters are almost the same dimensions, so that all males are able to copulate with the other gender. Beetles of Chalcosoma category reside mainly in areas having heavy rainfall and in estates of palm. They shift to new areas at night by winging. Usually males and females encounter in their eating places. Bigger males drive away the smaller ones in order to establish their power over the territory as well as over the females arriving there. If two evenly huge males come face to face, they oppose one another with their long horns, attempting to clasp the enemy in the midst of the movable head horn and the chest-horns, and also with anterior legs, straining hard to cast the opponent from the tree.

Small sized males of other beetles are rather cunning as they avoid visible confrontation with the belligerent bigger males and instead, they strive to copulate with females when bigger ones are competing with one another. Such demeanor is not evident in Chalcosoma Moellenkampi but in Chalcosoma atlas, two families of beetles have many resemblances, so chances of such actions exist.

The Three Horned Rhinoceros Beetleis not as common as Chalcosoma Atlas among its collectors, because even in confinement their uncontrollable temperament tempts them to combat with each other and thus get injured. That”s why we know only a little about its reproduction or rearing. Chalcosoma atlas larvae are bellicose in nature, and if disturbed, they are prepared to sting, as supposed to be the nature of Chalcosoma Moellenkampi.
Eggs are placed in holes either dug out of the earth or of some decayed tree trunk. There are three phases of growth of larvae until it gains up to a bulky weight of 100gms. In the final phase, larvae form a big elliptical protective covering in the rotten log or soil and change completely into pupa. In short, the entire duration from egg to a matured beetle is about 13 – 18 months.

The name rhino beetles include about three hundred categories of Scarab beetle. Their average life expectancy is unpredictable as a few of them live in tropical countries and some in North America. The life cycle changes according to the place they live. Females come up with around fifty white eggs. The eggs brood, and form larvae. Their larval phase is very much elongated and in some categories, it may take a lot of years. Rhino beetles have three stages of development that means, they undergo three molts before converting into the pupae phase. Finally, pupae progress into a grown up beetle. Adults take in only a little food like honey, plant fluids and fruits, but larvae eat the bulk of decaying timber or natural fertilizers.

Commonly adult beetles devour juice from the trees, but when we catch it, it can be given apple, banana, diluted maple syrup, or any other sweet fluids in cups of little depth. Fruits draw the attention of the flies so many beetle collectors use jam, which is very simple. Much care has to be taken while caring for the larvae. In addition to decayed logs and foliage, some used to give desiccated minute balls of dog food to the larvae as protein supplements while attempting to rear big beetles.

Rhinoceros beetles have specific males and females, which creates its offspring through intercourse in the course of drizzling. Males become hostile and some categories of rhinoceros beetles fight with each other with their big horns to win over the females. Though there are many differences in physical measurements, both kinds of males are able to mate with every female beetle. While the bigger beetles go on with their fierce combat, the smaller sized males cunningly approach the females without confronting the massive males as they don”t have the necessary physical requirements to oppose them. Females are able to produce fifty eggs and they place it mainly in holes dug into the earth. After going through several phases, these eggs become matured beetles.