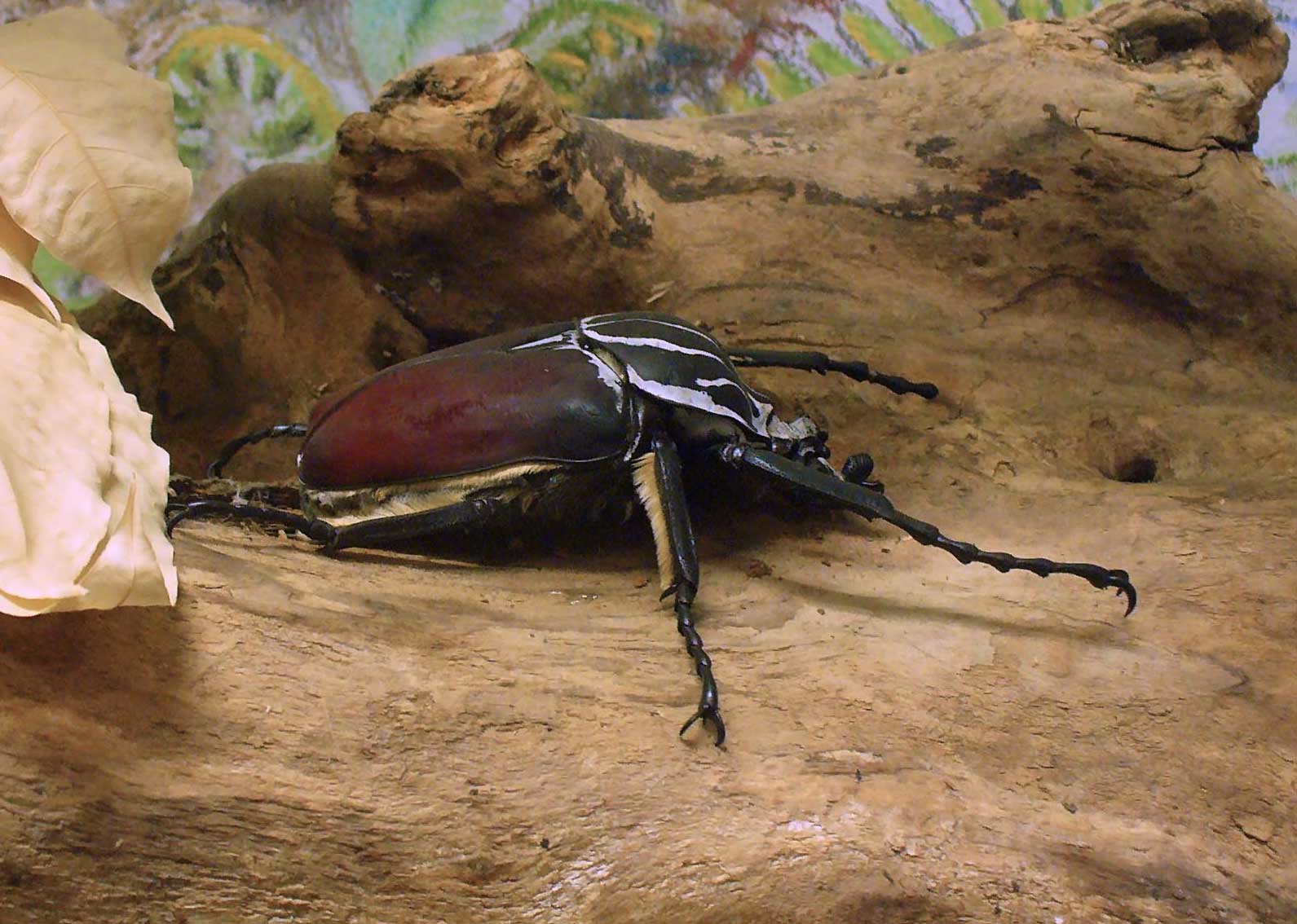 Based on their size, weight and bulkiness, the Goliath Beetles are amongst the largest insects on the planet Earth. These are called so after the giant in the Bible, Goliath. They belong to family Scarabaeidae and sub family Cetoniinae and the genus, Goliathus. Goliath Beetles are commonly found in the tropical forests of Africa and fruits and tree sap is what they feed on. Not much is known about its larval cycle in the open forests; however, in captivity, these beetles have been effectively raised from to adult from an egg by using commercially available cat and dog food, rich in protein.
The physical features of both male and female beetles vary distinctly, with adult males measuring around 2.4 inches to 4.3 inches and are normally a combination of brown, black and white in color. The adult females measure from 2 inches to 3.1 inches and in color, range from silky white to dark brown. Their size and stature easily make them one of the largest beetles in the world.

These beetles are commonly found in the tropical forests of Africa and prefer warm and moist climate conditions. One of their species is found southeast of the equatorial rainforest, which is a more temperate zone. The young larvae are skilled at excavation while the adult males are proficient climbers. Thus, during the adult stages of their life cycle, these beetles are found in the trees. The Goliath beetle is rightly referred to as the trash scavenger of the jungle as during all the stages of its life, they feed on the tree sap, dung, rotten fruits, and remains of dead animals.

The size and the environment, determine the strength of the Goliath Beetles. If they were to compete for the World”s strongest insects, Goliath Beetles would undoubtedly be the winners. Few scarab beetles share similar strength in terms of movement in size, but none has the similar movement of mass.

If one was to identify a Goliath Beetle in a forest, how can one do it? Firstly, it has two-third of its back body covered by its trademark reinforced elytra (i.e. Wings) and secondly when it flies around the second set of large membranous wings can be seen.

Going by the body mass, Goliath beetles are the largest insects of the world. These massive creatures grow up to 4.7 inches long and can have a weight of 4 Oz. Similar to other beetles, a hard exoskeleton covers its wings and is called Elytra. It provides protection to them under various circumstances. Like when a beetle is swarmed by a predator, it camouflages itself and blends into the surroundings. This is also very useful while attracting mates.

Each of the six legs of Goliath Beetle has sharp claws at its end. These claws are used for climbing; however, it does not necessarily mean that these would not hurt if it”s climbing on you. Unless the beetle is losing balance, these claws won”t hurt you. These beetles also have a distinguished pattern of brown and white or black and white stripes around their complete thoracic region.

One can instantaneously differentiate a male beetle from a female one. The males have a Y-shaped horn in front of their heads while females have wedge shaped heads. The males use this horn to lift things and also to claim their mating rights while fighting other males. Females use the head to dig burrows so that they can place their eggs.

As Goliath Beetles have a large size, the young larvae need a high protein-rich diet from the very beginning of their birth, in order to gain such a structure. Therefore, unlike other beetles, which lay their eggs in the bark or leaf, the female Goliath beetle does in peat as it is highly nutritive. The larvae quickly start feeding and digging into the soil. The rainforests offer ample of moist soil substrate and wet leaves for the larvae to feed on and carry on burrowing. It takes months before a larva can reach its full size (they can typically grow up to 5 inches.). Before it achieves its full size, the larva is ready to become a pupa.
In the pupal stage, it creates a thin cocoon in the ground and secludes itself off from the outer forces. In the cocoon, during metamorphosis, the pupa transforms to the adult beetle wherein the signature wings and other outward body parts start appearing. The adult beetle then discards its pupal skin and begins hibernating. This hibernations period continues till the dry season lasts. Once the dry season is over, the adult beetle appears from below the ground and sets off for mating. While in captivity, an adult male can live as long as a year, however in the forests, these adults die soon after the reproduction is over.

Goliath Beetles are believed to be mostly vegetarian when they are in the wild forests. When in captivity, these beetles show ravenous appetite for protein rich foods. These beetles are regularly fed cat and dog food available commercially.
Often these beetles are reared in captivity and compared to other Genera; these beetles show a greater need for highly protein rich food. On a regular basis, these larvae are fed pellets of dog/cat food which is buried inside the rearing substrate. In order to create a sustainable medium for larvae to breed, a substrate of moistened and decayed leaves and wood should be supplied.

Post mating, the female Goliath Beetle lays eggs in the burrow of the moist soil. A larva typically takes several months to grow into an adult due to its massive size. Each larva can weigh almost 100 grams; equal to a glue bottle used in schools, and can be around 6 inches long. The rest of the process of metamorphosis and its life cycle are already provided above. Thus the cycle begins to repeat. Mostly the adult beetles focus on mating and feeding.

These beetles are native to the African rainforests and feed on the dead remains of animals and plants. These huge creatures can grow up to 5-6 inches in length. These amazing insects can be kept as pets and need to be fed cat and dog food. Males are more attractive than females because of the attractive patterns on their back and the combination of brown, black and white in their color. These are large enough so that kids can tie a string around their necks like a dog and walk them. Also, these beetles are strong and are believed to lift objects up to 850 times their body weight.