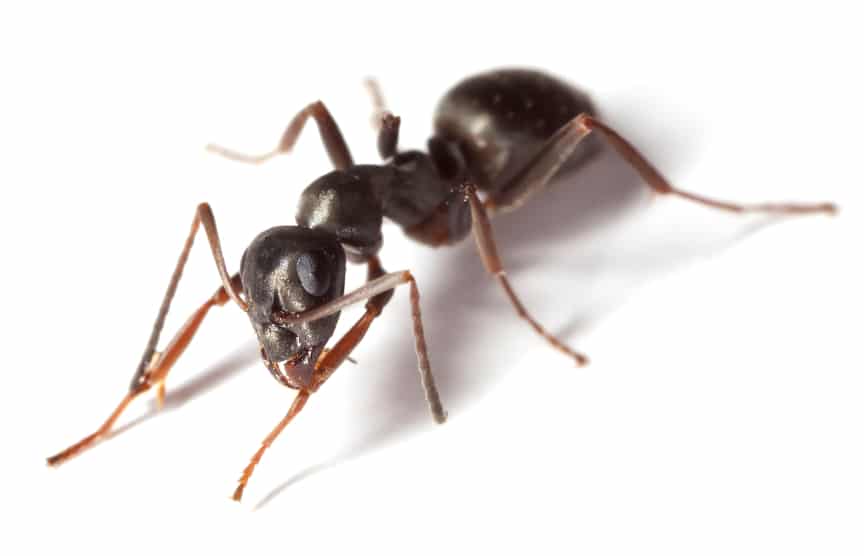 Fun article talks about how many legs do ants have

Ants, belonging to the  family Formicidae,  are “eusocial” (cooperative Brood) insects (along  with bees and wasps) that fall under  the order Hymenoptera.

Ants usually have six segment legs.  Every leg is sectioned and has two hooked claws, placed at the end of the foot. All these segmented legs are connected to the thorax, which is biologically called as Mesosoma. Hooked claws support the ant, so it can walk and hang on the surface. They use these claws for digging efficiently, climbing, sprinting and to walk quickly. These claws get hooked on the surface and therefore provide grip to their body.

Ants have large touch receptors. This tactile is very finely located at the feet of the ant and at the leg hairs. The touch receptors guide them about the nature of the surface onto which, they are walking. They tactile are also useful in communication with other ants.. They achieve the communication by patting the other ant’s body with its forelegs.

Similar to other insects, ants also have 6 legs and each leg with 3 joints. These legs are well built that help an ant to walk faster. These legs are so strong that if humans could ever get these legs, they can  run as fast as a  race horse.  Ant can also lift and carry  20 times heavier weights than its own weight. Walking with six legs is pretty much complicated. So like other insects, ants also adopt a locomotion method to walk. In locomotion, they divide their six legs into two groups. Each group has 3 legs. Locomotion is also called as “alternating tripod gait”. The second leg at the right moves with back and front legs of the left. While walking in locomotive manner one leg group touches the floor while the other swings in the air.

Reinhard Blickhan, chairman of  department of motion science in the Friedrich-Schiller University,  said that it seemed  like ant have two big feet, while  Jena, a student of entomology said that these 6 legs keeps the ant stable.

Blickhan and Lars Reinhardt (Blickhan’s colleague) reported a study about sprinting in the famous Biologist Journal: Experimental Biology where he expounds that the ant always fixes 3 legs on the ground. This is true, even when they are walking faster or running. They prefer to take longer frequent steps rather than leaving the surface, so as to maintain a better overall balance.

This is an amazing finding because many animals run off the ground while sprinting. Certainly, while running humans do this and it is named as “aerial phase’. Blickhan further explains that the Aerial phase is common among most of the animals as well, no matter whether they are four legged or two legged animals. One famous experiment that was done with photography showed that the  horse,  while galloping,  leave their ground completely.

Reinhardt was of the opinion that more the number of legs, more are the chances to put some of these legs on the ground. This is also applicable while running. This happens because; many of these creatures with multiple legs are small in size.
Blickhan also said that they now have learned that running on the surface is the gait, and it is frequent among the tiny creatures and this allows insects to run with no prior preparation to take off. Other than the ants,  Spiders, some birds, cockroaches and crabs also exhibits this sprint gait while running.

The Science of Running To understand the science behind the ants’ locomotion, it is important to have knowledge of kinematics and some study on ground reaction force. This will explain about the pressure the ants use to press the surface to move forward while kinematics will reveal the secret about how animals move on the surface. The earliest report  said that

Force Plates or equipment  is used to record the forces of ground reactions during the process of a body standing or moving across it. This device is also used to transform the mechanical energy from any object that passes through it into an electric signal. Reinhardt and Blickhan tried to record the force in ants and noticed that the present technology is not sufficient to fulfill this objective. This is because the existing technology’s force plate were used to study large insect like cockroach and therefore these force plates fail to work for under gram weight species. However,  you have the silicon made devices which work well with small creatures,  but the only drawback with these devices is: fragility.

To conquer these many problems, these two researchers have used their personally designed force plate. They made that plate using stereolithography and the  oldest version of three dimensional printing. Stereolithography has molded the plastics, and brought it into shape. Then they set the each dimension of the device with semiconductor base strain-gauges. As a result, the force plate became both sensitive and strong with the micronewton series.

Sheila Patek who works as a biologist at Duke University and studies mechanics of motion for ants as well as shrimp,  said that they have used some incredible fabrication method to adjust a force transducer at the feet of the ant. This is an awesome engineering achievement In fact, the high-resolution camera is also being used by these researchers to record and observe the trajectory of ant on  the surface.

Researchers have said that the ant can get the ability to turn and respond to its environment, if they keep at least their three legs on  the ground all the time.

Reindhardt mentions in his writings about ants,  that they are not only agile, but also crawling on the ground surface all the time and Blickhan added more by saying that the ants can turn quickly when they keep their legs on the ground. Since changing  direction of air to prevent ants from falling, is not possible,  therefore locomotion protects an  ant against falling while climbing  steep surfaces or walking  fast.

Researchers are very eager to find more regarding to the “neuromechanics “of ants’ locomotion. They want to know about the kind information an ant perceives from its legs? Blickhan says that the researchers can also assist in the expansion of micro robotics that is inspired by insects.