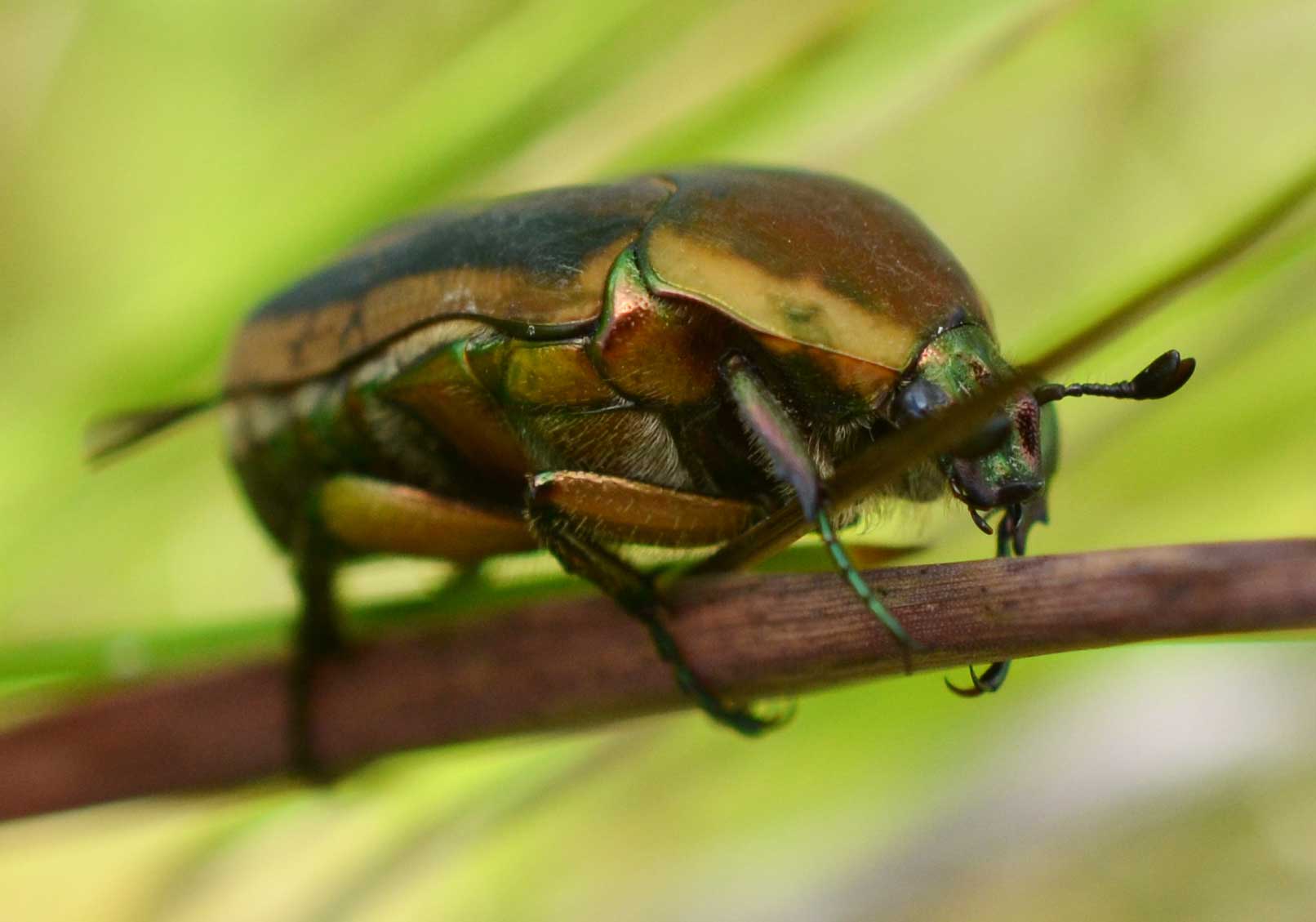 June beetles are also known as June bug or May beetle. These beetles are red-brown in color and during the warm evenings of the spring season, they commonly appear in the Northern Hemisphere. June beetles are attracted to lights at night and in the daylight, you find them under the bright windows and porch lights. These beetles are found all over North America. The name “June” was merely derived according to the month of the year when the adult beetles emerge from the soil.

The June beetles are large in size. They can reach about a size of 1.25 inches or more. These beetles are blackish or reddish brown in color and have three pairs of legs. They also have mouthparts for chewing. They have a heavy body which varies from 0.5 to 1 inch, with shiny Elytra.

June beetles have approximately three years of the life cycle. The life of the June beetles begins with the egg. Female beetles hide in the soil about 2 to 5 inches deep and lay their eggs in the mid summer season. Over a period of two weeks, they lay approximately 60 to 75 eggs. Initially, the eggs are elliptical but, as the larva develops they become spherical. Sometimes, the growth of eggs inside the larva is referred as the pupa stage. The eggs hatch in grubs in about two and half weeks. Hatching from the eggs, the beetles enter into their larval stage. With white grubs, the June beetles are brown headed at this stage. Before pupa stage, these beetles molt twice and go through three Instars. The larval stage of beetles is the most critical stage. In this stage the grubs are very hungry and they eat continuously. Larval beetles feed in warm summer season and during winter season, they feed under the soil. During the last larval Instar, these beetles dig deep into the soil in winter season to protect themselves. During this period, the larva turns into the pupa. The pupa stage lasts for three weeks. At this stage, the pupa begins to turn into metallic green color. After that June beetles mature into adulthood. To complete the cycle, the female beetle burrows in the soil and lay eggs.

The female June beetle lay their eggs in the soil. When first laid, these eggs appear white in color and elliptical in shape. When the larva develops, they become more spherical.

As a pest the June beetles cause damage to the many landscape plants and also to home gardens. In the presence of light in the night, these beetles are nuisance. In Habit, white grubs are subterranean. They feed on the roots of the young plants. They can cause damage to the young seedlings. As a result of larvae trimming off the roots of plants, these seedlings turn sorrel red and die. June beetles are also an agricultural pest; they affect a wide range of crops because their larva weaken or kill the plants. When emerging is large numbers, they may cause major damage. The grubs attack the garden and vegetable plants such as tomatoes, strawberry, raspberry and ornamental plants.

The term “June beetle” actually refers to many scarab beetles belonging to two different sub-families and several genera. They are named so, obviously due to their emergence during the month of June in the North American temperate regions.
The species of June beetles in the two subfamilies are: This beetle is commonly referred to as Green June beetle, June beetle or June bug that belongs to the Scarabaeidae family. It is a common insect in the southern part of eastern United States, and is often misunderstood as Cotinis Mutabilis species, which is found in the southwestern part. It is an active beetle during the daytime, and attains a length of 15 to 22 mm. It has pale metallic green colored wings, bright green head, underside of the body and legs, with golden colored sides. The main habitat of this beetle ranges from Georgia to Maine and also in the western parts of Kansas. This June beetle, commonly termed Fig Eater Beetle, Fig Beetle or Green Fruit Beetle belongs to the family of scarab beetle. Most of them mainly feed on nectar, petals or pollens. It is endemic to the regions of Mexico and southwestern parts of the United States. The adult beetle attains a size of 3cm, and has a semi-shiny green color on the upper part of the body, and a bright iridescent green color on the legs and the under part of the body. This beetle is active during the daytime, and has a unique buzzing sound similar to the carpenter bees. This species is also commonly called as a European June Beetle or Summer Chafer due to their similar appearance to the cockchafer. Its body size is around 20mm. They fly around the tops of the trees at the dusk period in search of a mate. They invade the houses through window panels as they get attracted towards light. Their habitat is across the Paleartic region, and is commonly found between the month of June and August. May Beetle – Photo by: Anders Sandberg

Pyllophaga is again a genus, consisting of more than 260 species of scarab beetles from the New World. The other synonyms for beetles of this genus and the other species belonging to the Melonthinae subfamily are June Beetles, June Bugs and May Beetles. They attain a minimum size of 12 to 35 mm, and possess a reddish brown to blackish body. They are nocturnal, and gets attracted to lights. Ten-lined June beetle, biologically known as Polyphylla Decemlineata is also referred to as Watermelon Beetles. They are again from the scarab beetle family that lives in Canada and in the western part of the United States. The adult beetles get attracted towards light and mainly eat foliage. When they are touched, they produce a hissing sound, similar to a bat. It is actually made by the wings, when pushed down. The air between the wings moves out and gets back forcefully, which is the main reason of the hissing sound. They are considered as a serious agricultural pest that affects many agricultural crops, as their larvae mainly feed on the roots of the plants, which may lead to its death. This is a beetle species that is endemic to France, Italy, Germany, Portugal, Montenegro, Switzerland, Serbia, Kosovo, and Voivodina.