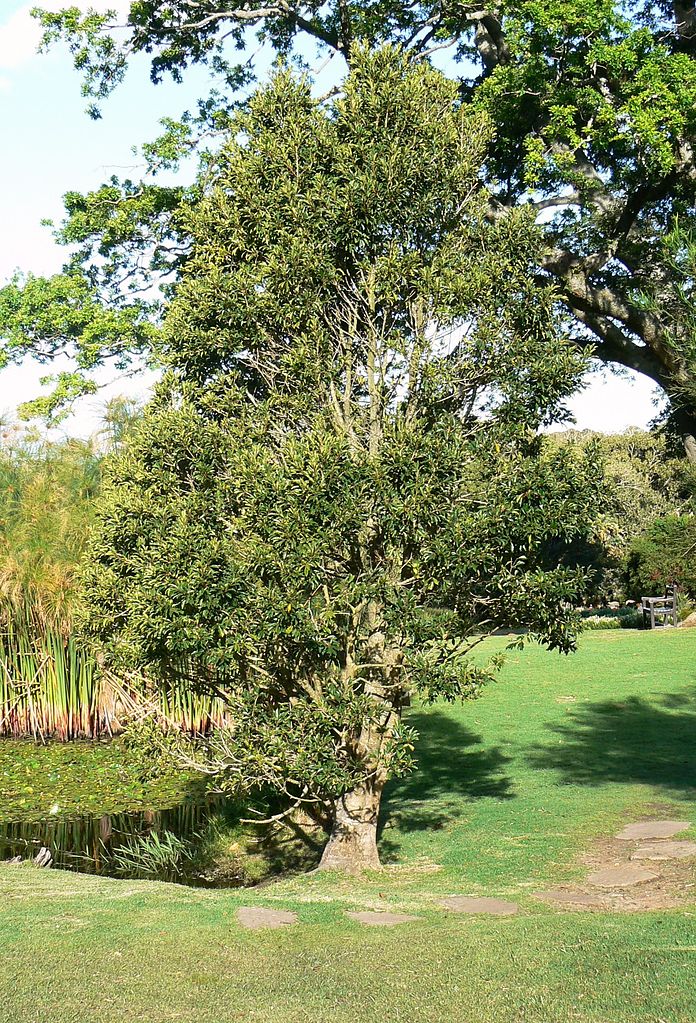 Holly or Ilex, belongs to the genus of 400 to 600 varieties of flowering plants of the Aquifoliaceae group. It is the only genus existing in that group. These varieties are deciduous and evergreen trees, climbers and shrubs from the tropical regions and temperate zones all over the world.

Most of the varieties of Holly are in great use as decorative plants in the European and temperate gardens and in parks. Holly – the European Holly in particular, i.e. Ilex Aquifolium  – is in general an important tree during the Christmas season. In several Western cultures, holly is considered a traditional Christmas decoration, they are of use, particularly for making wreaths and for pictures, for example in Christmas cards.

Irrespective of planting Holly as a separate tree or as hedging plants, the Holly tree (Ilex Aquifolium) is a preferred choice for use in landscaping. The evergreen glossy leaves and brilliant red color of the berries exhibits its prominence. Holly exists in several sizes in the range of 6 to 50 feet in width and height.
Christian History of the Holly Tree

The Holly Tree has a long history associated with devotion, health, healing and keeping evil from your doors. You hear fantasy stories that death and winter were ruled by the Holly King, while life and summer was the prerogative of the Oak King. The Christian religion also has its share of habits that are related to the Holly. The Holly Tree, being evergreen, the leaves can be made into wreaths in the winter months also. You also hear stories of how Christian men and women sought shelter behind a Holly Tree, whose leaves encircled them in safety when they were being chased by King Herod’s men, in persecution. With green sharp evergreen leaves and large, bright winter berries, the Holly Tree’s association with winter magic is a well known fact. All of Europe believed in the intrinsic ability of the Holly Tree to fend off evil, a belief that continues to the present day. Our ancestors, they say, used to bring home Holly boughs to invite the fairies to come to play. The genus Ilex is endemic all over the subtropical and temperate zones of the planet.
Plants belonging to this genus have ordinary, glossy, alternate leaves, that are classic with the margins of the leaf serrated or toothed. The unnoticeable flowers are white with a green hue and possessing 4 petals. Normally, they are dioecious plants, having female and male flowers on separate plants.

The tiny fruits of Ilex, even though considered as berries are drupes in the technical sense. They differ in colors from brown to red to black, and occasionally yellow or green. There are about 10 seeds in every “bone”.

The foliage of most of the Hollies is prickly and glossy. They are dioecious plants, having  male as well as female plants. In order for a female plant to create their brilliant colored berries, it is mandatory to plant a compatible male plant adjacent to it. Hollies exist in deciduous and evergreen types. The evergreen types are mostly less hardy when compared to the deciduous types. Their size varies from 6 to 40 feet in width and height, based on the variety. Birds are attracted by the berries.

We see this genus in different climates all over the world. The majority of them establish their homes in subtropical and tropical zones and all over the temperate zones. It is in the southeast parts of Asia and in the North and South America that we see vast differences in their species.

On the whole, Hollies grow well where the sun is bright and they get partial shade, and where the soil is properly drained and moist. Varieties such as the Inkberry (Ilek Glabra), are accustomed to wet sites. The majority of Hollies favors mild acidic soils, but a few of them like the winter berry (Ilek Verticillate) choose soils that are more acidic.

The height at which holly trees grow are 50 feet or more, therefore bear this in mind while selecting the place you intend planting your trees.

Augment the drainage of the soil and enrich the fertility by adding organic matter, like the compost in the topmost layers of the soil. Water the soil when you feel the upper layer dry to your touch; even though these trees are adjusting to a dry climate, they grow well when the moisture is reliable. The ideal time for planting your Holly is fall or spring. While planting, depending on the size it attains on maturity, space them at 5 to 25 ft apart. Dig a hole to the depth of the root ball and 2 to 3 times its width. In case the condition of the soil is poor, then alter the soil taken from the hole and add compost to it. Remove the plant with care from the pot and place it in the hole. Fill half the hole with the soil. Further, in order to get rid of the air pockets, water the soil sufficiently till it settles. After draining off the water, fill the hole with the remaining soil and water sufficiently well.

Never plant the holly in exposed sites where the soil is open to the cold winter winds or extreme summer sun.

The ideal time for planting your Holly is the beginning of spring, prior to the fresh growth starts. Add 2 to 4 inch mulch such as sawdust, chips of wood, ground bark, pine needles or much other coarse material to maintain the roots damp and cool. Never till the soil around the plant; will this upset the root system of the Holly plant.

In summer, while the plant is growing, maintain the soil moist. However, in the beginning of fall, permit the soil to dry a bit, giving provision for the growth to develop sufficiently and withstand damage in winter

In the prime stage of growth, sufficient water is required for your hollies. After the trees are set in the soil, normal watering will suffice. In winter, limit the watering. But at times of drought and when fall is nearing, prior to the freezing of the ground, additional water is required. Hollies can never tolerate very wet soil, therefore select a site which never retains water and give only the required quantity of water.

The tiny Ilex fruits, even though always considered as berries, are in the technical sense known as drupes; they differ in color ranging from red to brown and even black. They are hardly yellow or green.

The fruits get ripe in winter and so it is in winter that the dissimilarity between the bright red color of the fruits and the glossy evergreen leaves is seen. Therefore the sheared branches, particularly those of the l, Aquifolium are made use of at Christmas.

Normally the fruits are toxic to a certain extent to human beings, which leads to nausea and diarrhea if consumed. But as far as other animals and birds are concerned, they are an essential source of food, and help in the dispersal of seeds.

During every spring, provide the tree with a layer of compost widening it out up to the drip line (the area under the extremely spread branches). In order to have a control on the weeds and retain the moisture, supply mulch to a thickness of 2 inches and to a distance of a few inches away from the base of the trunk. During summer, in case the rainfall drops to less than 1 inch every week, water your hollies. Hollies do not require much pruning, but they are easily adjustable to heavy pruning for topiaries and official hedges. For optimizing the production of berries, pruning in the spring is good.

Feed your Hollies in the beginning of spring with fertilizers prepared for evergreens whose leaves are broad and love soil acidity. Rhododendron, Cotton Seed Meal, Miracid, and Cottonseed fertilizer and the like are ideal for this.

Pruning your Holly in summer or in the beginning of spring is a must, following pruning, Hollies bring out fresh growths but they are liable to damage when the temperature is low. This damage is prevented by pruning after the frost. After many years, when the plant becomes dense, it is convenient to prune your Holly to the desired form or get it trimmed as an eye-catching hedge. Besides from the thick Holly foliage, it is possible for you to shape Christmas decorations like wreaths. Because of the extreme weather conditions during winter, evergreen Hollies are susceptible to sun scald and purple spots. Besides, leaves are liable to undergo punctures caused by the heavy winds resulting in the spiny leaves sticking jointly. Spraying the leaves with anti-transpirant spray protects the leaves from the strong winds. The other option is to put up a strong wind barrier around your bare Hollies. A proper material for use as a barrier is Burlap. Keep away from the use of plastic, because it holds back healthy inhalation of air by the plants and facilitate the growth of disease and infection.

Inspect your Holly tree for sucking pests like red mites and scales. Mite problems are identified  by their tiny still bodies that resemble bumps on the twigs and leaves. Look out for destruction by scales, when the leaves turn yellow. Southern red mites are spotted by the damage that they cause since they are almost invisible to the naked eye. Search for leaves that turn bronze colored prior to dropping on the ground. As a means of biological control, release parasitic wasps on to the tree to control scales or predatory mites that manage mites. For damaging the pests in contact with the holly, smother horticulture oil on the full plant.

Examine your plants often in matters such as the usual infestation and illness connected to the rotting of the roots due to the pathogenic fungi. Investigate the color of the foliage of your plants changing into yellow and dropping prematurely, wilting, as well as the dying away of the branches. For managing such diseases, apply fungal pathogens. For instance, coat the tree with an effective constituent, like Etridiazole. For trees affected by Phytophthora root decay. Discard the holly trees that have been brutally affected. In their place, plant trees which are able to withstand these diseases, like the Chinese holly (Ilex Cornuta). This tree grows well in USDA hardiness zone 7 through 9.

Miscellaneous Evergreen Varieties: Apart from the above, we have the Inkberry (I. Glabra and also the Asiatic type like ‘Perny’ (I. Pernyti) and ‘Longstalk’ (I. Pedunculosa)